It only makes sense that the best part of the trip was the LAST part.  Traveling from Dublin, Marrakesh, Sorrento, Capri, Ravello, Amalfi etc. it was time to get back to our roots and visit where our families are from in Italy.  While I thought it was super neat that despite being from opposite parts of the world, Mike and I were both Italian, he was quick to inform me that southern and northern Italians are VERY different and do not necessarily like each other. A house divided once again... (go Jets).

Our first stop was a 3.5 hour drive straight from Ravello to Molfetta, or, the City of Gadaletas as I like to call it.  My father had always told us where my Grandfather grew up and spoke of a few family members that we are related to and still live there, Pasquale, Legia and their son Aldo. When planning out our Eurotrip Mike thought it was VERY important that we go see Molfetta as I should "know where my roots are" and see this distant family.   I found Aldo on facebook (as you do) and reached out to him. He was extremely quick to respond and, in true Italian fashion, tell us we were more than welcome to stay with them when we came there.   We drove our Wicked Van straight to their apartment and were told to follow them to their "country house" which was about 15 minutes outside of the city.  Meeting them was a incredible experience to say the least.  Legia is the one who I'm related to.  Her father and my grandfather were first cousins, so, I have no idea what that makes us, and my head hurts trying to figure it out, but theres blood in there somewhere.  When I got out of the car to meet Legia it was amazing.  She came forward, perfectly well kept, dressed to the nines, and all in blue.  She gave me a kiss on each cheek and then kept her hands on my shoulders and pulled back to look at me.  She had this huge smile on her face of pure amazement that it almost brought tears to my eyes.  It was like we had this instant connection and love for each other but neither of us could speak in each others language.  It's hard to describe that feeling.  Pasquale on the other hand, her husband, is the most outgoing, lively character we've ever met.  Immediately throwing his arms open to welcome us and speaking in very slow, very loud Italian so that we could try to understand.  Thankfully, Mike, unbeknownst to me, spoke perfect Italian and was able to be our translator. They told us that we could have their country house to stay in (giving us their master bedroom!) and Aldo would stay with us to help lock up and so that we don't set off the alarm every night (even though we did anyway and Aldo had to crawl through the kitchen window to turn it off ¯\_(ツ)_/¯  ).  Aldo, who's 32 and just recently engaged to his girlfriend (now wife!) Daniela of 9 years was the one who spoke the best english.  He and Mike immediately hit it off and looked and acted as if they've been friends for years. He told us that Legia and her 3 sisters all bought country houses right next to each other in a row.  All exactly alike.  I love it.

Since we got there in the early evening we were told to take a minute to relax from the drive, shower and then get ready for dinner which would be at a pizza place (yesssssss) and we'd be "presented to the cousins" (no joke, they actually said that, it was terrifying).  Once we got to dinner we were greeted with even more giant smiles and open arms.  My favorite part was sitting down to dinner and for once being on the other side of the language barrier.  Everyone was speaking fast in Italian and then once and a while would slow it down for us to try to understand and then Mike would respond back and somehow make everyone laugh.  8 years of Italian and I could understand almost every word but couldn't respond.  I knew certain words but I felt stupid for some reason speaking half english and then throwing out random words in Italian so I decided to just not speak at all.  Mike told me though, that thats just how you have to go about it.  It's scary at first but you have to just try and speak as much as you can to get the hang of it.  Funny thing is, when someone else spoke Italian and then added random english words in the middle of the sentence, it actually did help me understand, so why not try it back??

At one point Aldo and Daniela asked if there was anything we didn't like on pizza. We obviously answered no, so they went ahead and ordered for us.  The two big pies came to the table a few minutes later and were places right in front of Mike and I.  We thought it was a mistake and that we were all obviously going to share the huge pies so we pushed them towards the middle of the table.  Immediately everyone goes "nonono" and gave it back to us.  We quickly realized everyone ordered huge pies for themselves. Then, everyone proceeded to eat their ENTIRE pie.  Every, single, bite. Not a crust was left.  This was probably my biggest culture shock.  You couldn't leave anything on your plate or they would think something was wrong.  I started sweating. But we obviously ate it all.  At one point at dinner we mentioned how we wanted to check out this village called Alberobello about an hour away (google it...) the next day and Pasquale looked heart broken.  He told us he had plans to drive us to this castle that Molfetta is famous for and that it's even on the 1 cent coin, but if we'd rather go to Alberobello of course that was fine.  Immediately we were like "No! Just kidding, we'd MUCH rather do that" and he looked relieved and as happy as ever as he continued to tell us more about the history of Molfetta.  Legia had asked Aldo to ask me if I brought a hair dryer and I told her I didn't but not to worry I didn't need one.  She insisted she get me one to bring to the house but ASSURED her it was completely unnecessary. We finished the dinner, headed back to our new home and were well rested for the next day.

The next morning we woke up to a energetic Pasquale upstairs making espresso and with plates of croissants, fruit and yogurt.  We quickly "chatted" as best we could and made our way to Castel Del Monte.  Eager to give us a tour, Pasquale secretly bought two headsets without us knowing and shoved us inside the castle to get an audio tour in english and said he and Legia would wait outside for us saying that they've done it too many times before.  It really was beautiful. After snapping a pic outside the castle they told us we're going to head to Aldo's favorite restaurant and meet him for his lunch break.  This restaurant was exactly what you wanted from an Italian city along the sea.  All white, breezy outdoors, and the smell of fresh seafood everywhere.  We sat down and soon enough our table was FILLED with raw fish.  I had always heard stories of my Grandfather being captured in the war and escaping a refugee camp by making a raft and sailing out to sea and the only way he survived was by eating raw fish.  This is all where it came from.  Raw shrimp, raw calamari, raw sea urchin, and raw octupus. All of it, felt like it was legit plucked from the sea, rinsed off a little, and slapped on a plate. And....it was delicious (I don't understand).  Just when we thought our lunch was over, they came out with huge plates of Spaghetti Vongole for each of us.  I thought I couldn't possibly eat anymore food and then I had a bite and couldn't put my fork down.  I'm almost mad at how good it was because now I can never eat it again as it will NEVER be as good as it was at that restaurant.  I don't even like Spaghetti Vongole. 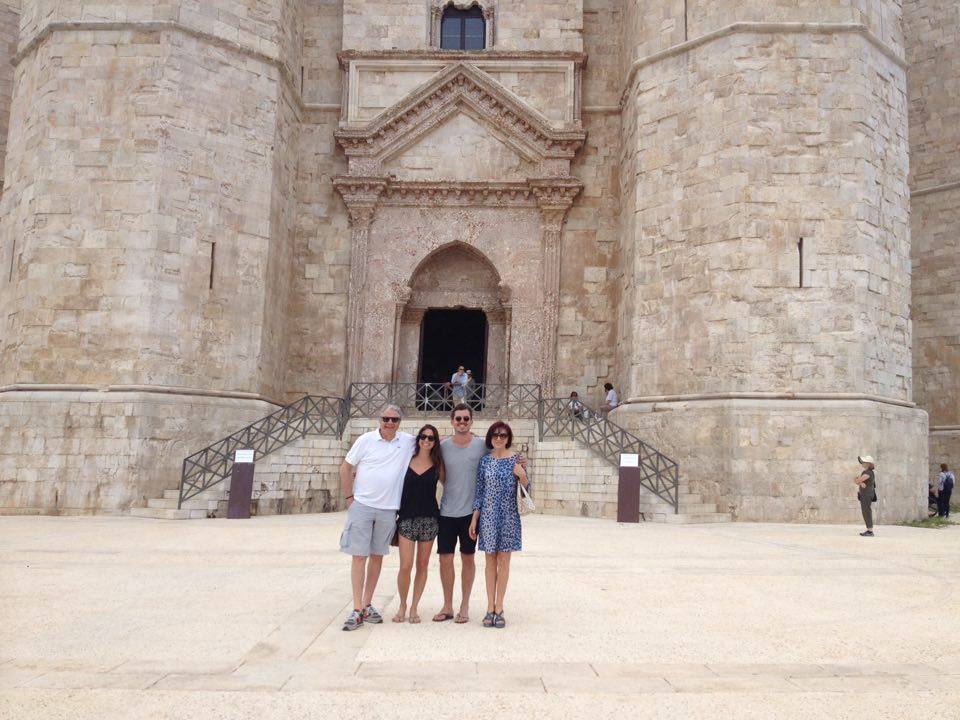 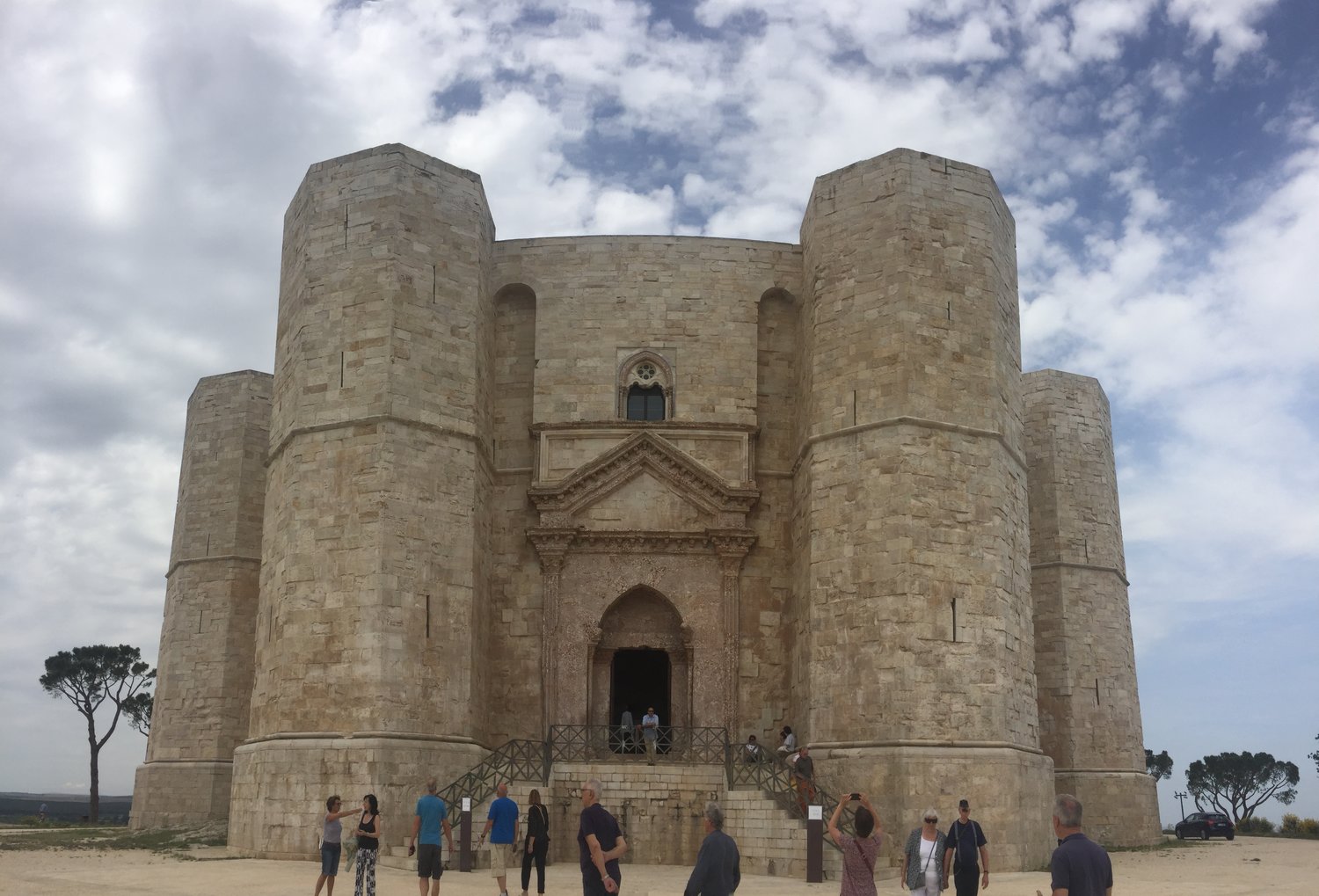 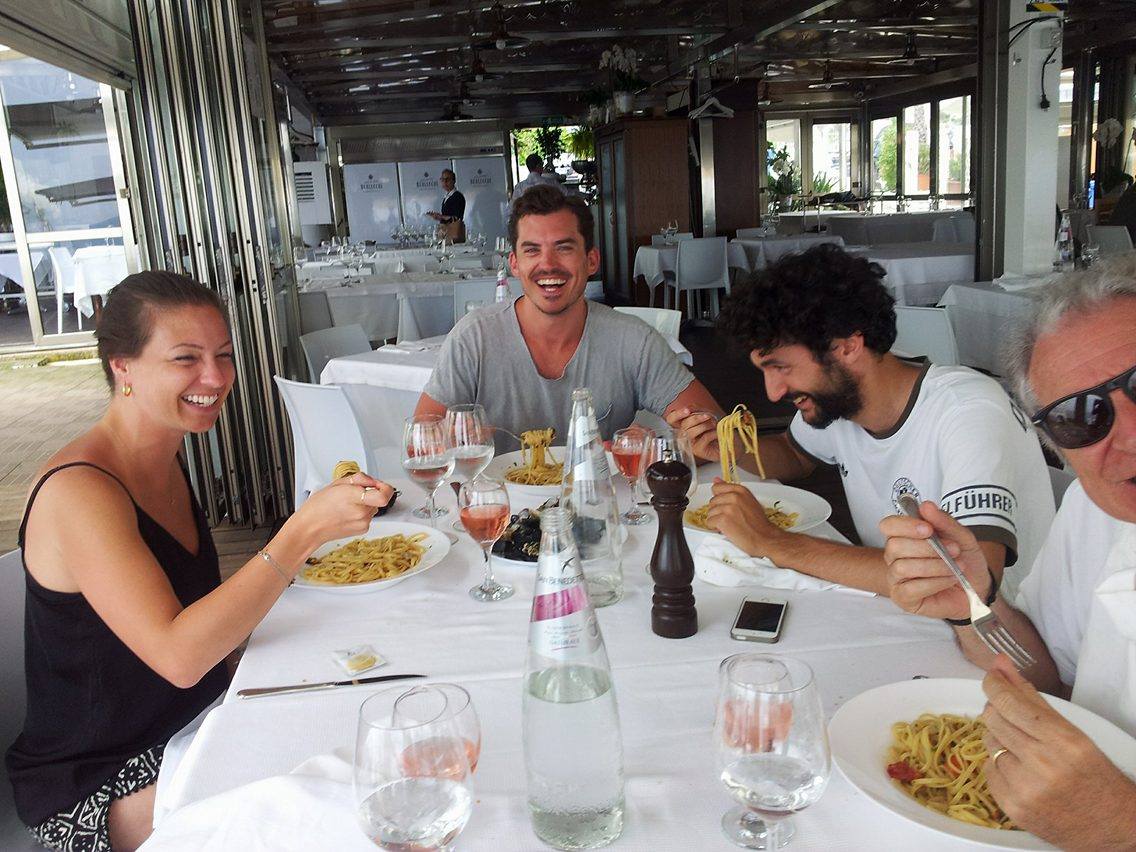 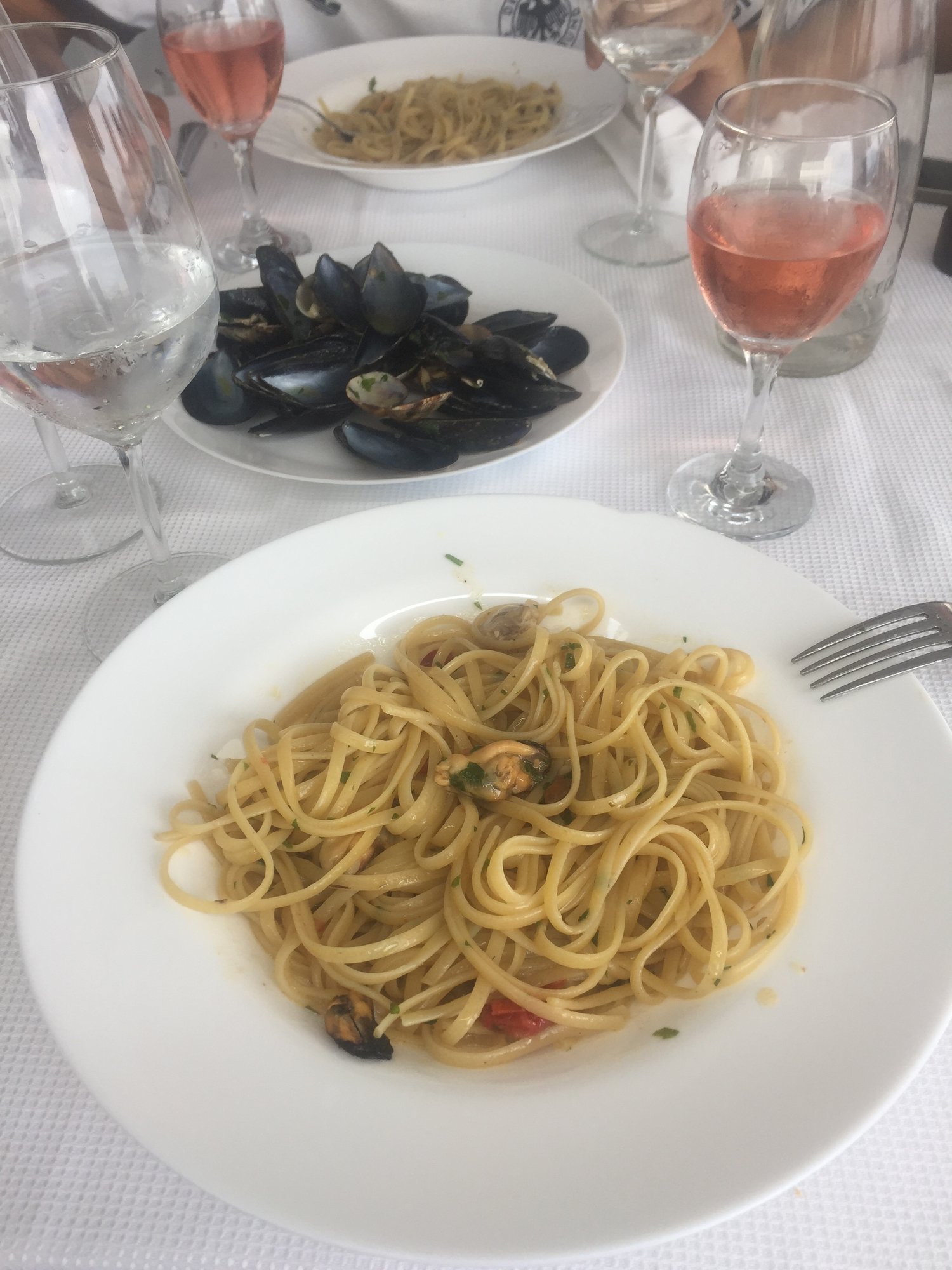 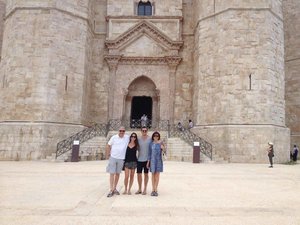 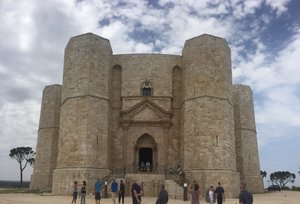 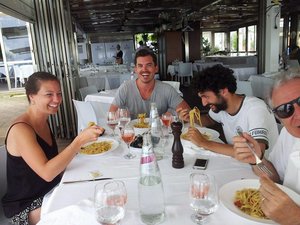 After that we finally got to walk around Molfetta.  I can't tell you how connected I felt to this city.  All of the buildings were a white-washed, clay color, ALL will the exact same green shutters.  That particular green is so famous to them it's actually called "Molfetta Verde".  Fun fact! My favorite color is green. I couldn't stop taking photos to the point where Aldo kept making fun of me and calling me green.  Cobblestone streets, cats EVERYwhere, and those green shutters, I was in heaven.  Pasquale is the type of guy where we'd walk around and he'd see that a museum or a church was closed, and Legia would be yelling at him not to try to go in and he would just say something loud in italian, throw his hands up in the air and continue walking in. Just when I thought it could get any better, Pasquale told us it was time for a siesta. Ahhhh yes. This is where I belong. 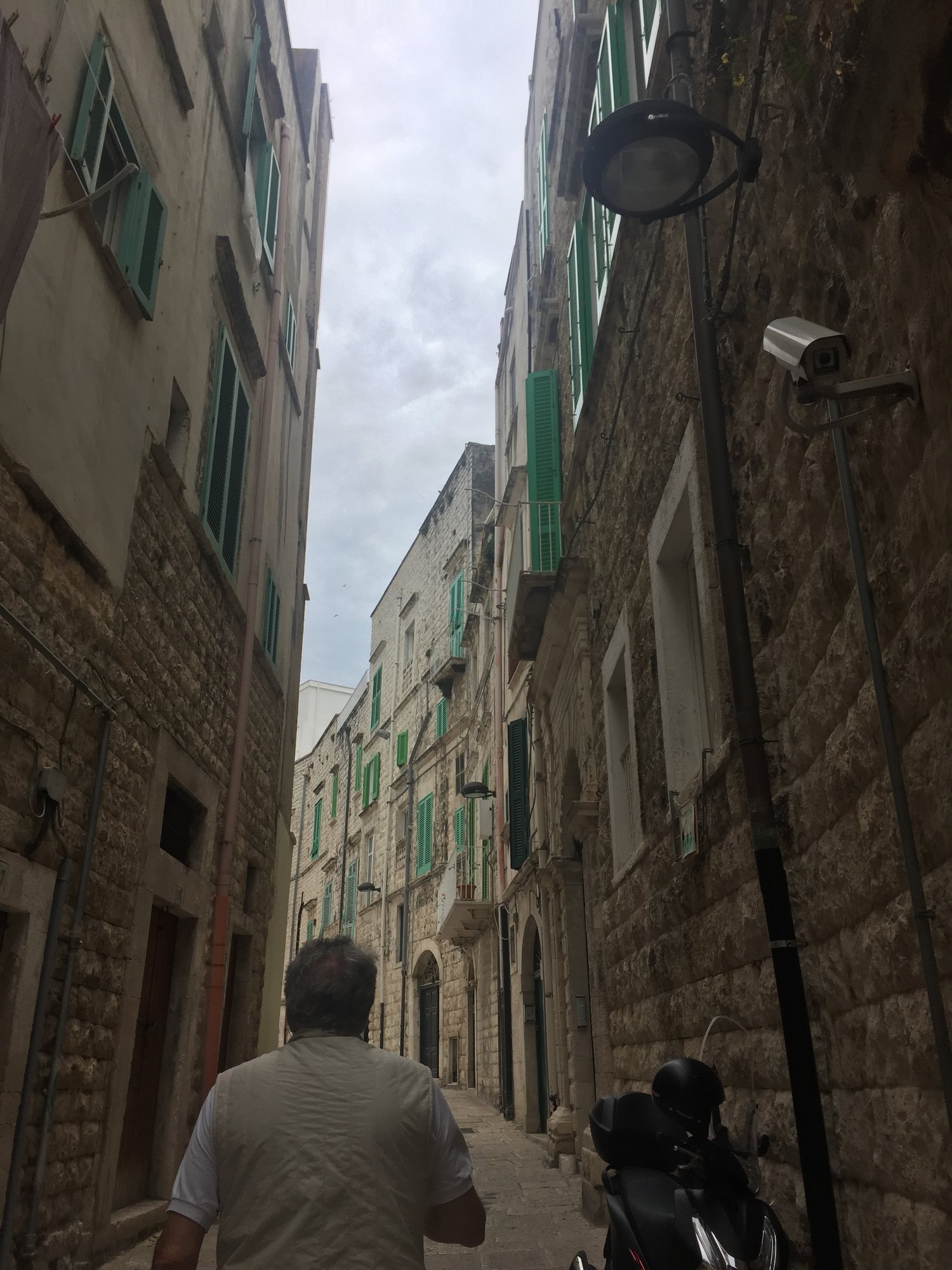 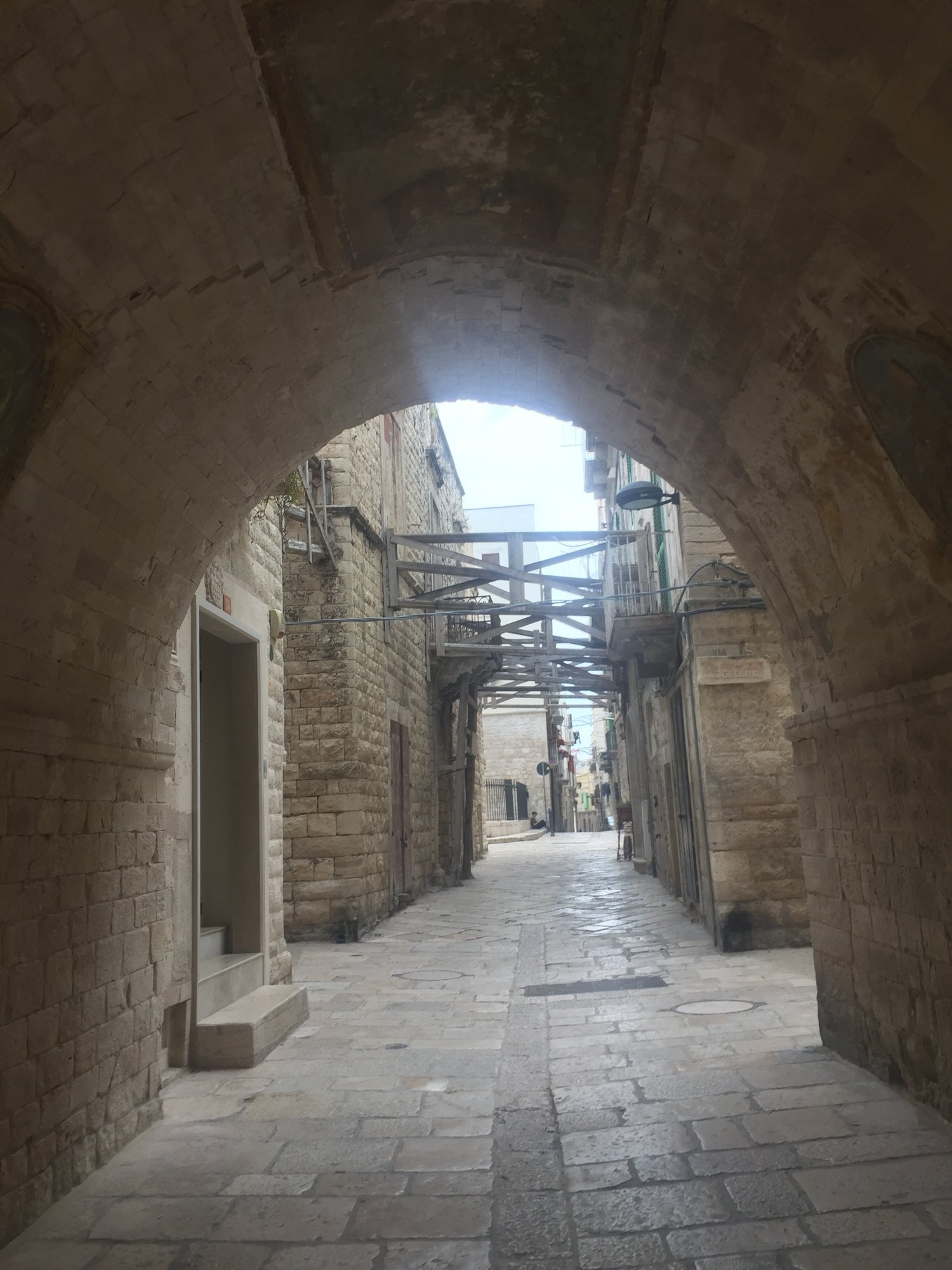 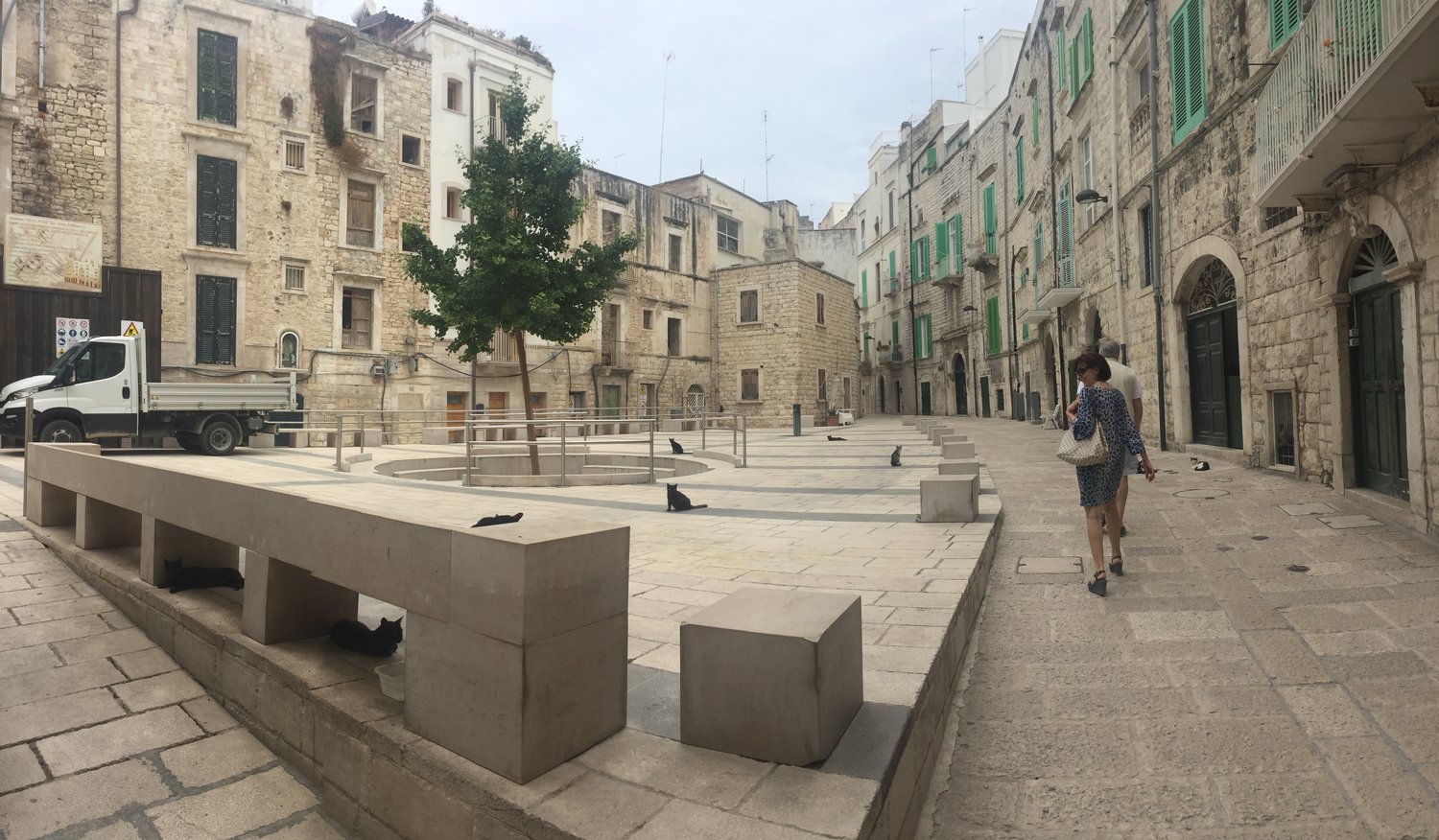 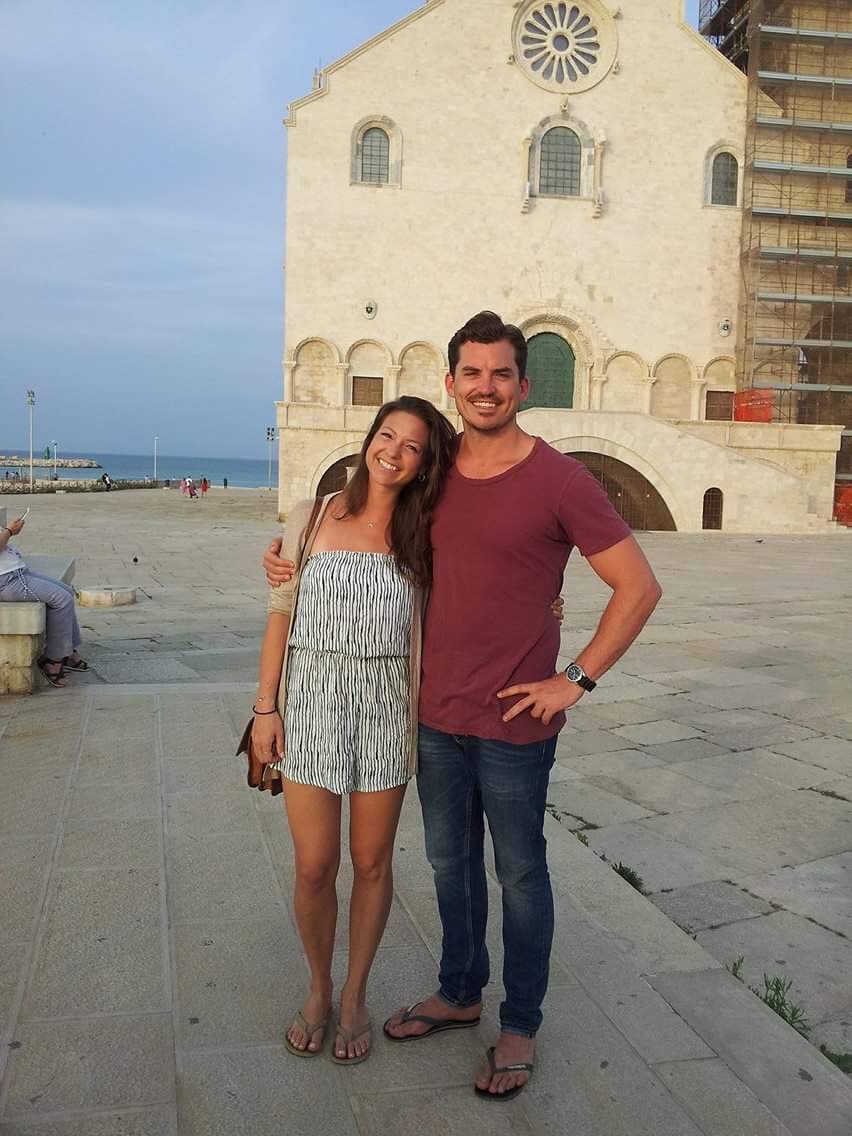 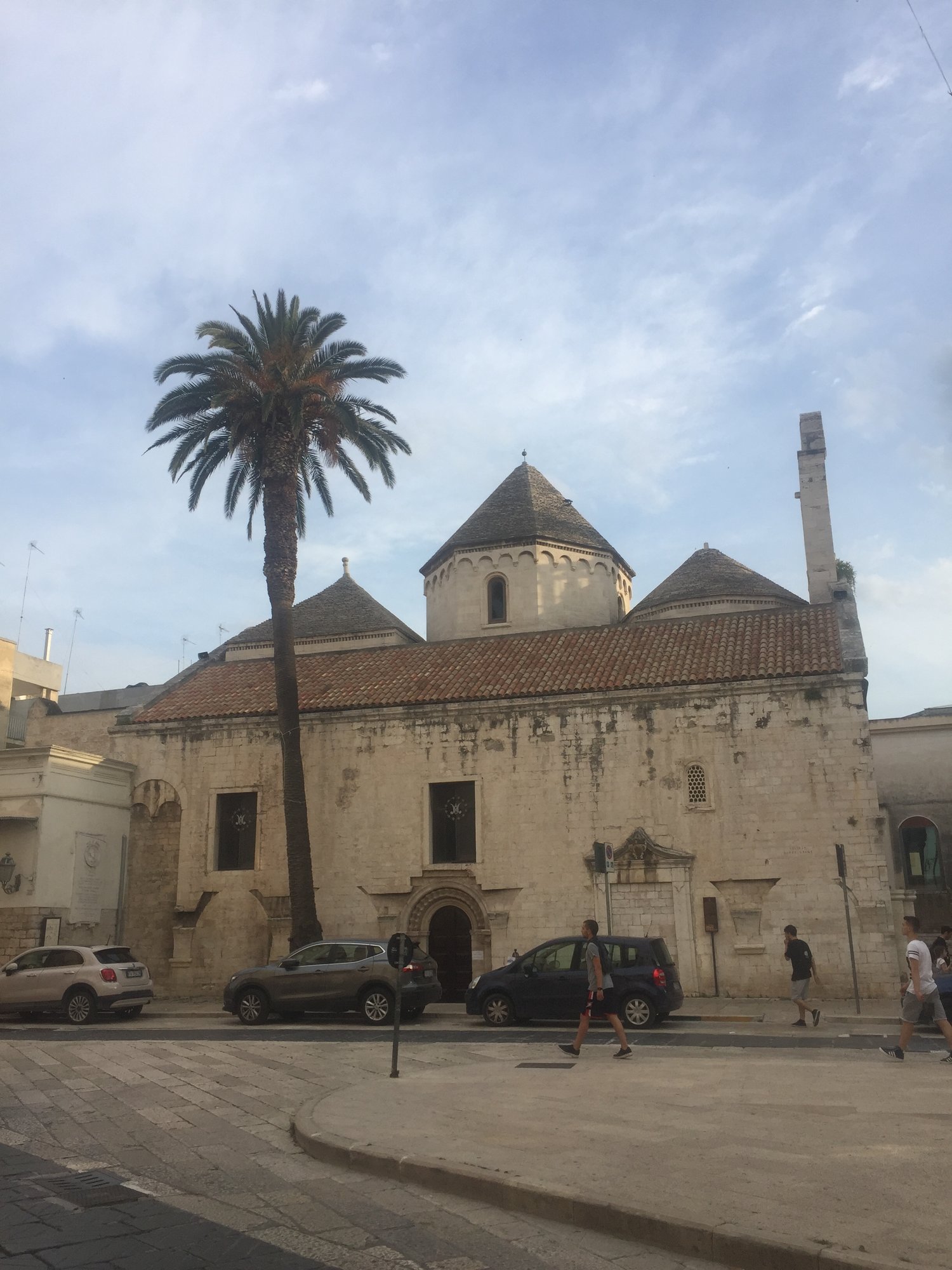 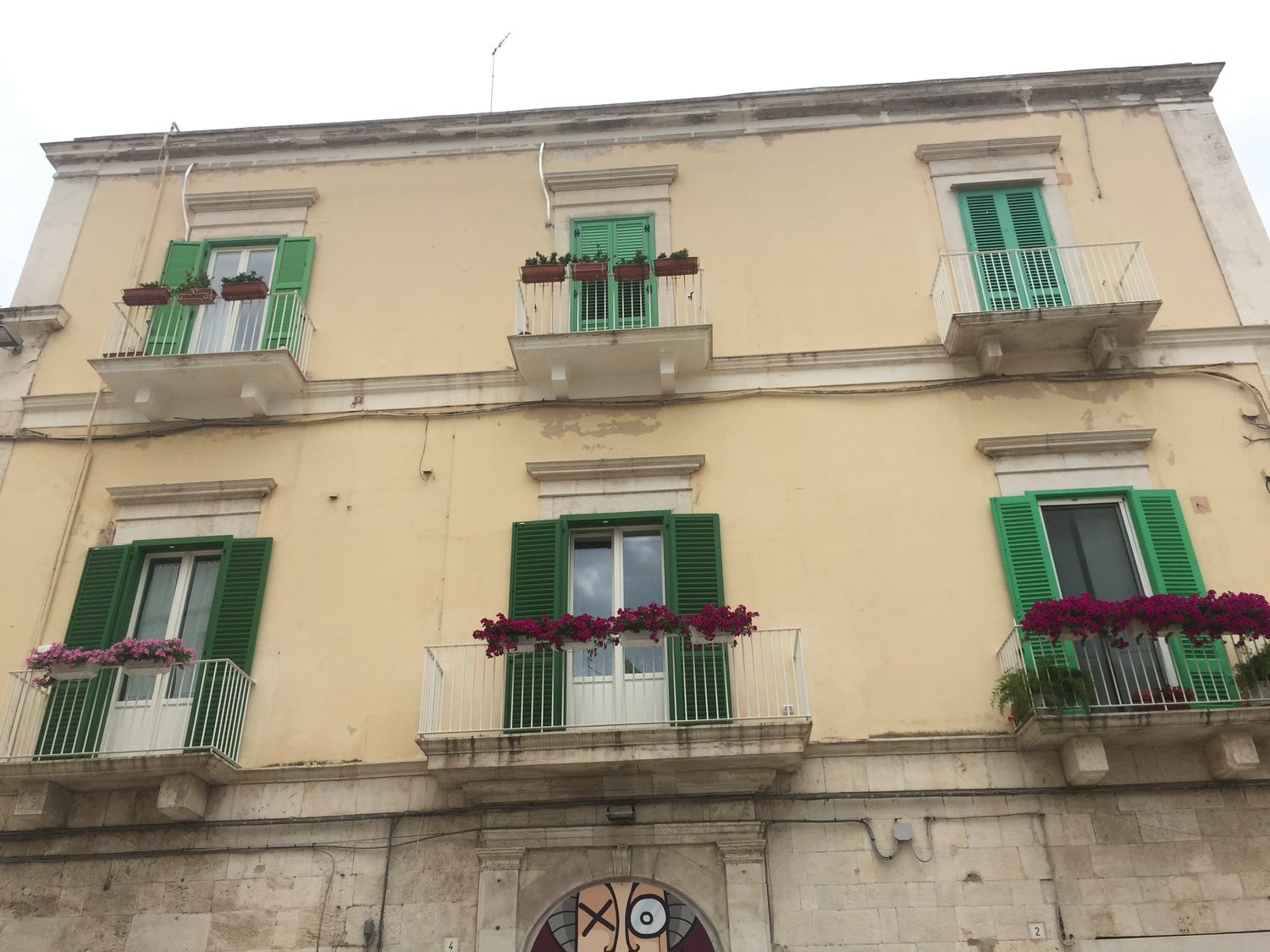 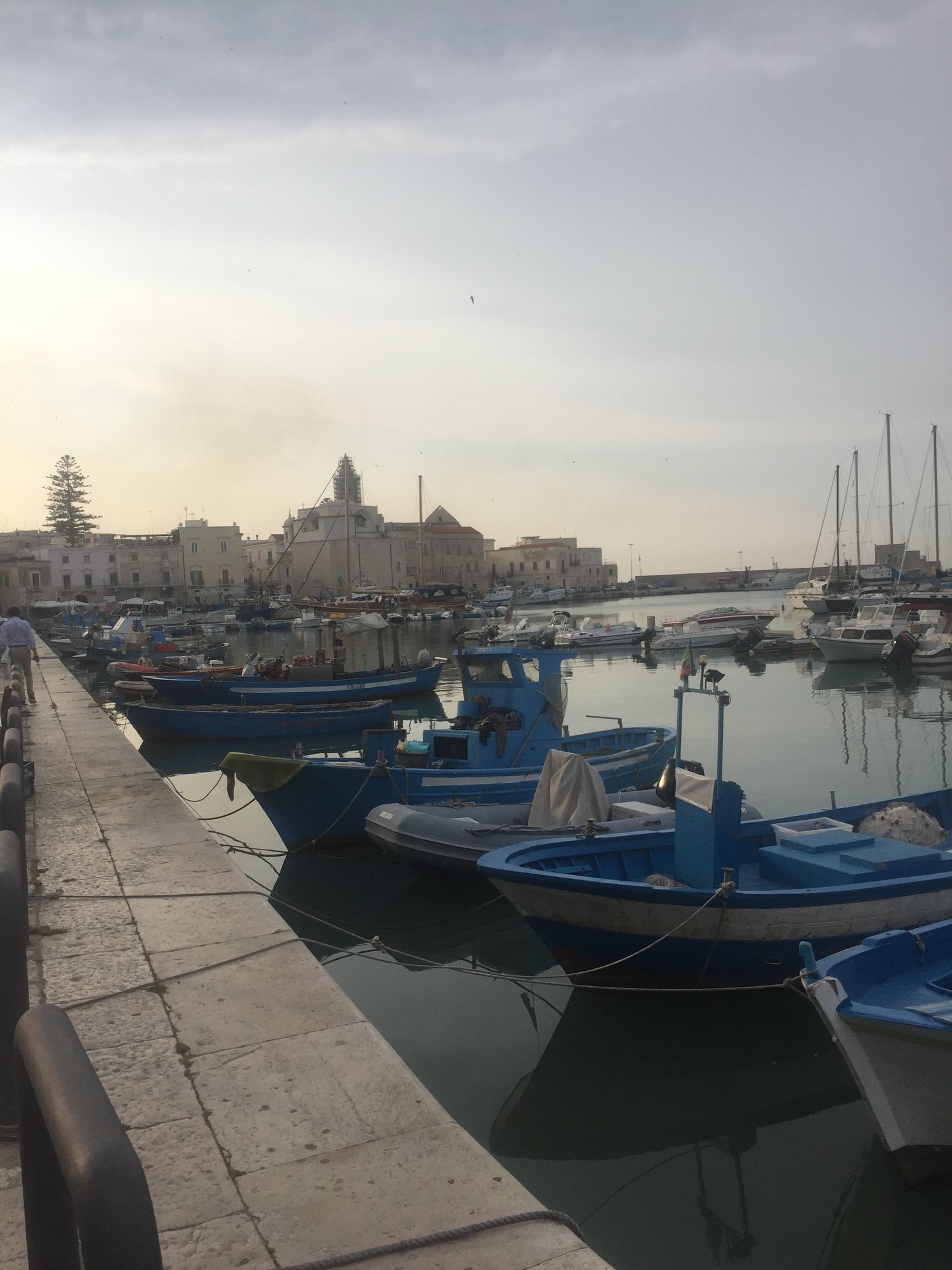 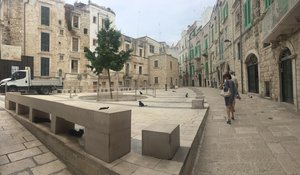 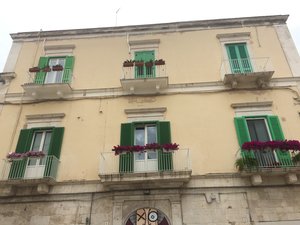 After a beautiful nap, the night continued and we were taken to Trani, an incredible city nearby to get some aperol spritz' near the water and talk about life and our families.  By the way, in all of this walking around and on cobblestone streets, Legia NEVER wore anything but heels, and we quickly noticed that all the women in Molfetta did as well.  You can't teach this type of class.  They drove us back and dropped us off before they went home to a burger place where we met up with Aldo and Daniela to grab a beer and sit and eat burgers at their favorite local spot.  After dinner Aldo kept getting a phone call from Legia. We didn't know what was going on but he drove the opposite way and we ended up outside Legia and Pasquales apartment.  We kept hearing Aldo say something about a foam, or a phone, we couldn't figure it out or why we were stopping at their place so late at night.  Aldo runs up and comes back down minutes later with a big bag.  He hands it to me and I open it up to find...a hairdryer.  Even though we were leaving the next morning, Legia had absolutely insisted, and I couldn't stop laughing <3

We woke up the next morning to the spread of croissants and fruit again and a sad Pasquale.  It was very hard to say goodbye but we promised to keep in touch and that if they came to NY that they would have a place to stay.  After Pasquale took about 20 photos in front of our wicked van, we embarked on our way knowing that we would see Aldo and Daniela soon as their honeymoon was in NY in a few short weeks.   Molfetta will forever have a huge place in my heart, but the show must continue and....onto the North!