People have been asking recommendations for things to see and do in Europe after my trip, so I thought why not write a blog post.  Please enjoy below the tales of us trying to navigate planes, trains and automobiles, sleeping in a van and injecting tagines and prosciutto into our veins. Will be doing this is two parts cause the trip was super long and my attention span for writing isn't.

NOTE: The words in bold are our recommendations

We were only in Dublin for a day, BUT we tried to fit in as much as humanly possible while ignoring the jet lag.  Immediately when landed we found a parking garage and went straight to a pub.  A friend of a friend told us about P.Mac's on Stephen Street Lower. It was PERFECT.  Huge burgers, cold Guinness and funky decor with mismatched furniture, dark wood and red candles dripping everywhere.

We decided to walk to the Guinness Brewery (of course) and it just so happens that the St. Patricks Cathedral was along the way.  Obvvviously you gotta see that. We didn't go in, cause there was a line and we're lazy, but it was cool to see Irelands oldest (founded in 1191!), tallest and largest church.

The brewery was way more modern than we expected, which we actually loved! There were about 7 floors, filled with either the history of the brand, teaching you what's in it, how to make it, and even interactive technology which gave us all the Minority Report feels. The best part was the top floor which had 360 views of the city :)

We then drove across to Ballina (pronounces Bal-in-AHHH, seriously you have to basically scream the "ah") which is west of Dublin.  Since we didn't get a chance to see the Cliffs of Moher, we found another good site seeing spot called the Downpatrick Head which was an unbelievableeee cliff and apparently less touristy which is always better. 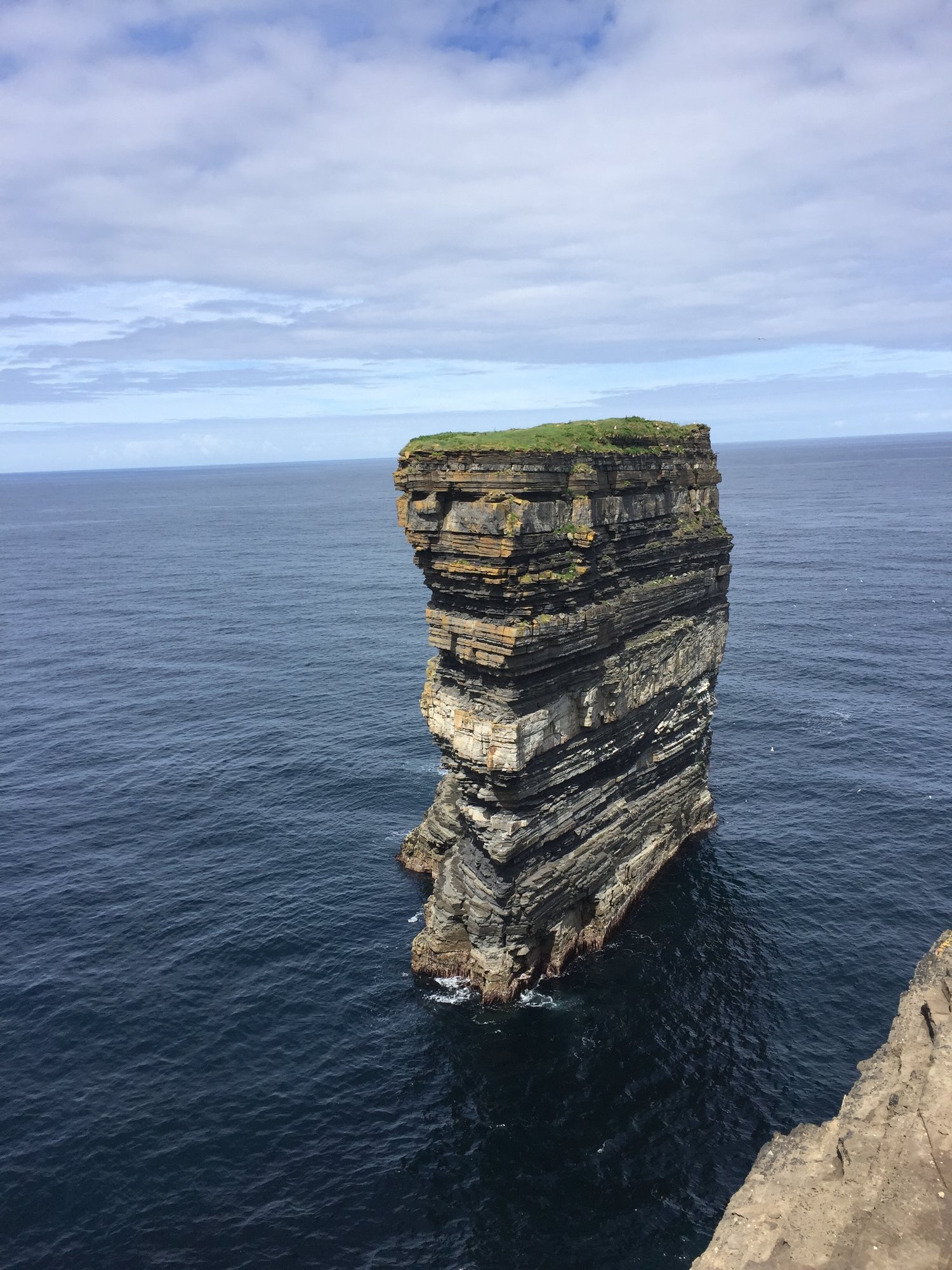 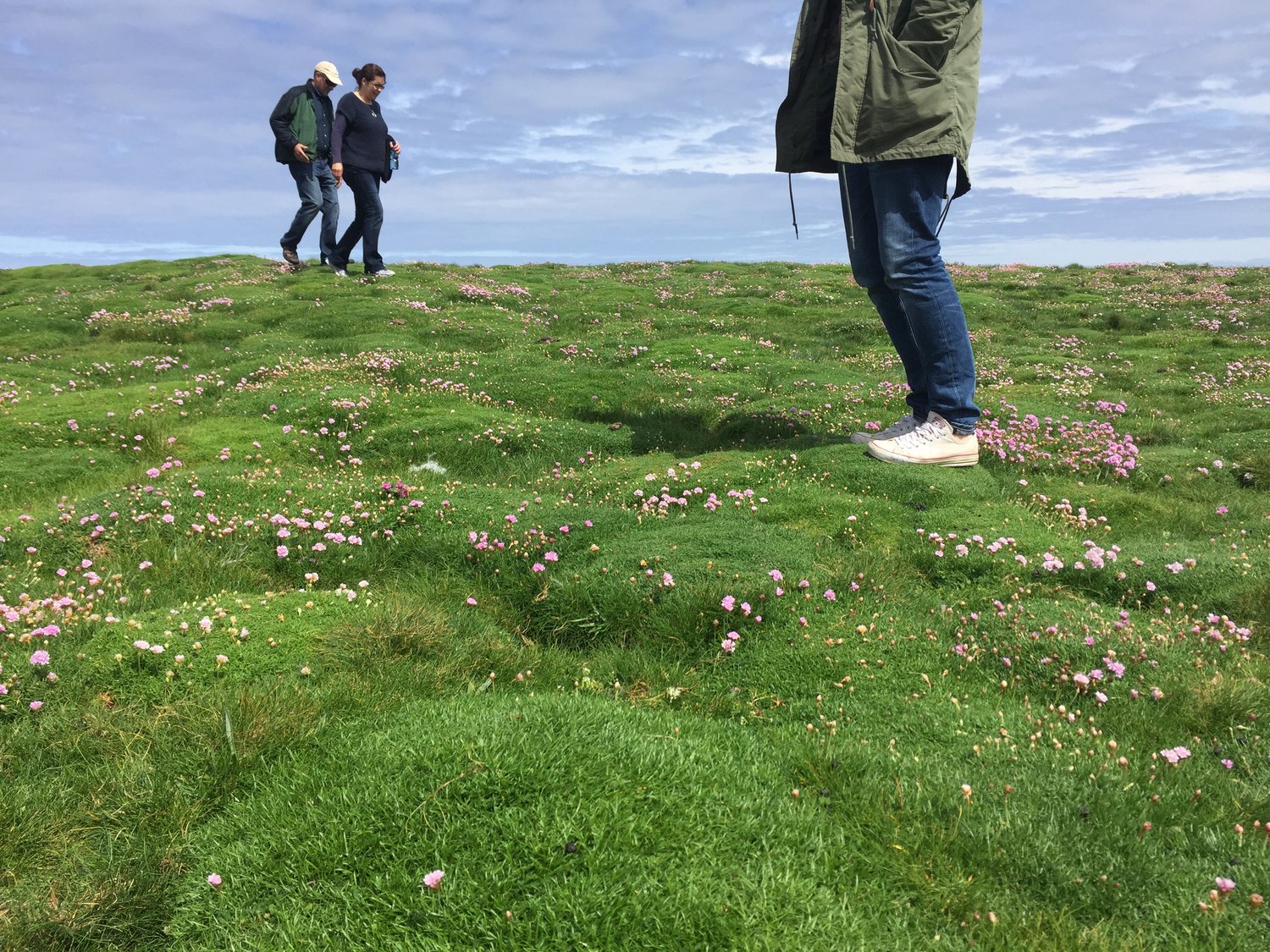 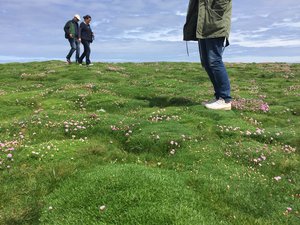 Getting to Morocco was SO rewarding to say the least.  After waking up at 5AM (the day after a wedding..) driving 3 hours to the airport, flying to London, MISSING THE CHECK-IN FOR OUR NEXT FLIGHT BY 3 MINUTES, having to re-book another 2 flights from the other London airport which was an hour bus ride away, layover in Casablanca where we took a van to our plane which was apparently 15 minutes away on the tarmac and the guy didn't speak english and we thought we were getting kidnapped...........................

We stayed at the Riad Idra which when the woman opened the most beautiful ornate door, perfume and air conditioning slapped us in the face I almost cried.  Oh and they had a house cat named Happy, if so facto, Kemi was happy.  Your Riad should be your saving grace in Morocco, cause let me tell you, the rest is pretttty shady.  I absolutely loved every second of it as it looked like a dream or something out of Aladdin but you are ALWAYS guarded.  Guys will come up to you left and right screaming and throwing things at you and then snatching your phone to take a pic and then charging you for said pic. 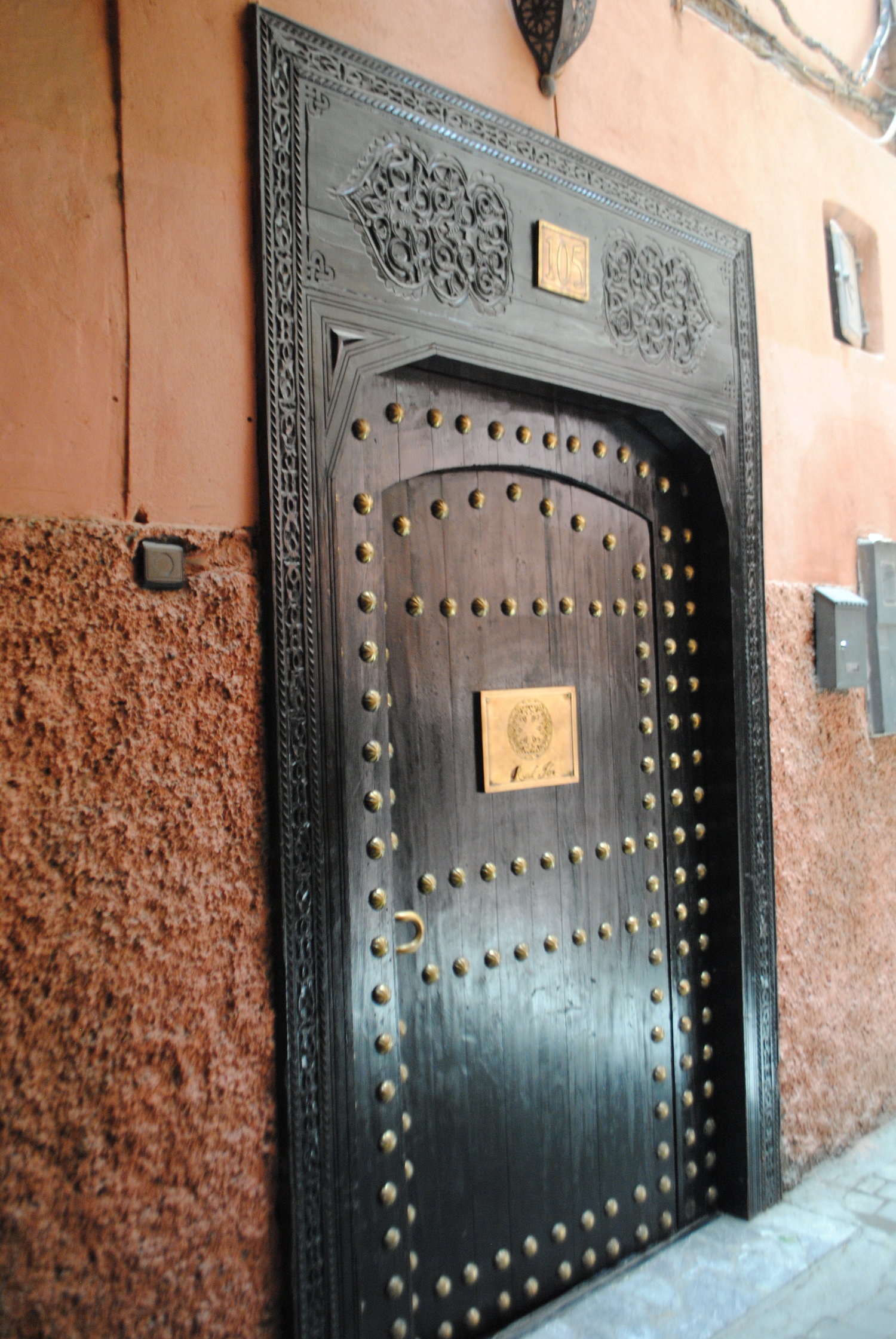 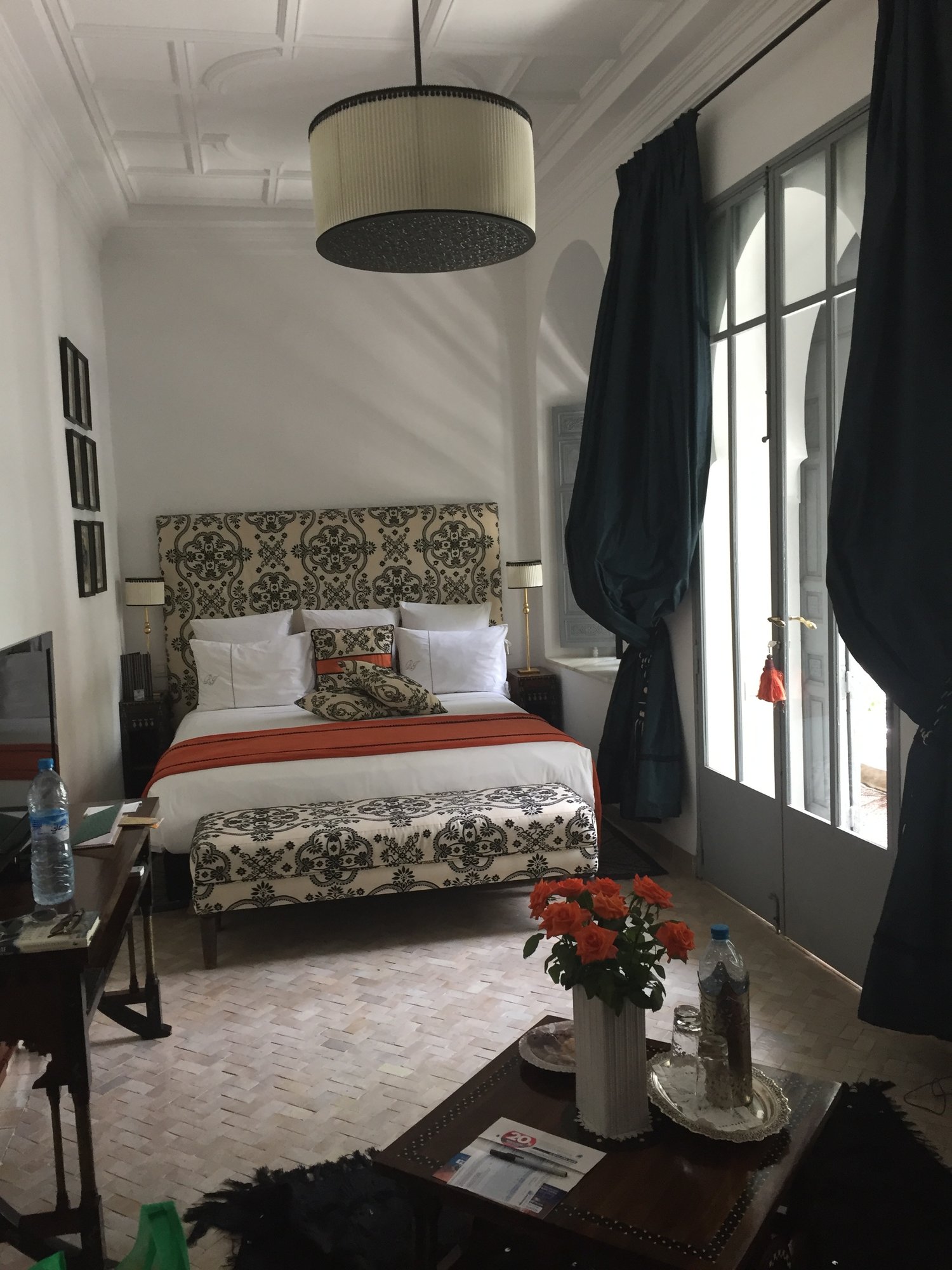 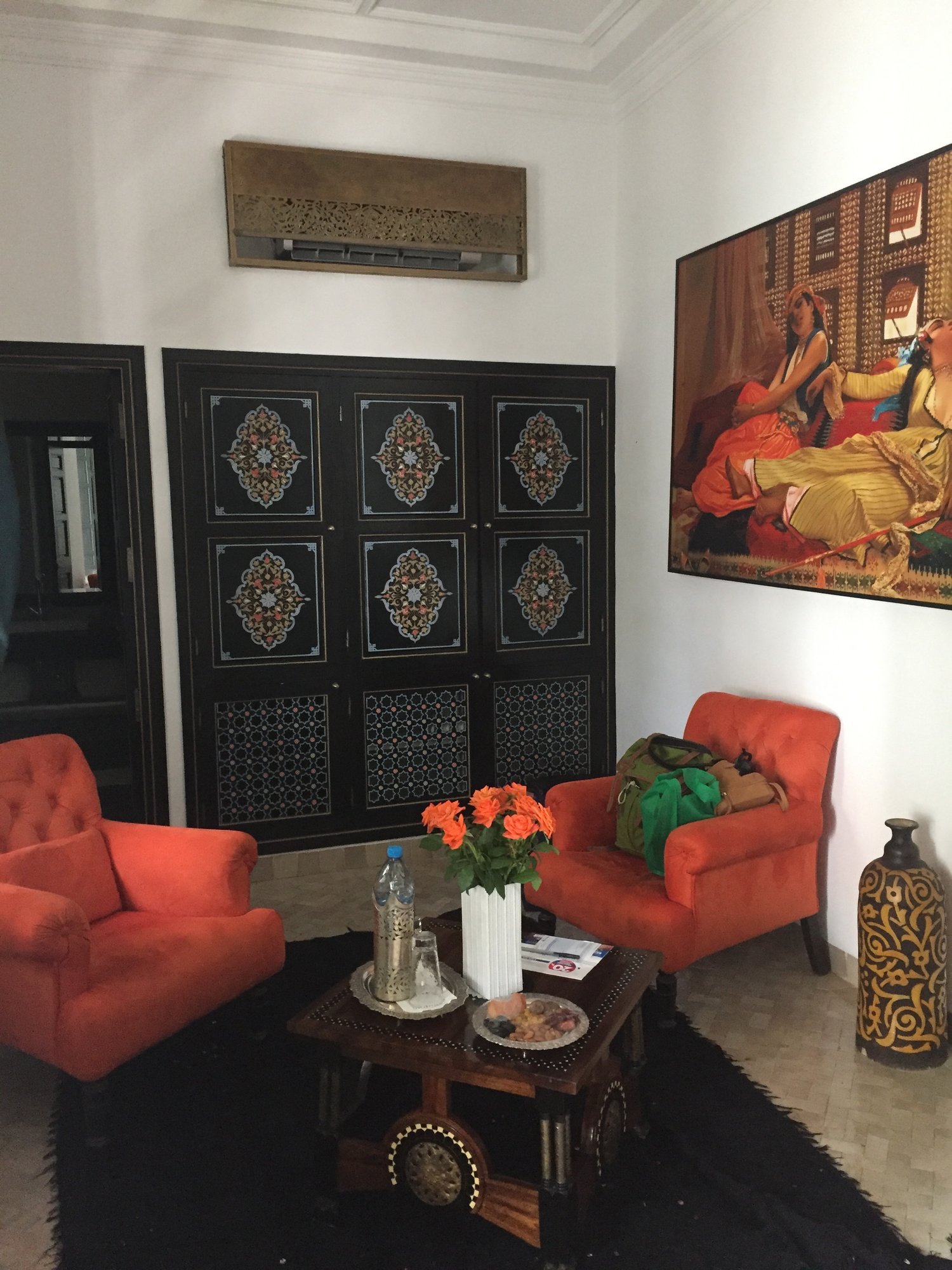 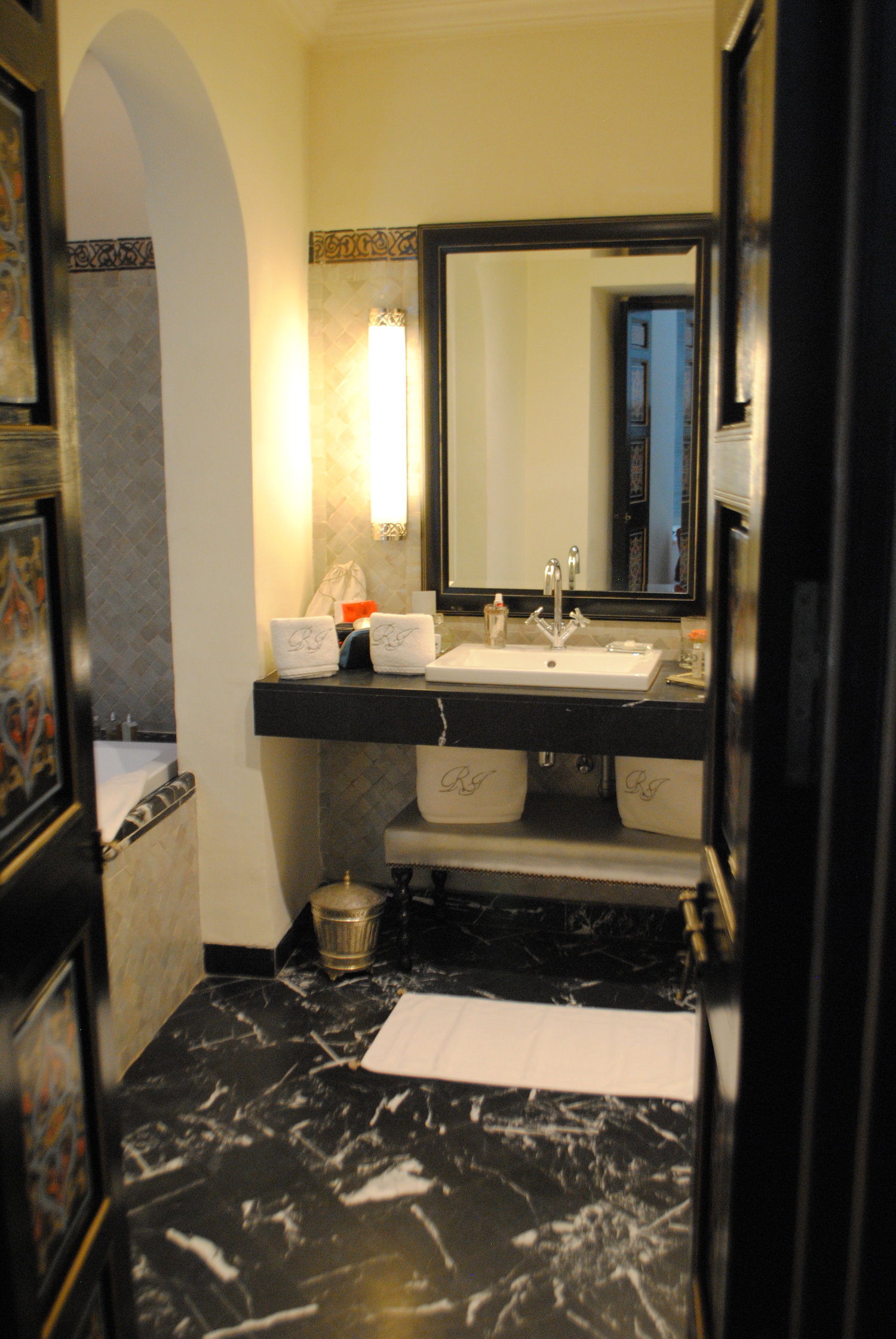 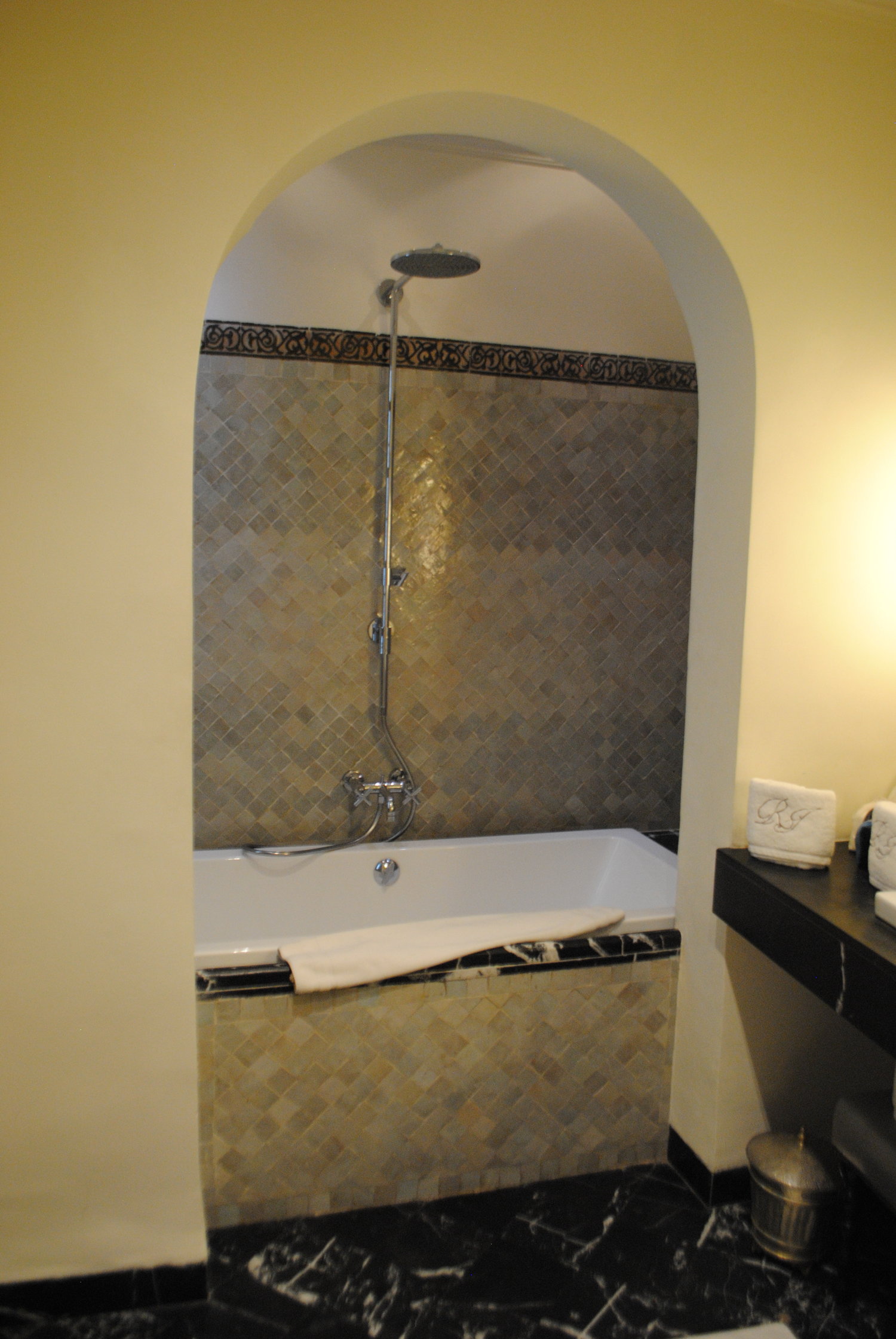 The first night we landed we went straight to dinner at Comptoir Darna.  This place was huuuuge. Red couches and walls with such extravagance that it gave off a bit of a Vegas feel.  We sat in our dark little corner and ate Tagines and veggies and 20 different types of hummus while watching belly dancers and men swinging their hats around while clamping little symbols on their fingers.  Definitely a tourist spot but it has to be done.

The next morning we woke up and remembered they said breakfast was included and will be served on the roof.  So after forcing myself to change out of my luxurious robe and tasseled pink slippers we wandered upstairs.  After roaming around past daybeds and tiny nooks we stumbled upon a big round table with two chairs and place settings.  There was not a single other soul up there.  So after staring at it, waiting for it to talk back to us and tell us it is in fact for us, a man came up dress all in blue and told us to have a seat.  No menu, no questions asked, he just started bringing out trays and trays of drinks and food.  First fruit smoothies, then coffee, then orange juice, then a bread basket with jams, egg tagine (I think it was?), fruit cup, yogurt and another basket filled with dessert bread.  Even their butter came perfectly wrapped up in twine in one of those things the rose is held in Beauty and The Beast. Heaven.

A must do is the Souks.  These are the crazy markets you hear about where they sell everything from lanterns to rugs to slippers.  If you're buying stuff for your apartment THIS is the place to go.  Really wish we had more room in our luggage but made away with two leather bags, couple bracelets, dishes, a leather pouf and some slip on shoes.  The trick here is to negotiate EVERYthing.  Never pay the first price they tell you. Oh...and there were cats everywhere <3 (don't worry, I won't post the 5,6789 photos I took of them) 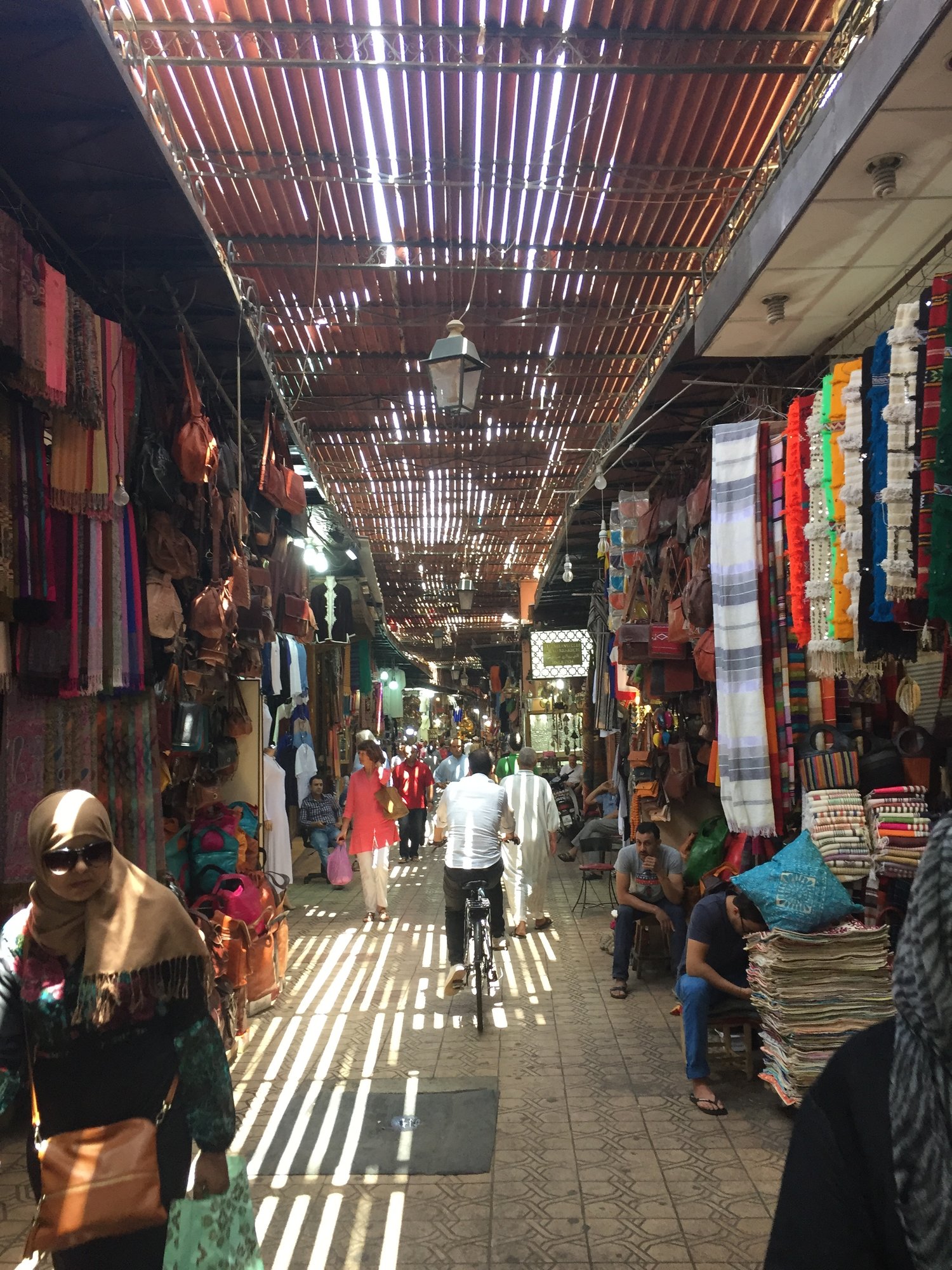 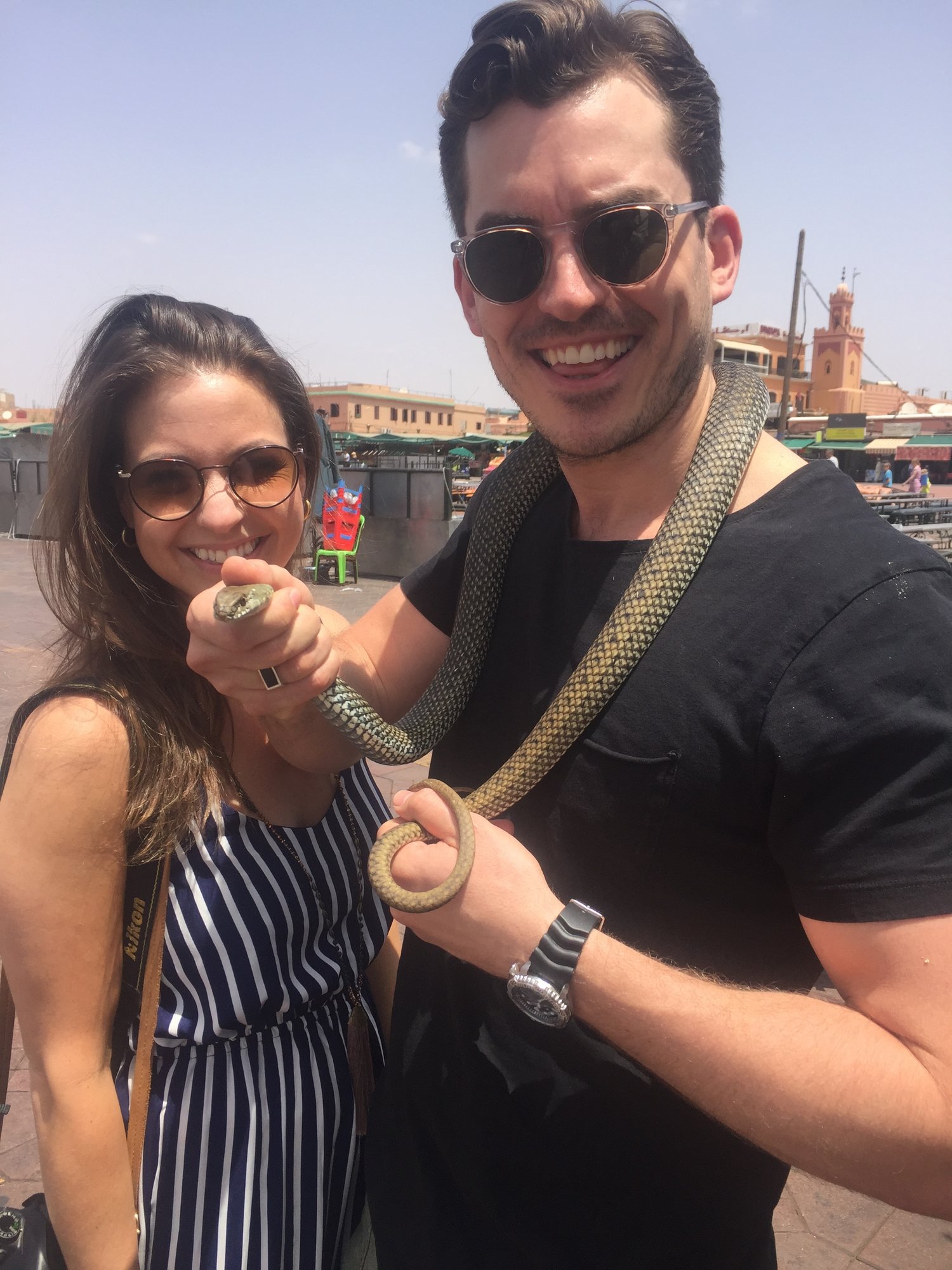 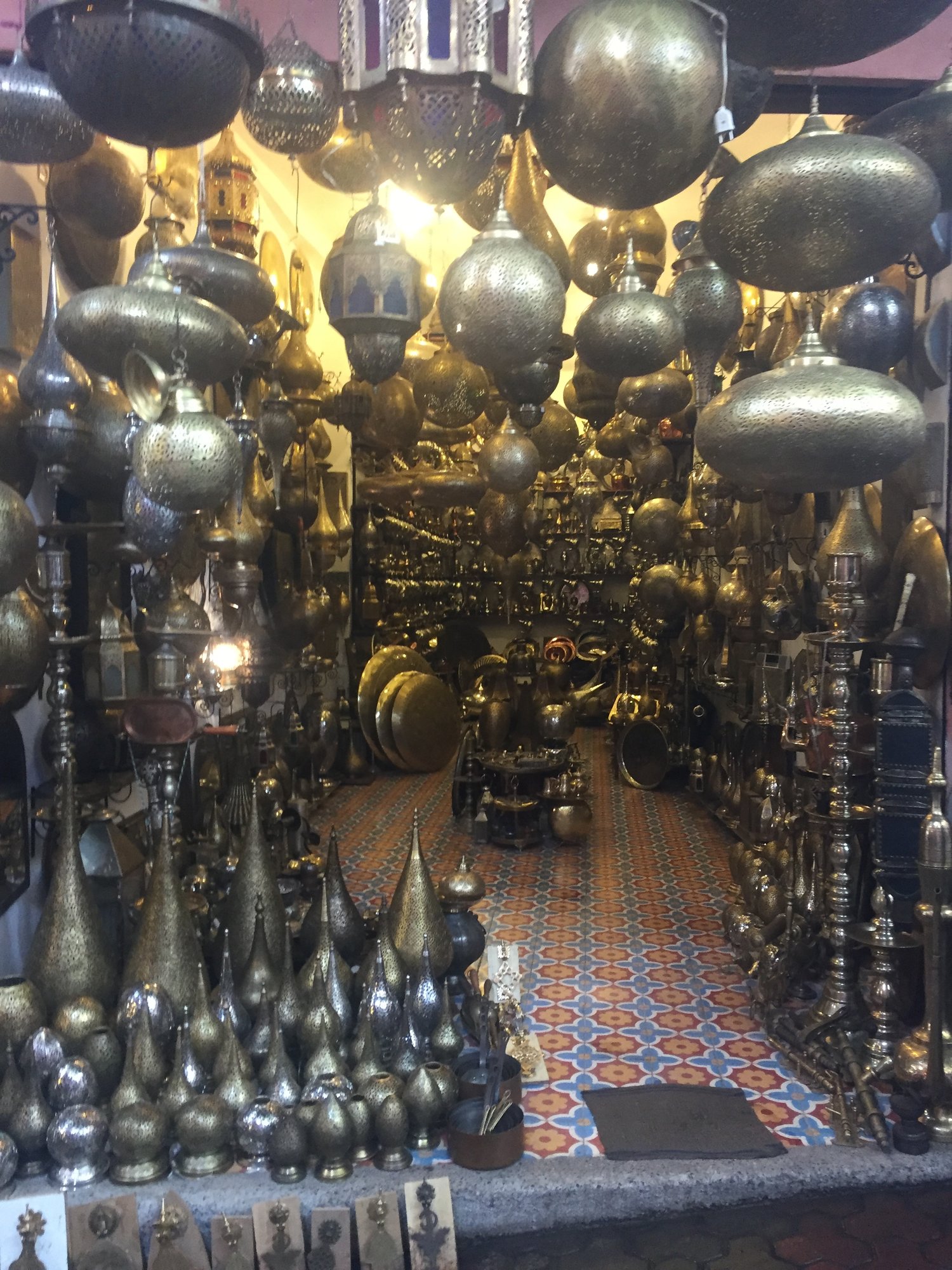 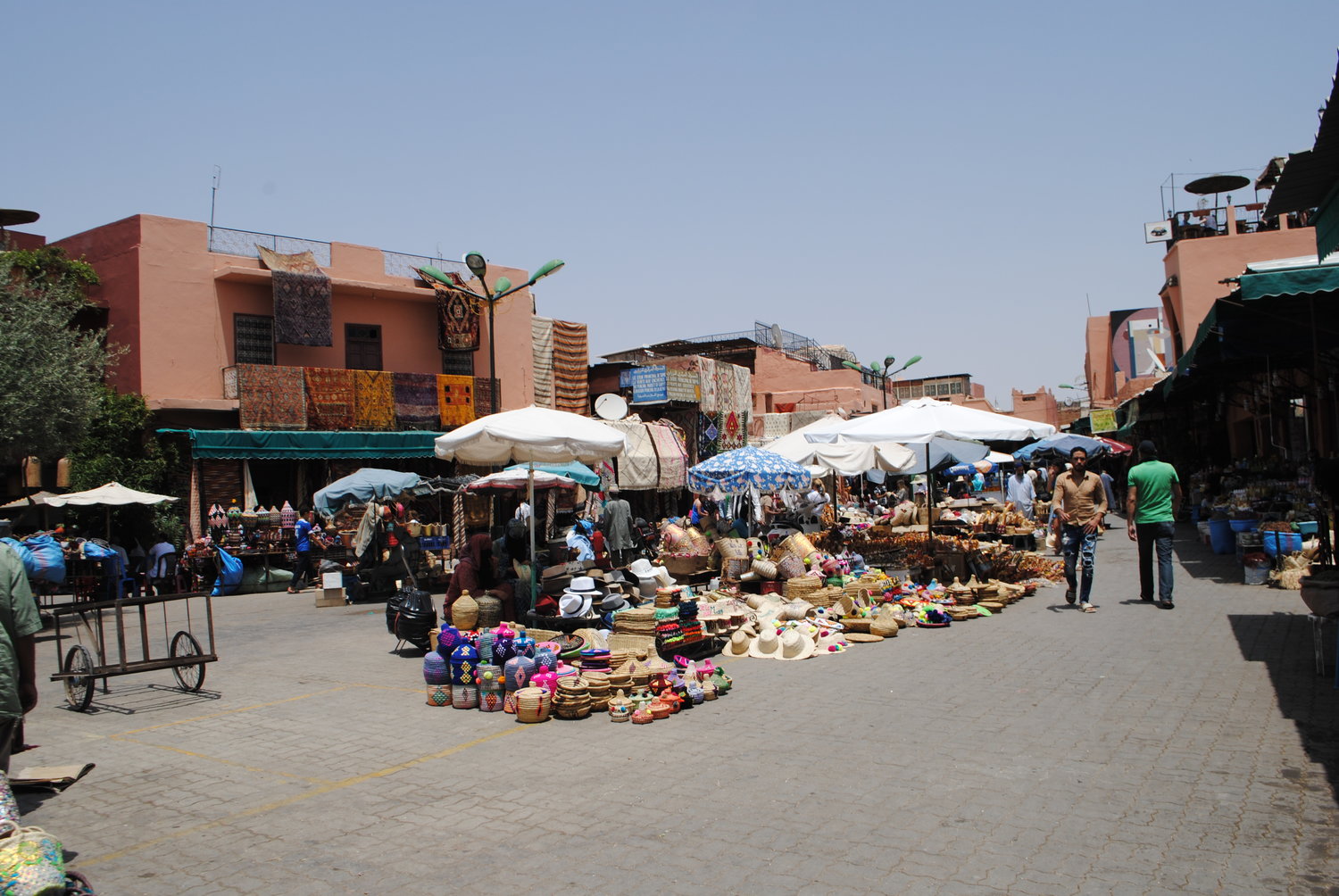 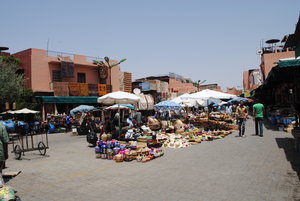 After we got lost in that maze for a few hours, we headed to the main square where all the snake charmers, monkeys and dancers were.  We saw the Koutoubia Mosque which was the tallest Mosque in Marrakesh and then booked it to lunch.  We kept hearing about the Nomad which wasn't the easiest to find (as we quickly realized nothing is in Morocco) but once we did it was well worth it.  We went all the way up to the rooftop and were the only ones up there overlooking the spice markets. While we were there we finally heard the infamous prayer that they do once (twice? three times?) a day over loud speakers for everyone to hear.

After we were pleasantly full and had some H20 in us we went back to our Riad where a van was waiting for us to bring us to the desert!! We found this camp called Scarabeo Camp which was about 45 minutes from Marrakesh.  The camp provides a driver to pick you up and you pick your tent size and day time activities ahead of time.  As soon as we got there we were greeted by a sweet yet semi-spacey woman named Mary who grabbed our luggage and showed us to some lounge chairs while we waited for our tent to be prepared.  Morocco is very unique in which everytime you ask for something, or are greeted somewhere, or do basically anything, they go over the top.  For example, she asked us if we wanted anything, we said water, she came back with water, mint tea (which is everywhere, and delicious) and a plate of mini desserts.  This happened to us again later in the afternoon when we asked for wine glasses (it's BYO!) and the gentleman came back with two glasses, a jug of water and multiple dishes of nuts and prunes. You really start to get used to it and it's amazing.

Lets take a moment to talk about the bathrooms in the tent.  It's connected by a tent flap, and the toilet looks like one of those you used when potty training.  After you "go" you then pull a drawer out from the bottom of it where the water falls into somewhere else I don't care to think about.  The sink was the best part.  It was legit just a lantern (sorry, genie lamp) filled with water which you poured over your hands onto a dish.  The shower was a couple of poles holding up sheets with a shower nozzle hanging loose on the side that you have to hold the whole time. Not making this stuff up.

Our one and only activity we decided to do was the camel ride (duh).  About an hour before our ride was scheduled and we were laying in our tent trying to nap, we could hear the camels (or actually it was just one camel) yelling out into the desert for about 20 minutes.  It sounded like chewbacca using an Auto-tune.  Needless to say we did not nap, but I was too excited to get on that damn camel hump I didn't care. Not much to say about the camel ride besides it being a complete and utter surreal experience.  They are SO much higher than horses and definitely don't spit like everyone says they do all the time.  There were about 6 of us all tied together with our main man (never got his name) towing us along, speaking in camel.  I highly highly recommend doing this. 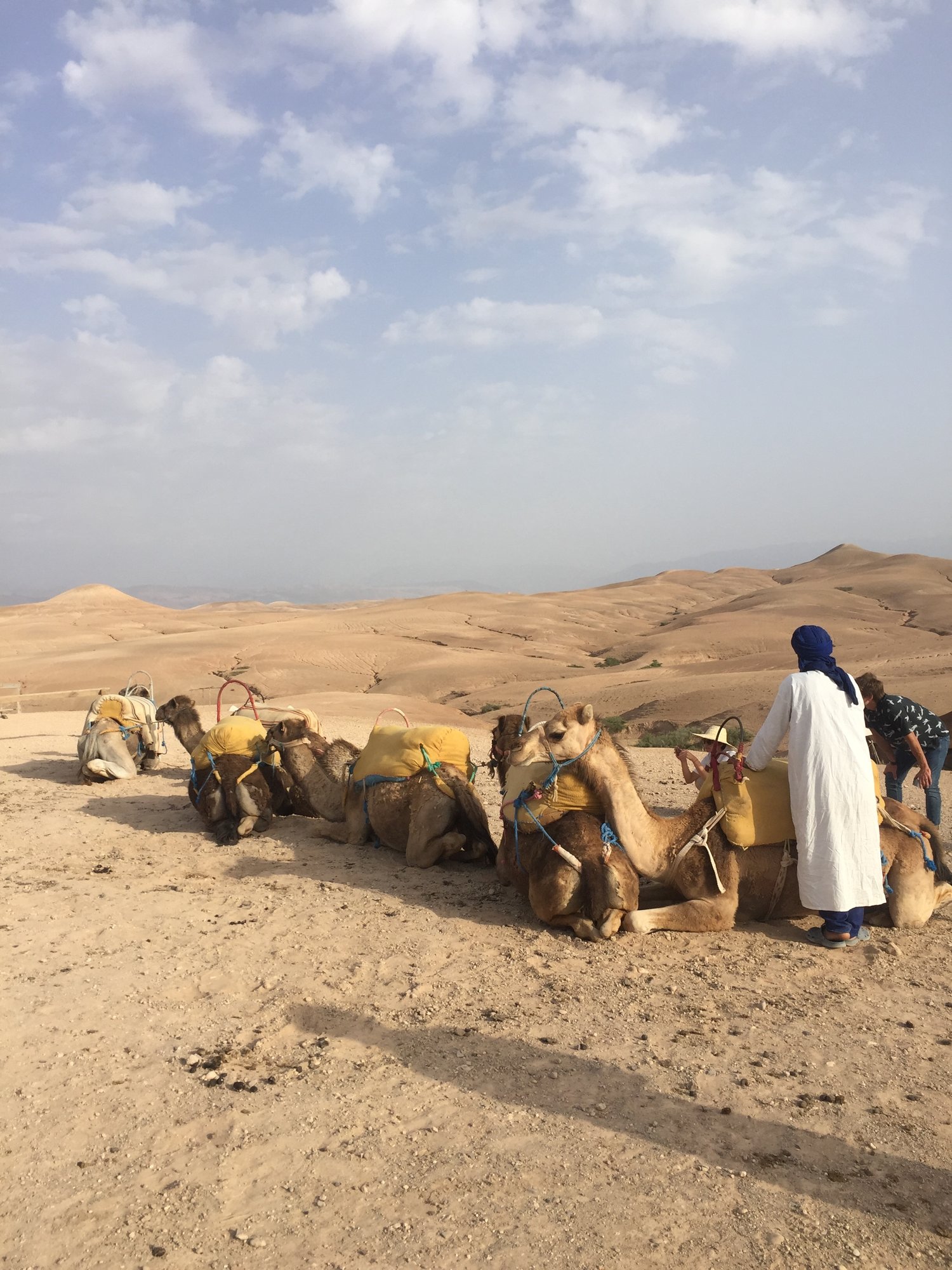 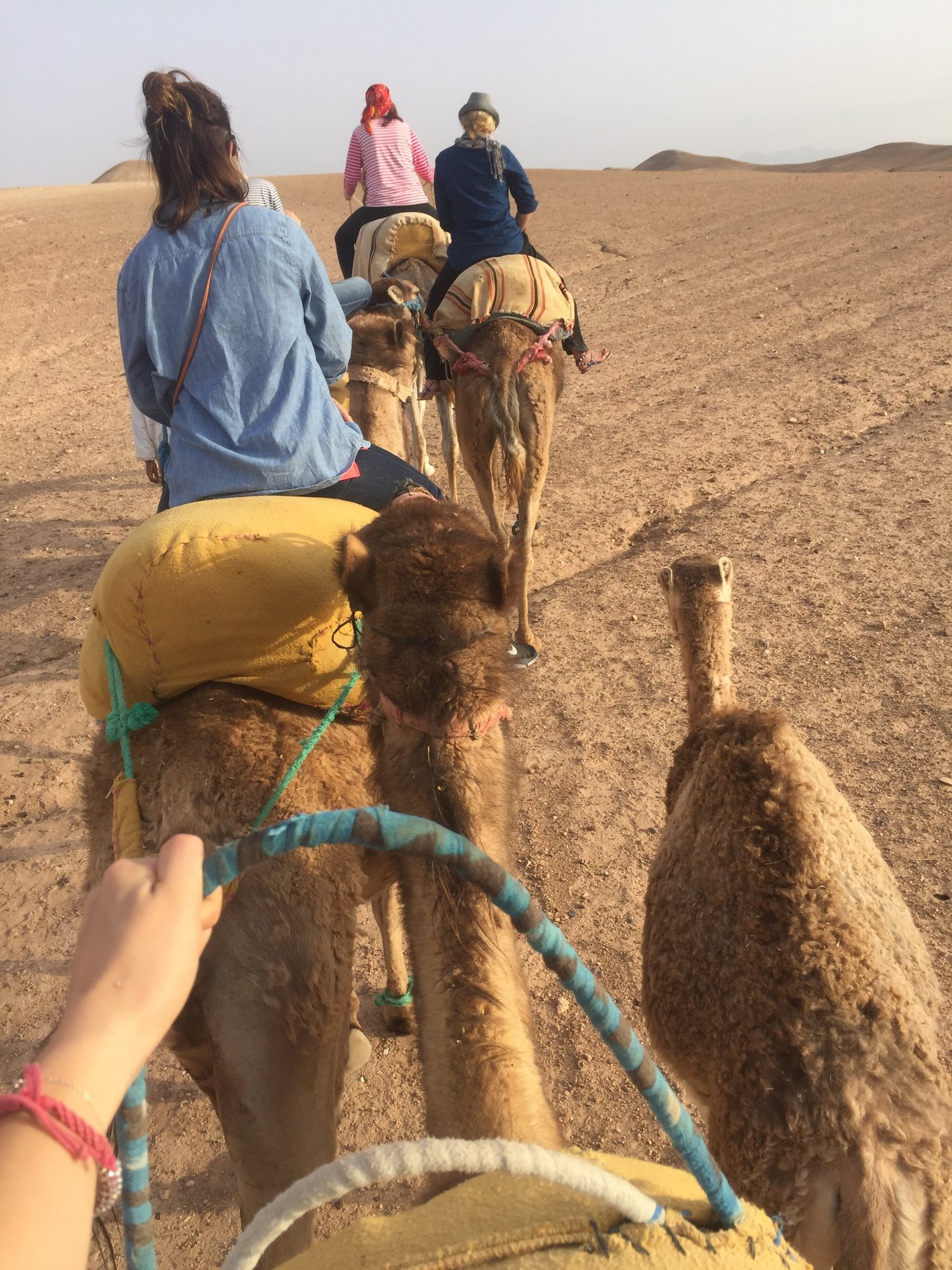 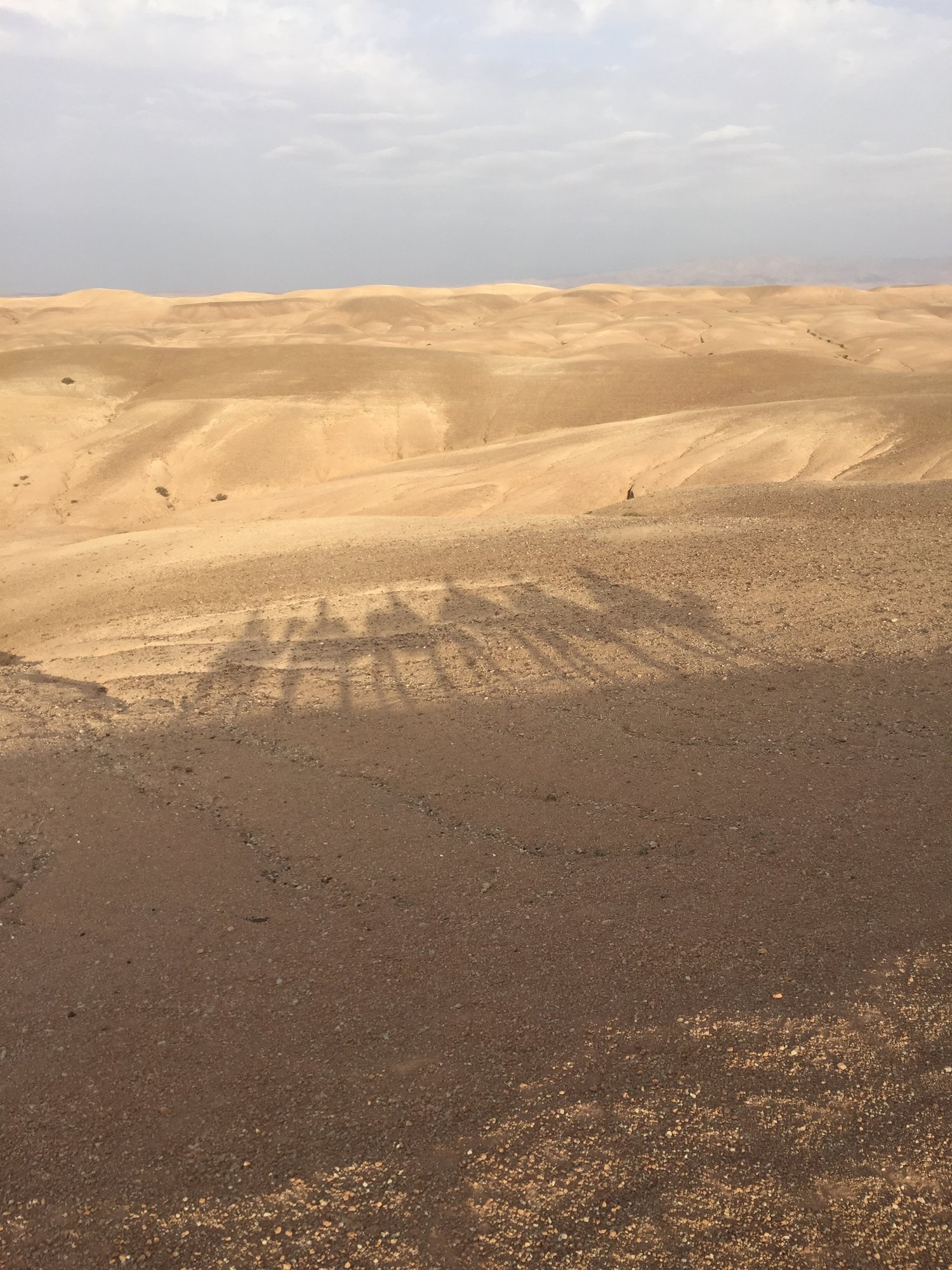 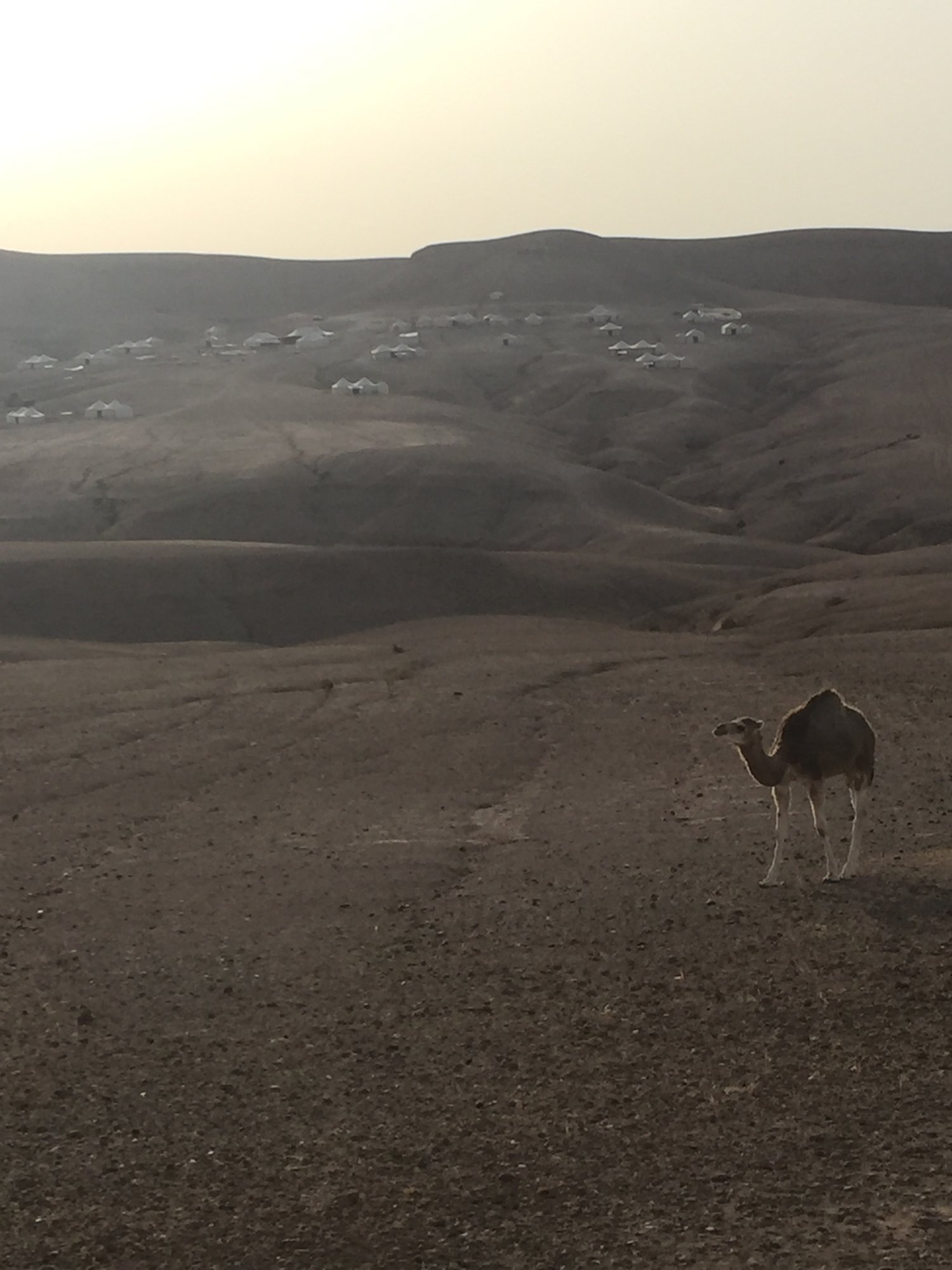 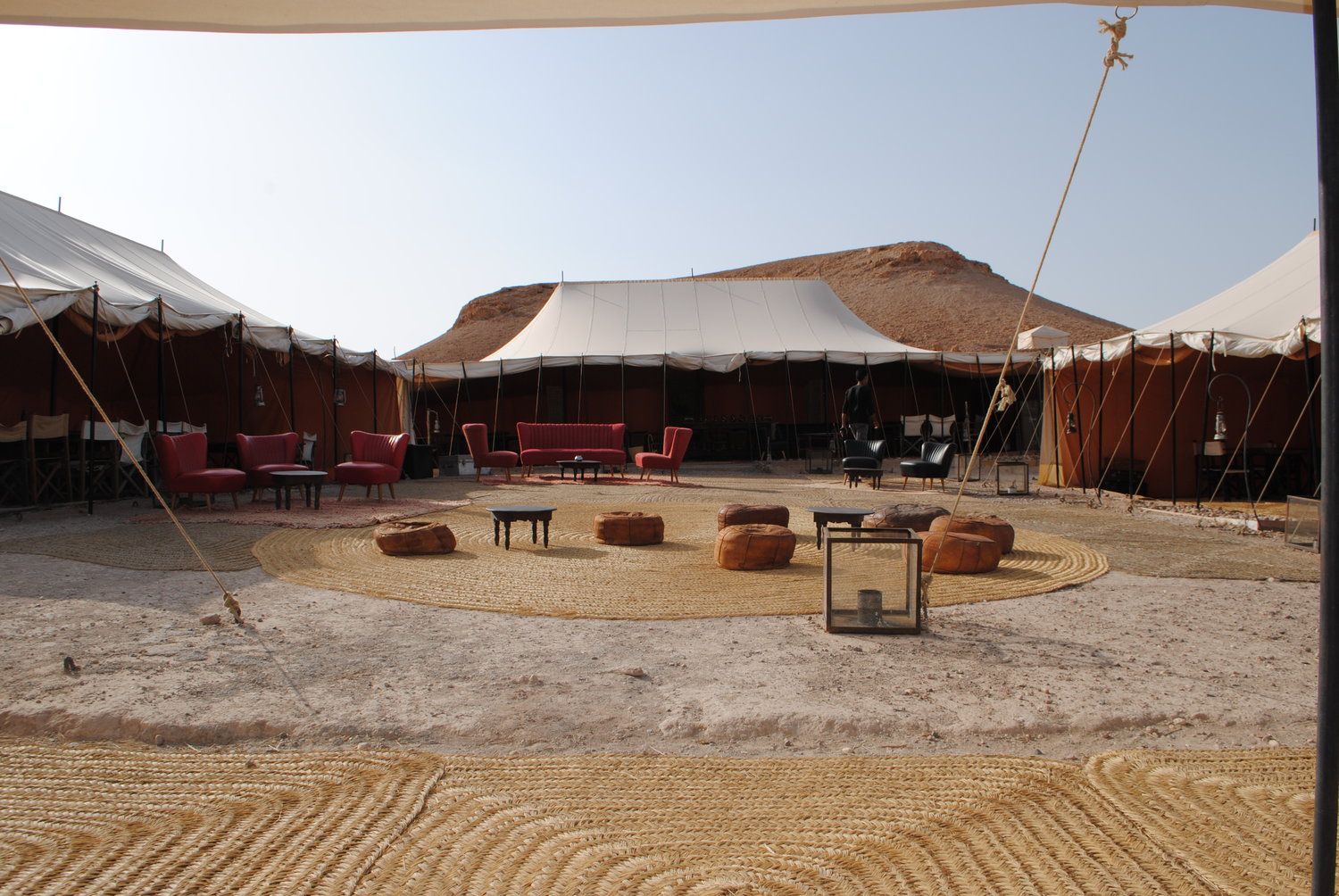 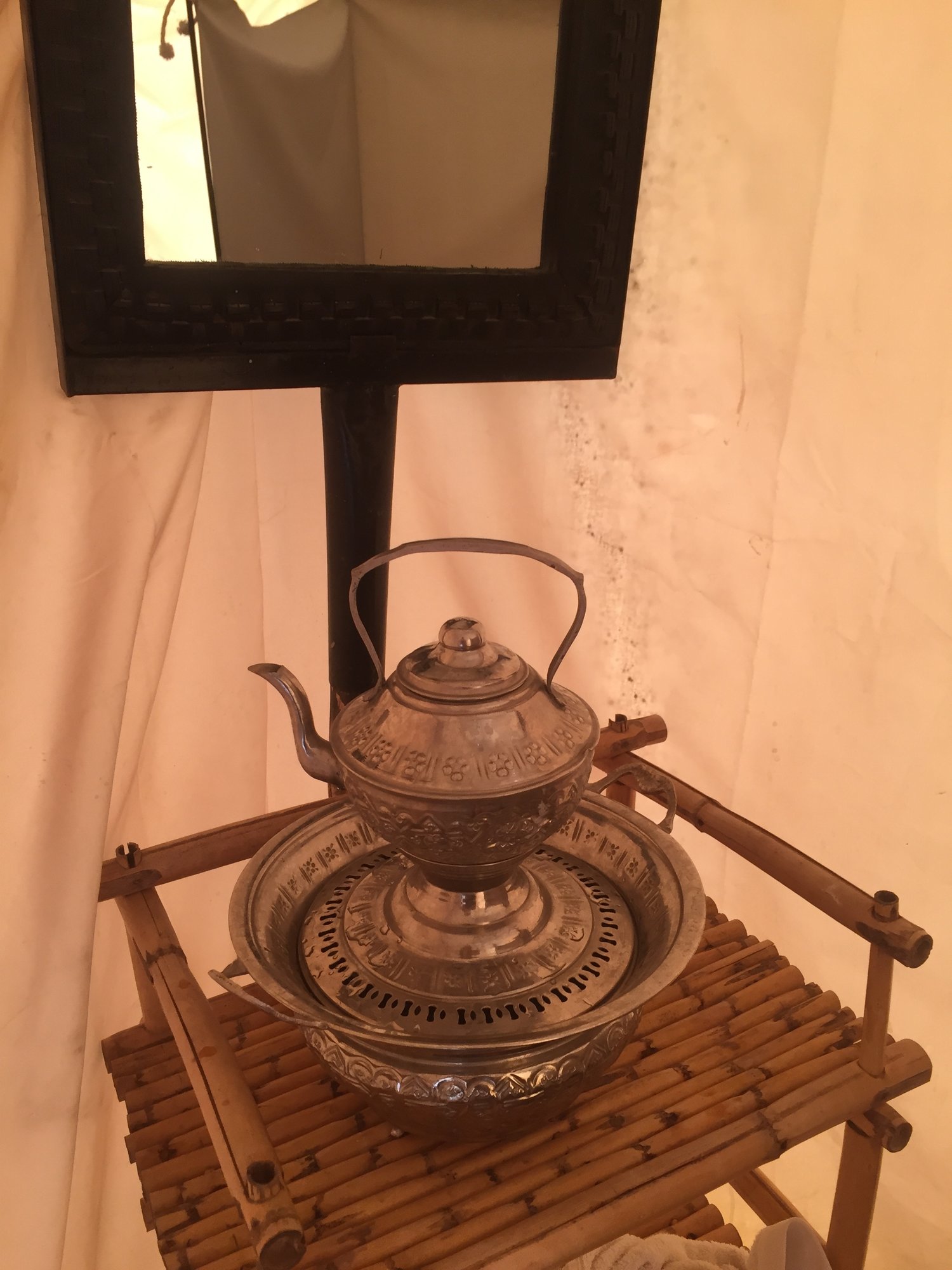 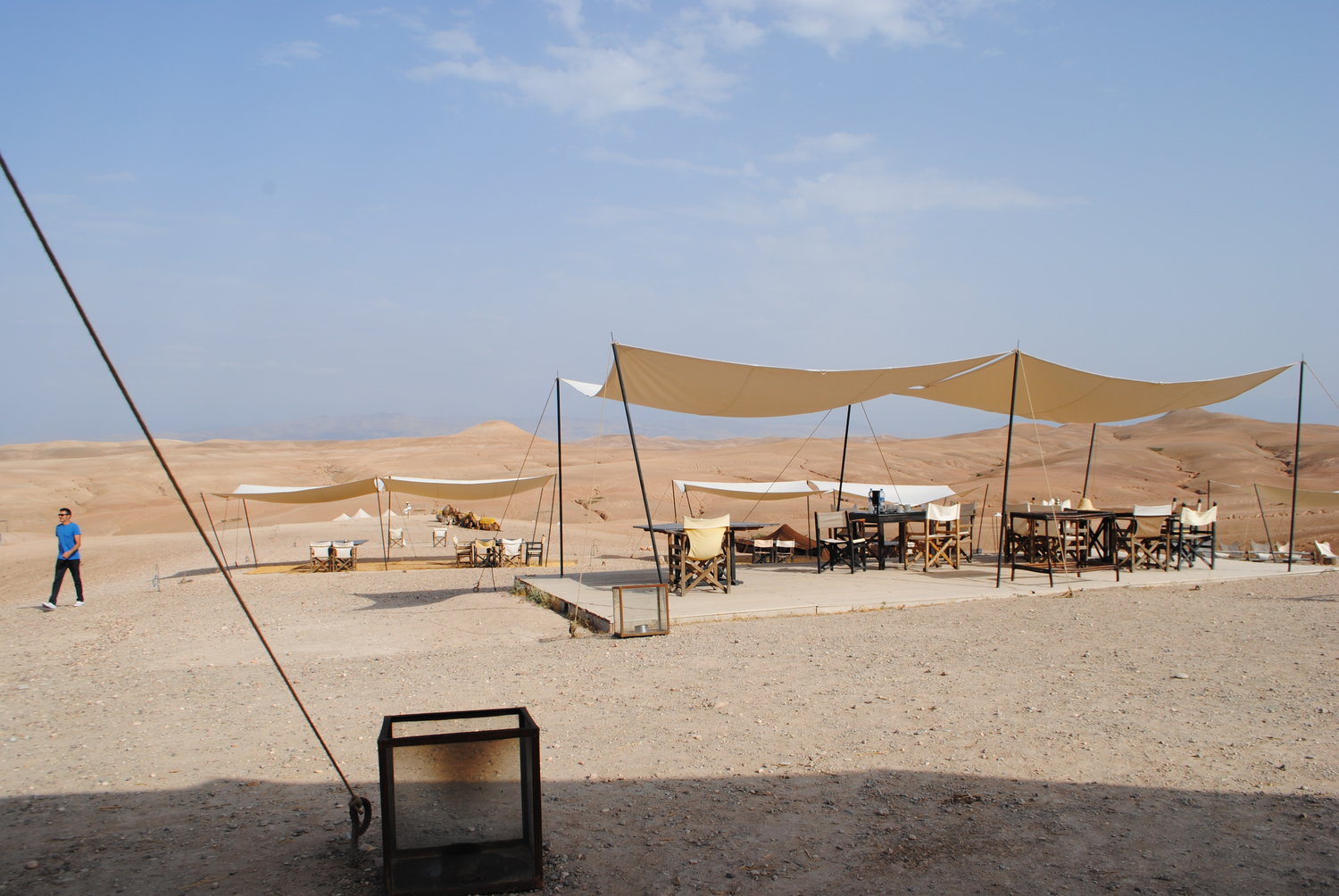 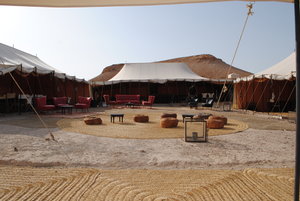 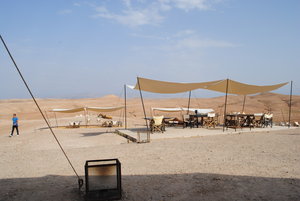 Our dinner was very similar to our breakfast at the Riad.  Walked up to the main tent area and found one table with two chairs side by side perfectly set.  Mary came out of no where (as she does) and told us to have a seat where they continued to bring out tagines upon tagines.  Bellies full and bodies exhausted we crashed out in our tent straight after that.

The next day we waited for our car to come and pick us up to bring us back to Marrakesh where we were DETERMINED to find a pool.  We kept hearing about this place called El Fenn and after wandering aimlessly for a bit, then finding it, then being told they don't have a pool, then lying and saying we're having lunch, then them changing their mind and telling us they do have a pool, we walked right in.

We had one of those moments again where we ordered two beers and they came out with two beers, two pool towels, a giant plate of assorted nuts, and a platter of freshly sliced fruit.

After cooling off with some fake swans we decided to go to lunch at Dar Moha which was apparently an old mans mansion that they turned into a restaurant.  To say it was beautiful was an understatement.  Not only was there a swimming pool surrounded by blue walls and giant lush trees but they even had a tiny turtle crawling around for "decoration".  Seriously epic meal, another strong recommendation. 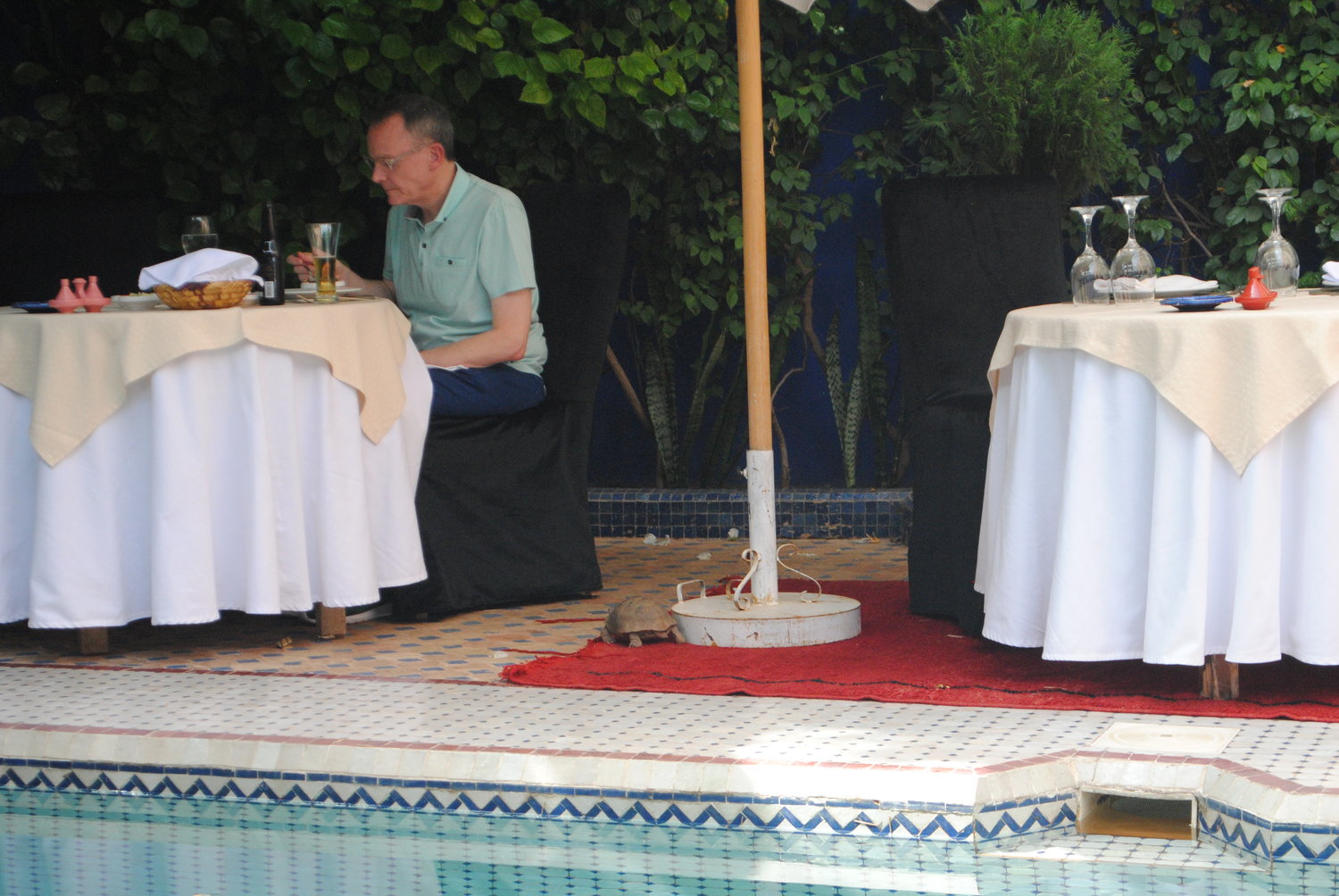 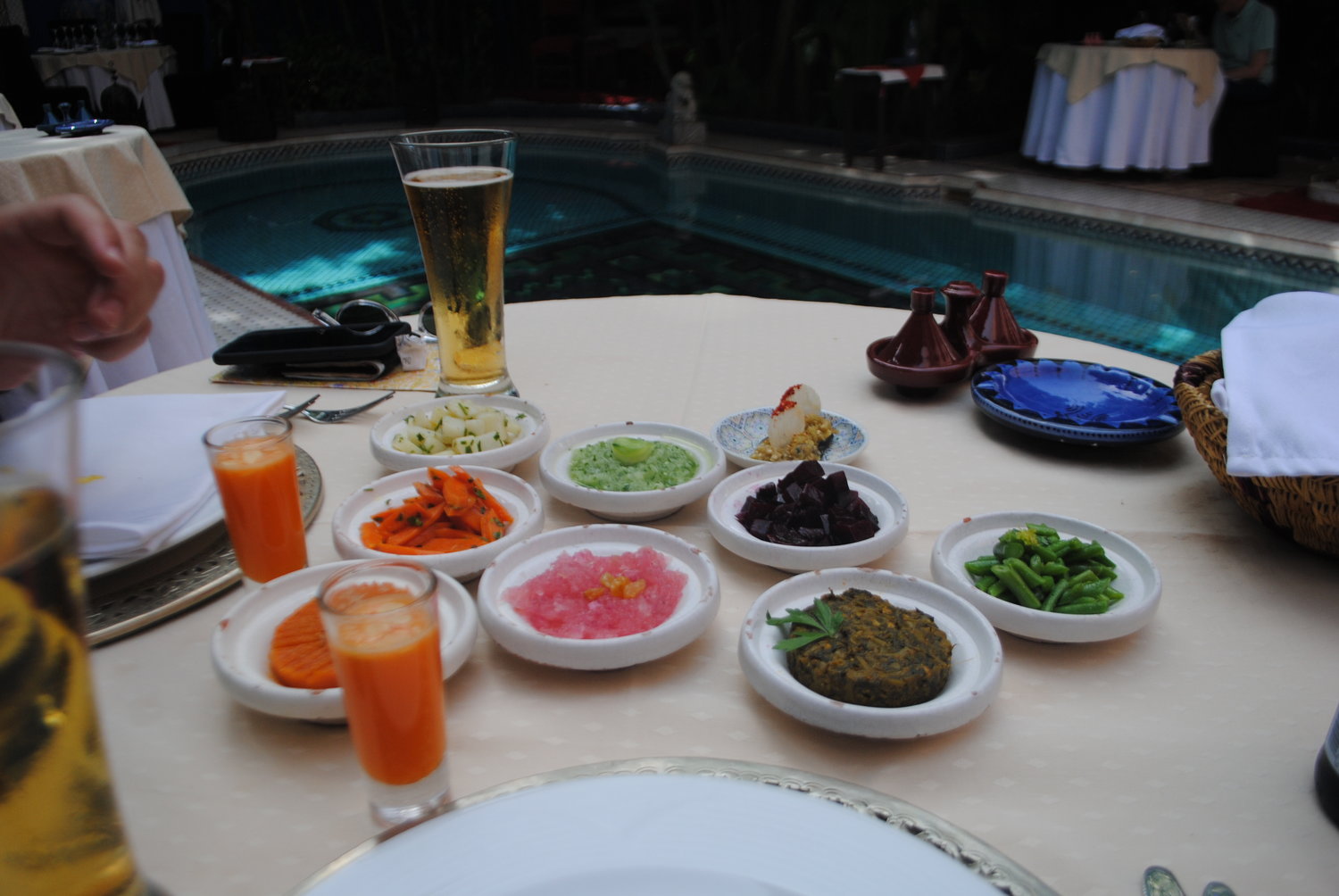 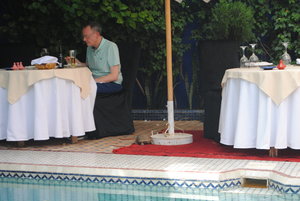 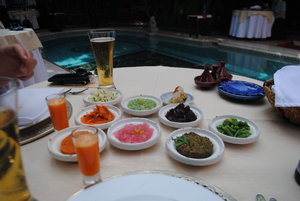 After battling through the Souks one last time we headed back to our salvation and showered up before heading to dinner.  I have to say, I'm a big meat lover, but after having tagines for breakfast lunch and dinner I was craaaving any type of fish.  We found a place not too far from our Riad called Le Jardin that couldn't have satisfied that craving better. We literally climbed through a tiny door and past through a turquoise hallway filled with hanging mirrors to get into the restaurant.  The hostess told us it was very busy and we'd have to wait, so we said fine, sat for about 5 minutes, maybe less, and our table was ready (apparently this is not New York where a wait means 2 hours). 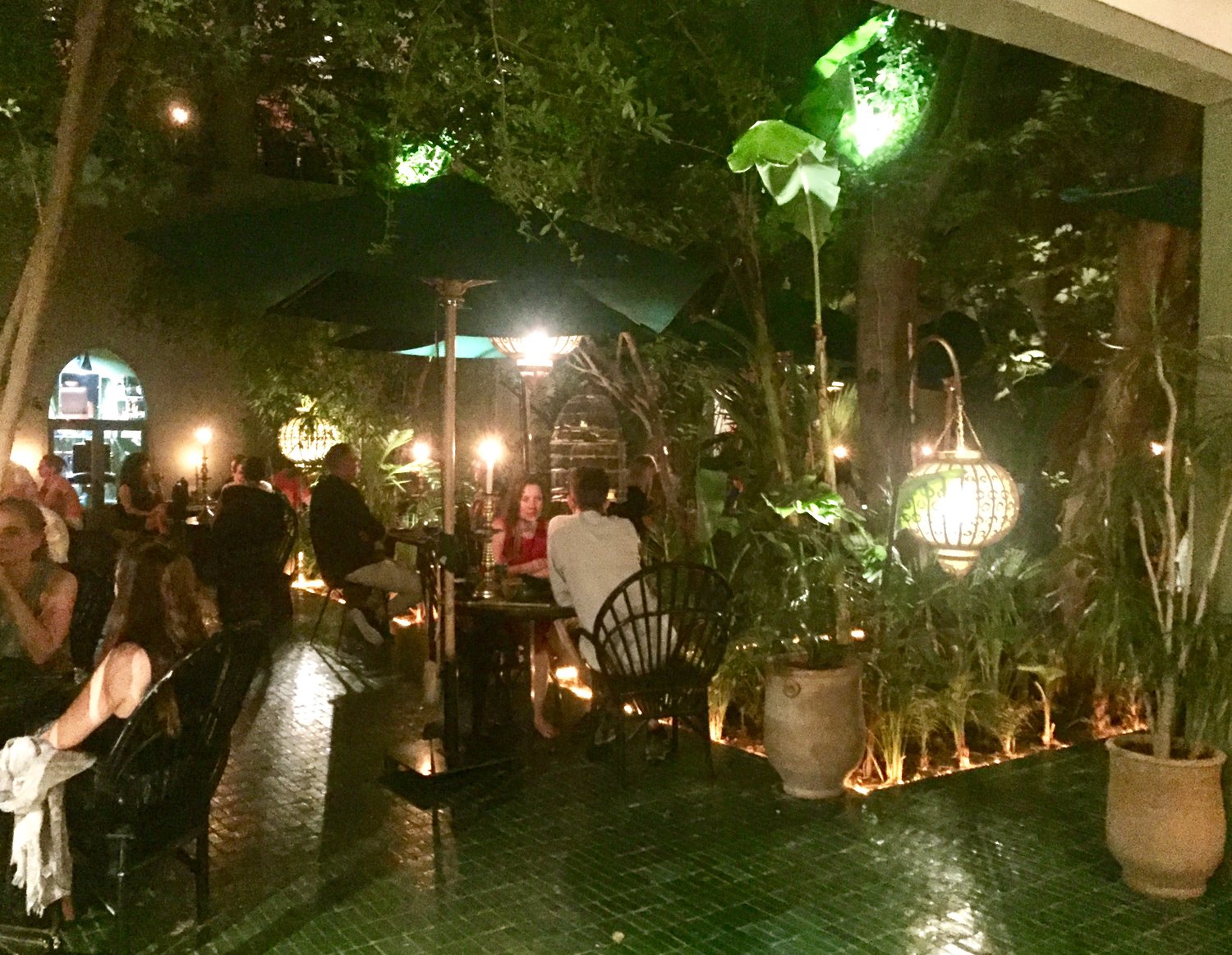 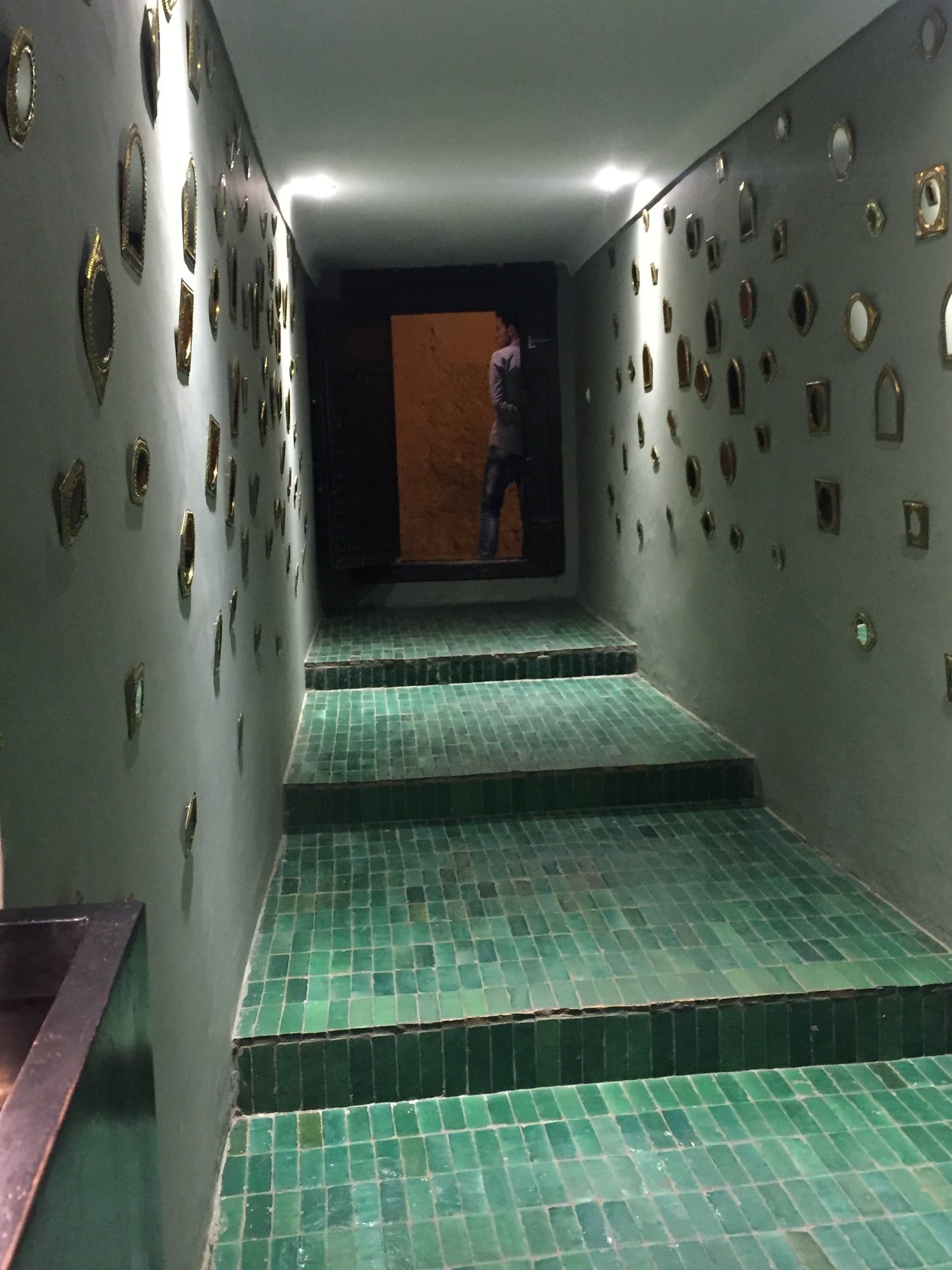 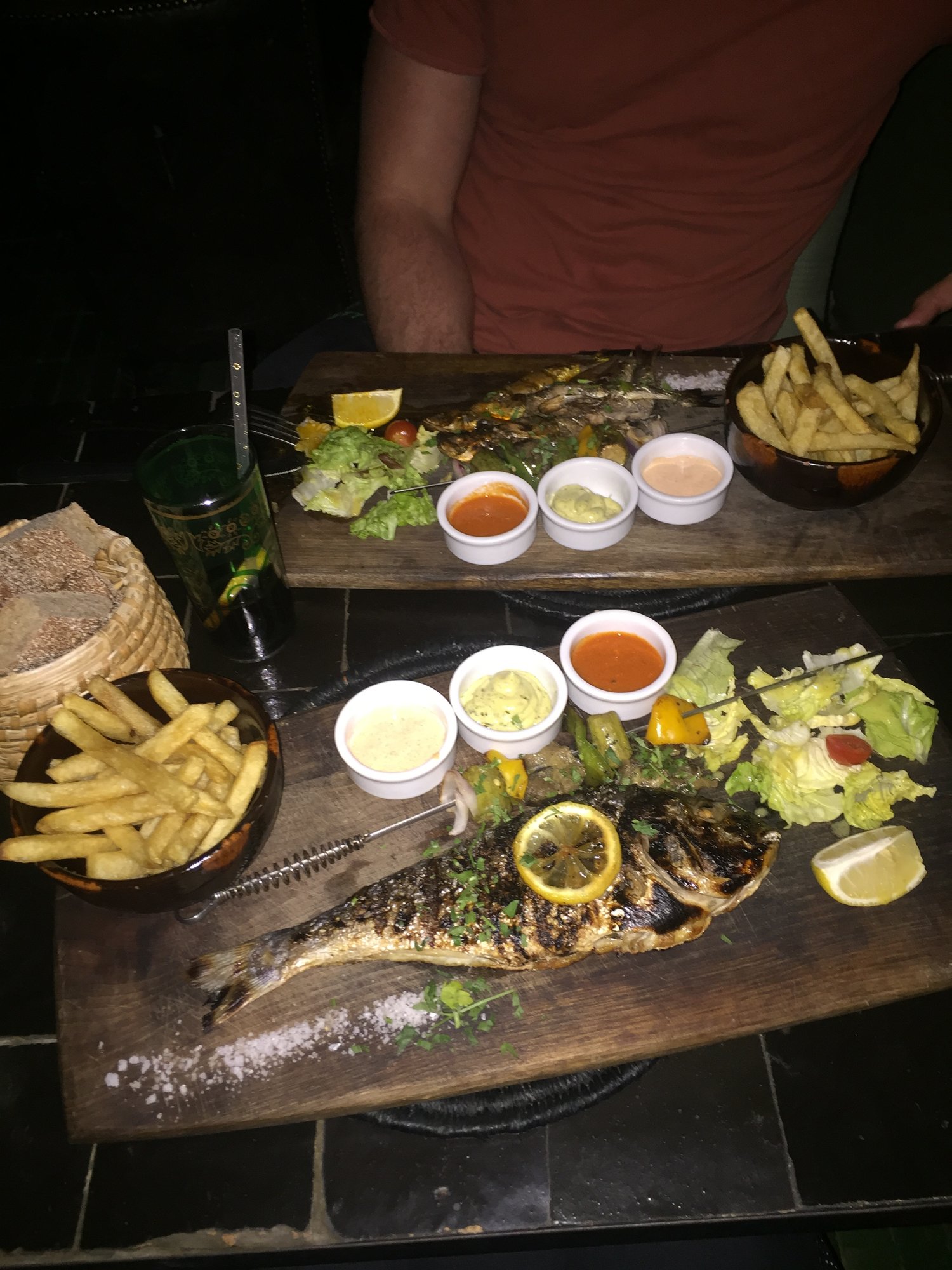 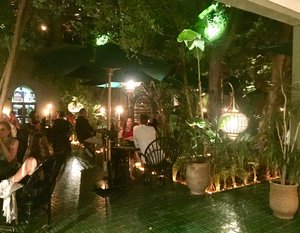 We stumbled back to our lantern lit Riad, finished our bottle of wine in the courtyard, went to bed and were up before the sun to head to Italy.