It feels a little weird writing a blog post about my mans hometown as if I'm the professional and know all there is to know about it.  BUT, I did go over Christmas and New Years and had THE best time, and was flooded with emails and texts from friends asking for recommendations SO, alas, a blog post.

Maybe we should start with the eventful flight over.  We decided to fly through Seoul instead of the usual NYC->LA-> Sydney.  It just so happened to be a much better priced flight so we thought why not.  We flew out expecting to get to Sydney Christmas Eve morning.  The first leg of the flight was 14 hours, so we figured we stay up the whole flight, and then sleep the next 10 hour flight so that when we get in that Xmas Eve morning we won't be as jet-lagged and as close to on schedule of sleeping as possible. That plan would have been PERFECT, if it went down that way.

Not only did Mike and I get in trouble (as usual) for talking too loud on the plane by a passenger (we we're talking about Bitcoin! C'mon) because everyone was asleep when we were trying to stay awake, but when we finally got to Seoul we saw our flight was delayed cause of fog(?) No biggie, lets get some dumplings and a beer and hang out.  Then we went back to the gate and saw the flight had been delayed AGAIN, but this time, to the FOLLOWING DAY.  That would mean, we would not only have to sleep in Seoul, but we would be spending Christmas Eve here and wouldn't get to Sydney until Christmas Day.  Ugh, fine.  Honestly, we were laid back about the whole thing cause it's not the end of the world to miss Christmas Eve, and we kinda of wanted to see Seoul anyway, so fine, we'll just hang out and see what accomodation they put us in and get out of this friggin airport.  WRONG.  They had no intention of putting us up OR telling us exactly what was going on.  People started crowding around the gate when they saw the hand written sign of the 14 hour delay and the Airline Agents wouldn't say a word.  Thaaaat's when shit started to hit the fan.  People started SCREAMING.  This was all in Korean so Mike and I just kind of sat back and watched it all go down, but the Korean locals started going nuts.  Grabbing managers and forcing them behind the desk, screaming crowds, at one point a circle was formed around a manager and everyone had their cellphones out as a man pushed and screamed at him.  The worst part of it all is they rescheduled the flight to land in Sydney during Sydneys airport curfew which is between11pm and 6am (no planes can fly in or out during that time because it's in a residential area).  All the Australians on the plane were freaking out because clearly this airline didn't know that.  Because of that, we got one more notification, this time on our phones, that the flight that was originally delayed to 2pm the next day, is delayed further to 7pm. The crowd. Went. Nuts. At this point we hear that we not only have to leave the airport, but we have to take our baggage with us.

At this point people start to break off.  Some go to the help desk upstairs where the line was about a mile long, some still yelling at the staff, and some (including Mike and I) find a lone flight attendant and latch onto her.  We were basically like, just tell us where to get our suitcases so we can find a hotel and get the hell out of here cause it's already now 3am.  Thankfully as we were waiting for our bags, Mike convinced the flight attendant to lend him her cellphone and was able to call the LAST nearby hotel with an open room.  Not going to lie, felt a little guilty being excited about it when we're surrounded by a group of others from Sydney and London who all knew they were going to not have to sleep in the airport but spend Christmas Eve there.  We grabbed our bags, ran outside, which, mind you, we did not plan on staying in Seoul so we have nothing more than flimsy leather jackets in the middle of winter and of course, the cab line was about 6 blocks long.  WHATEVER, just get us to the damn hotel.  When we finally got a cab and arrived to the hotel. Mike and I literally (no joke) ran to our room cause we were so tired and wanted to get into bed.

That was the most comfortable bed I think I've ever jumped into.  We woke up the next morning and since we did no research on Seoul we had no idea where to go.  We asked the front desk what's a good area for lunch and sightseeing and he point to the main square which just so happened to be a 10 minute walk from our hotel!! Finally, something went right for us.  We grabbed an umbrella (why wouldn't it be raining?) and walked to a street filled with food stations and tons of skin care stores, clothing stores and even the beautiful grounds of an ancient church.  We found a restaurant that we heard about from the front desk, sat down and saw there were only 3 things on the menu, ordered them all and enjoyed some fresh noodles and dumplings.  Walked around some more, happened to find an arcade with archery, virtual realty rides and personal karaoke pods.  Not a bad Christmas Eve at all. 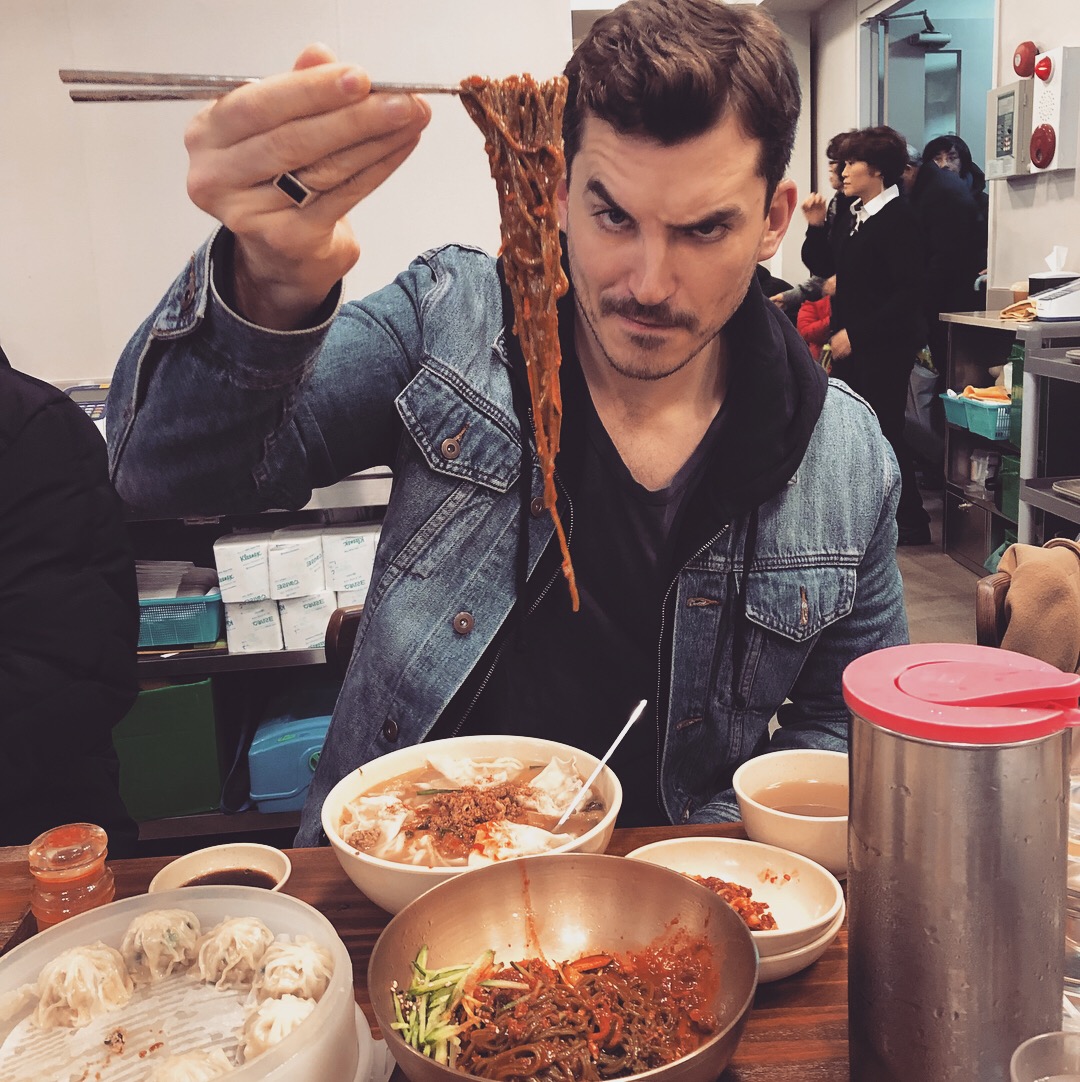 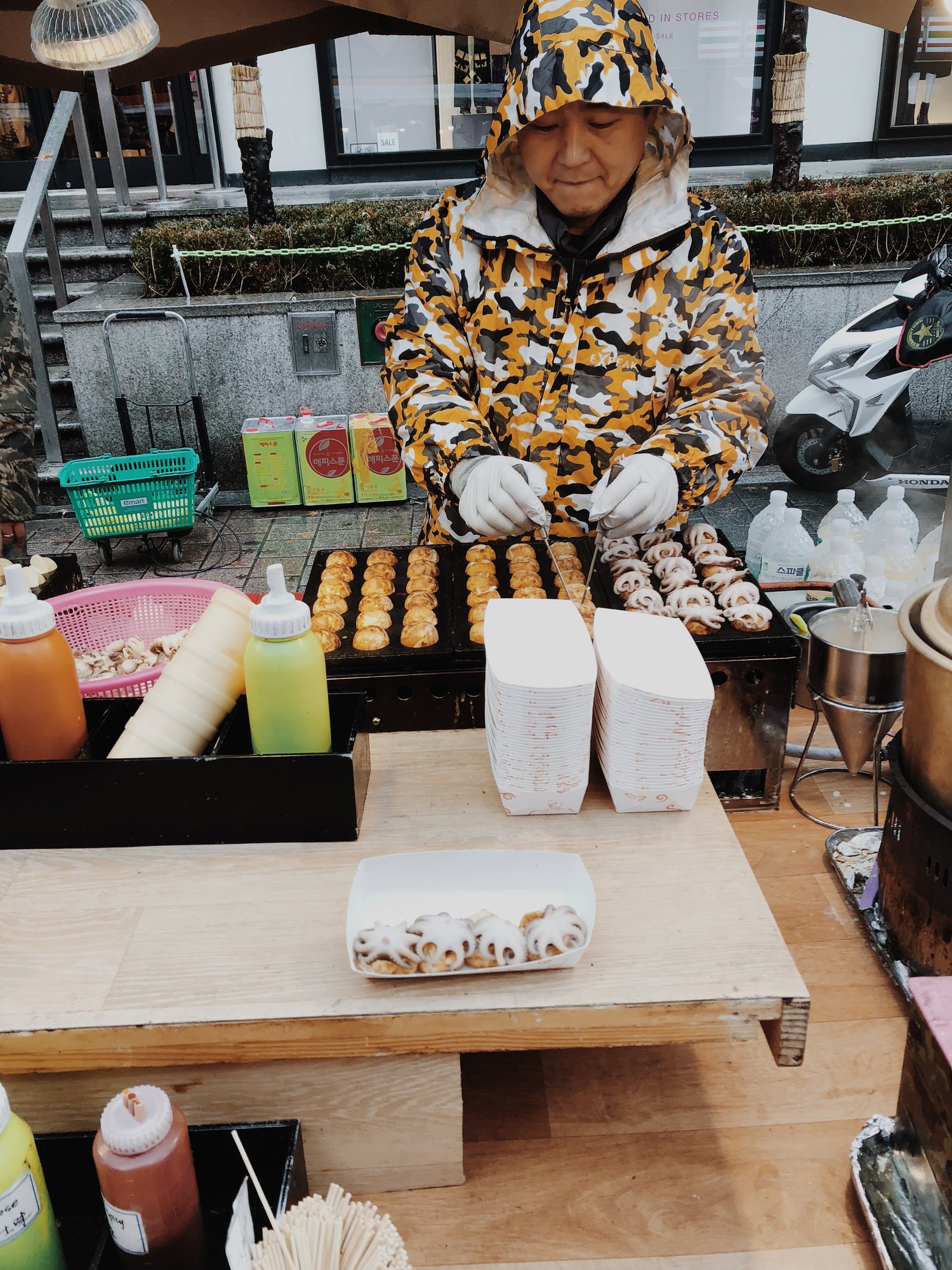 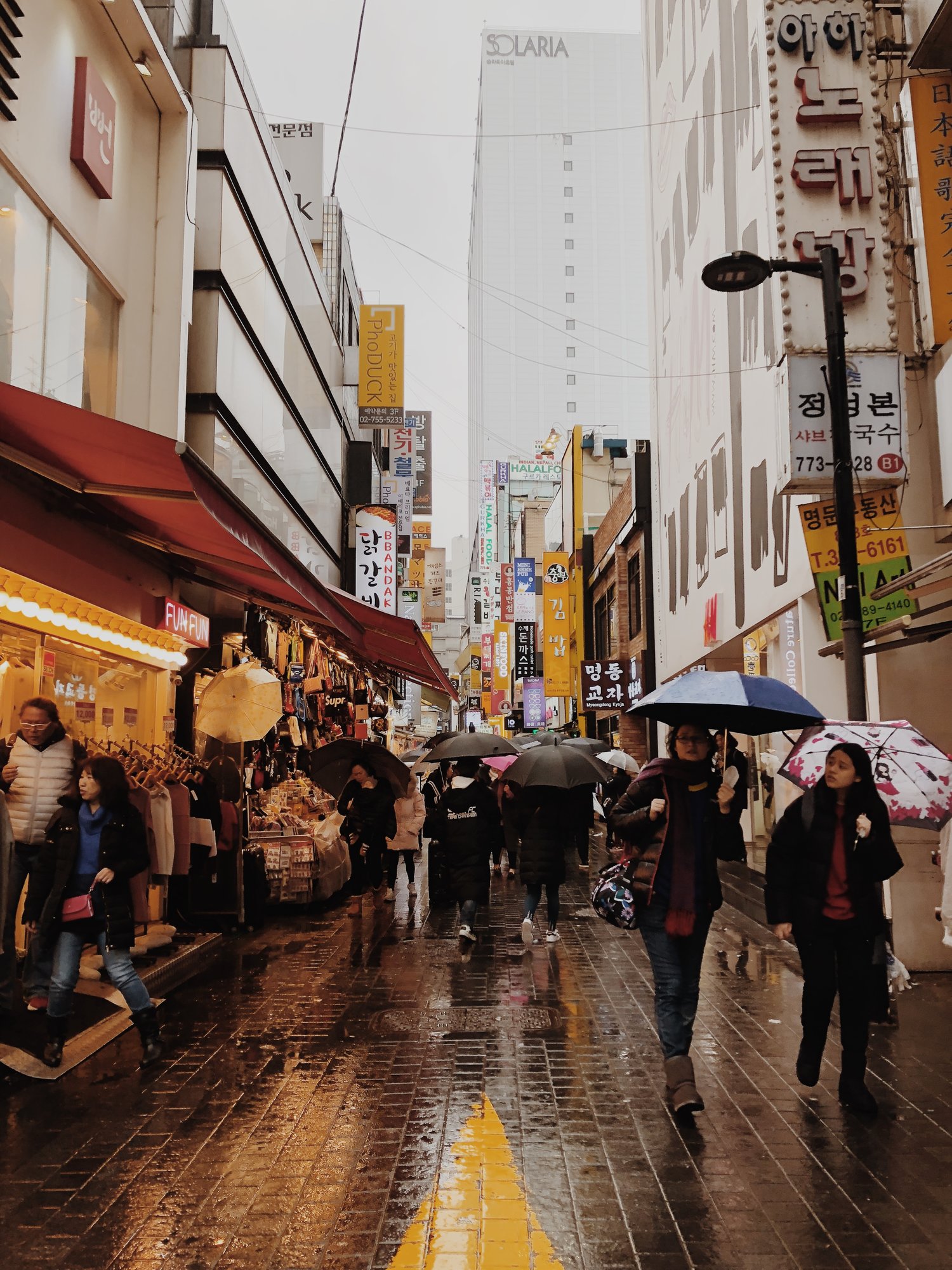 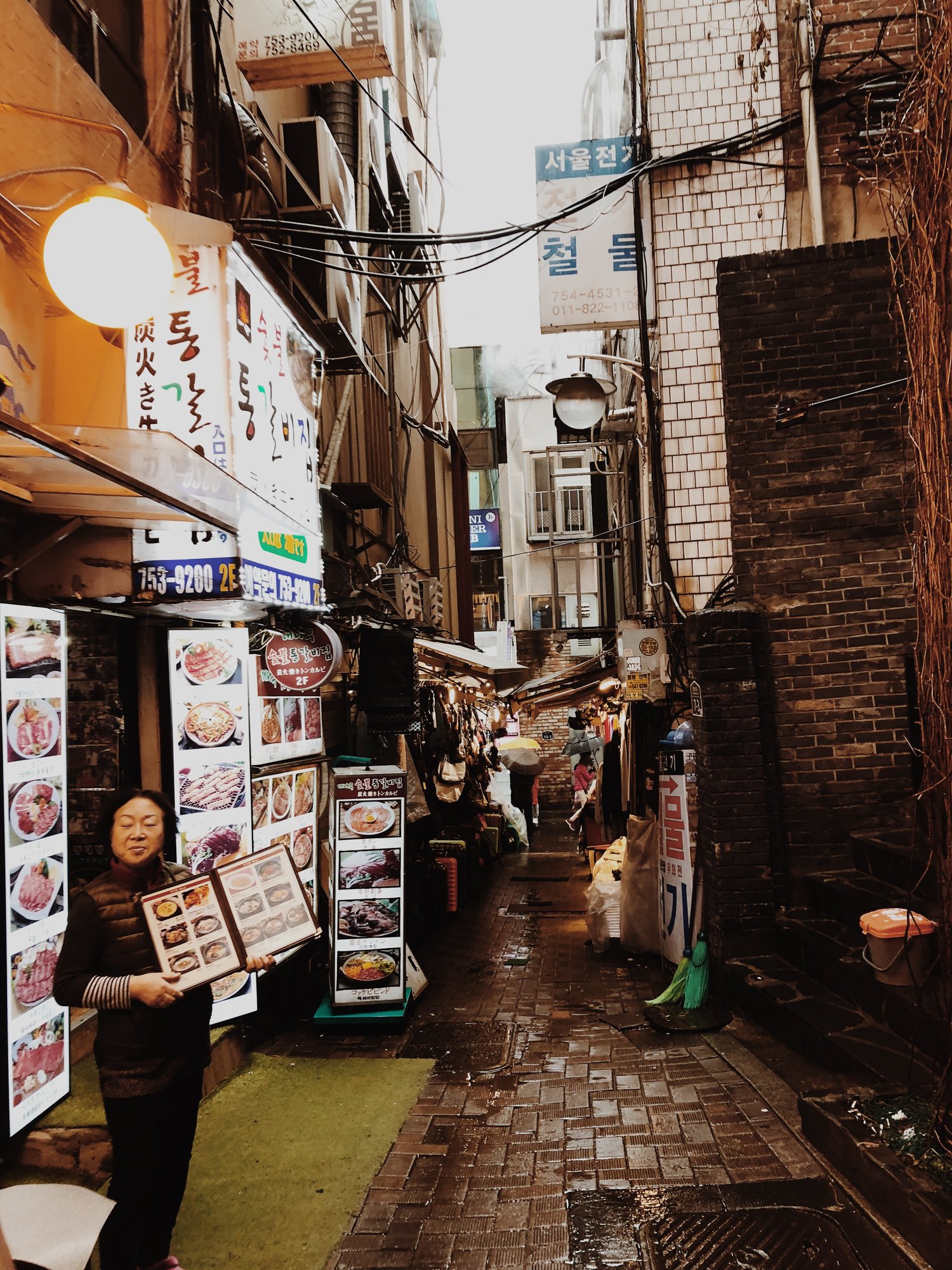 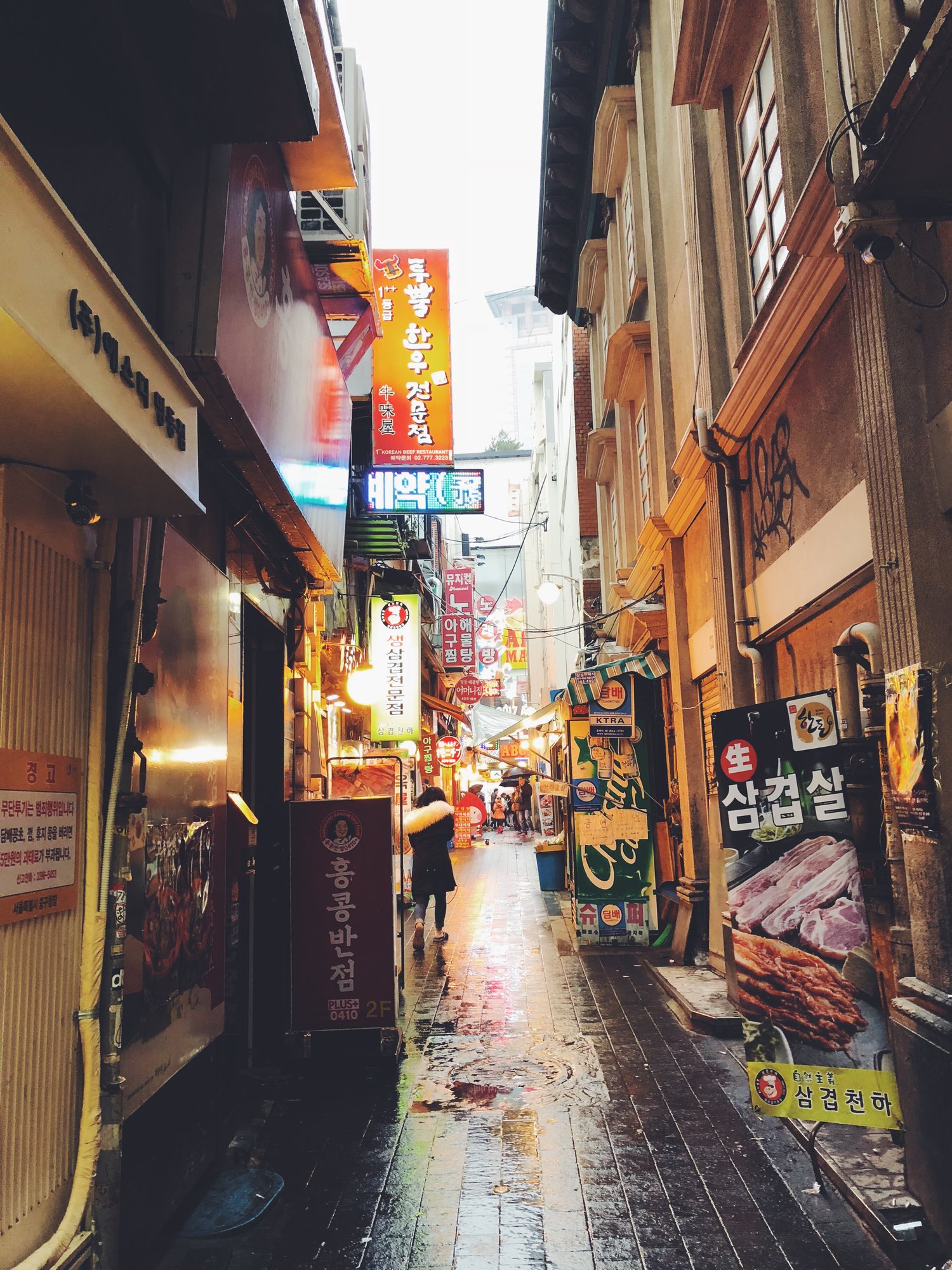 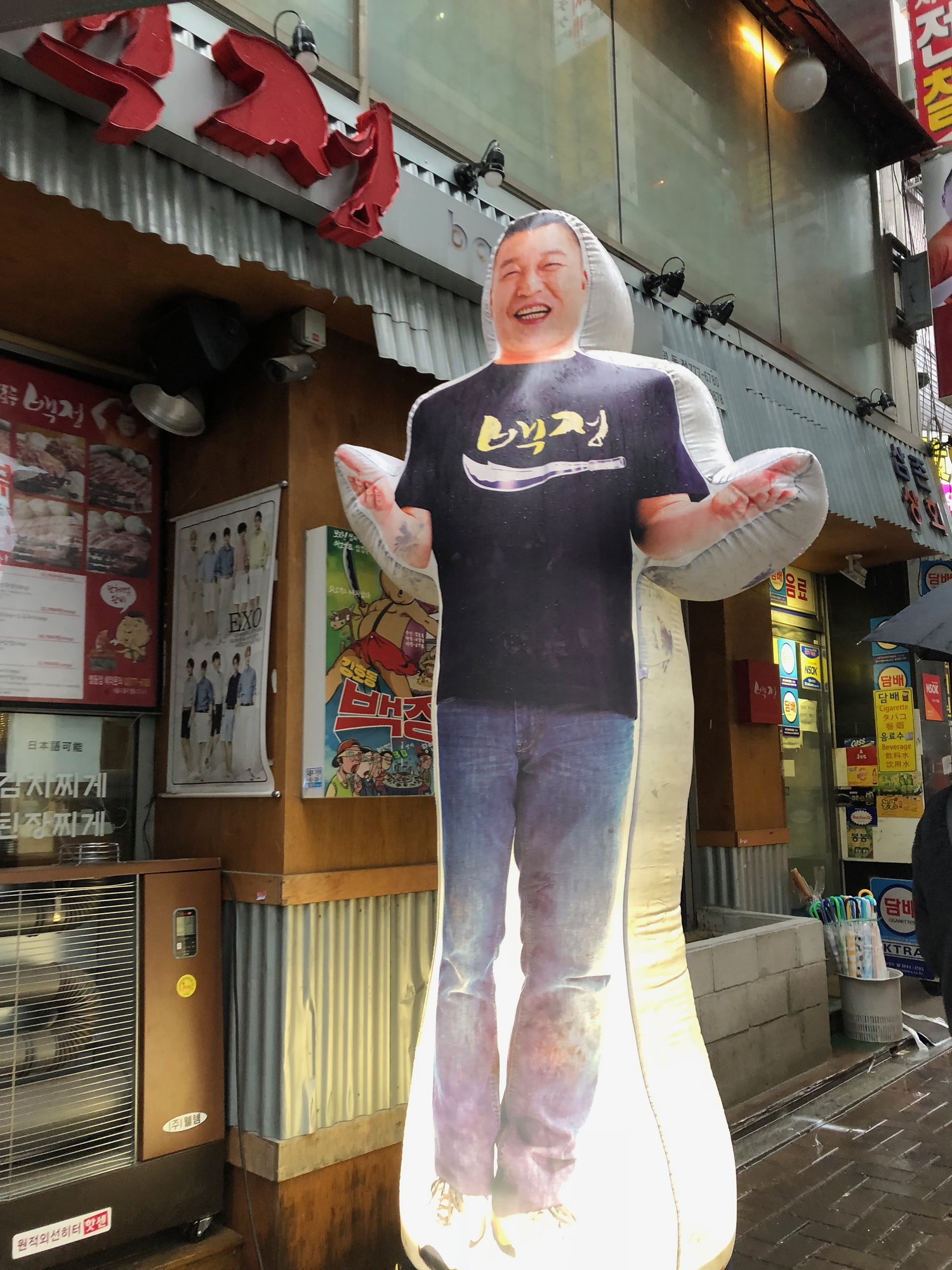 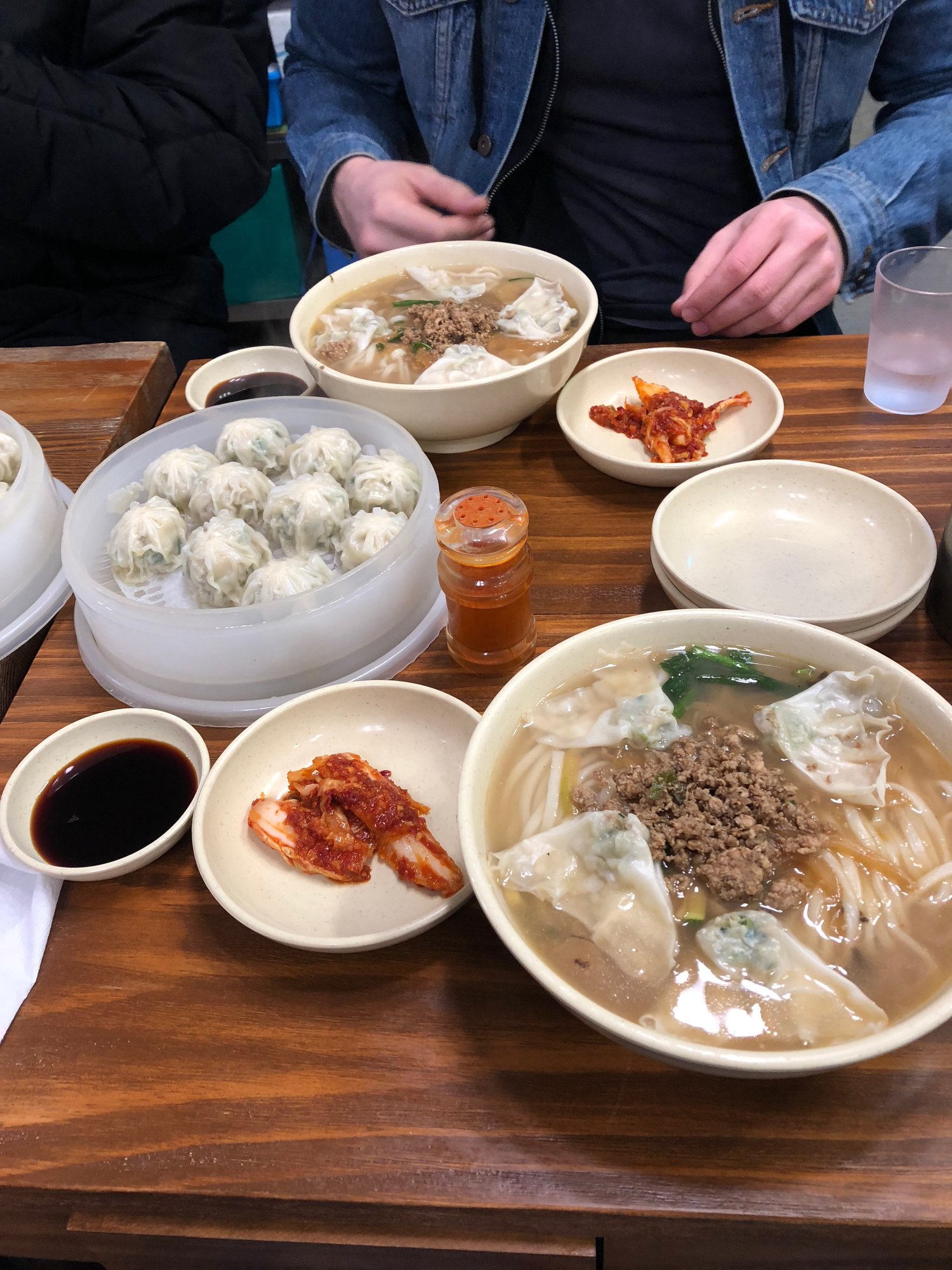 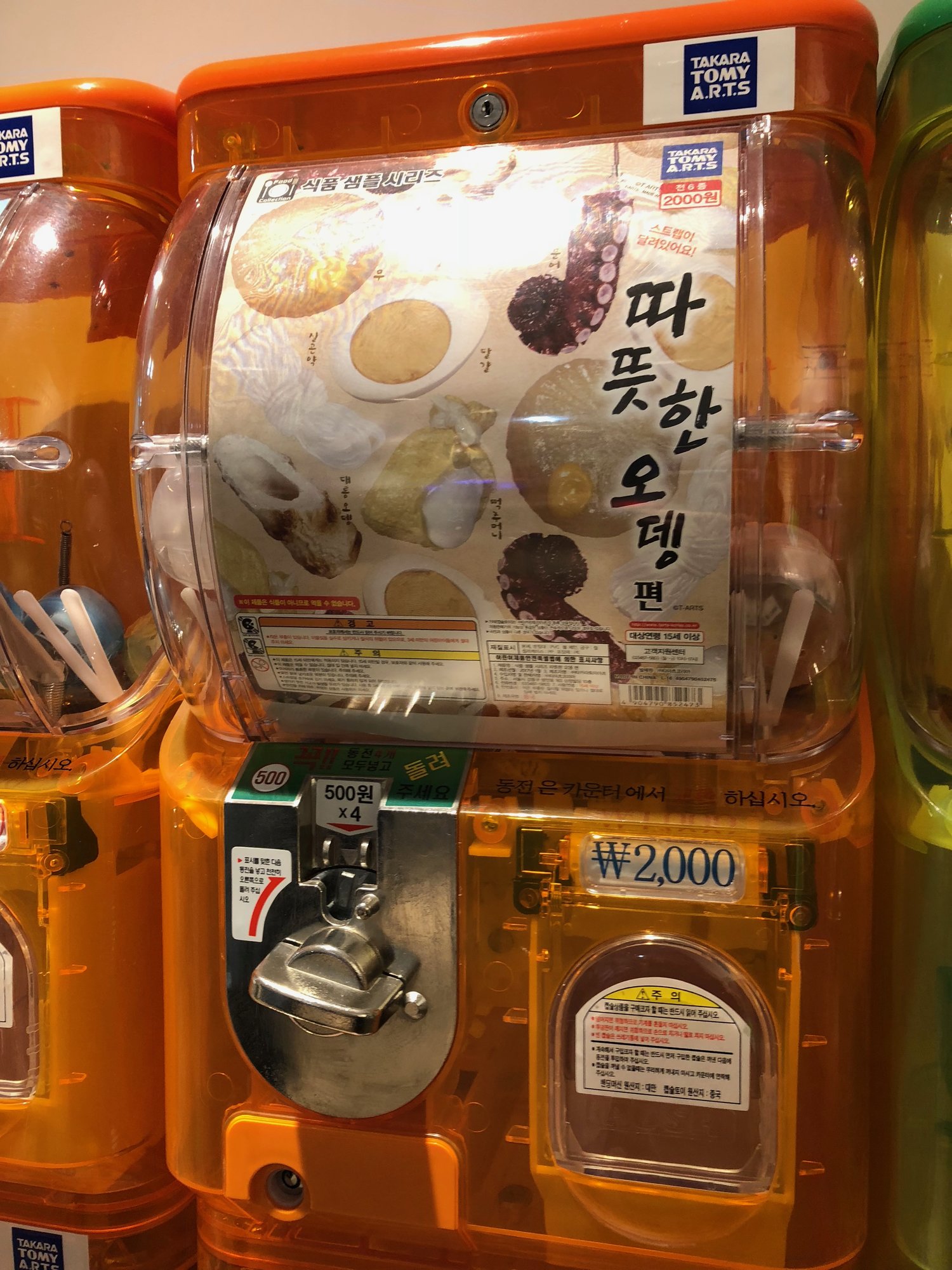 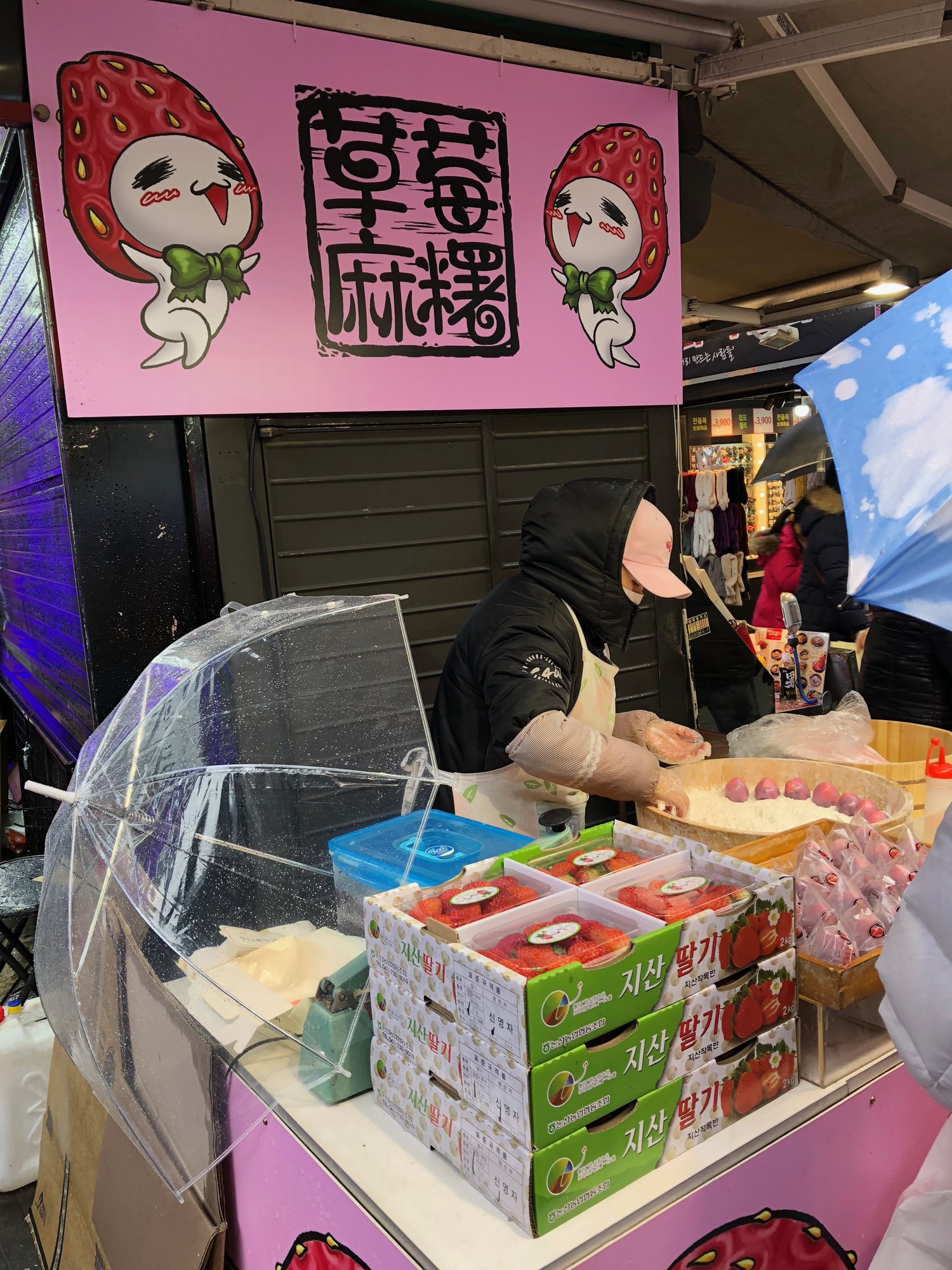 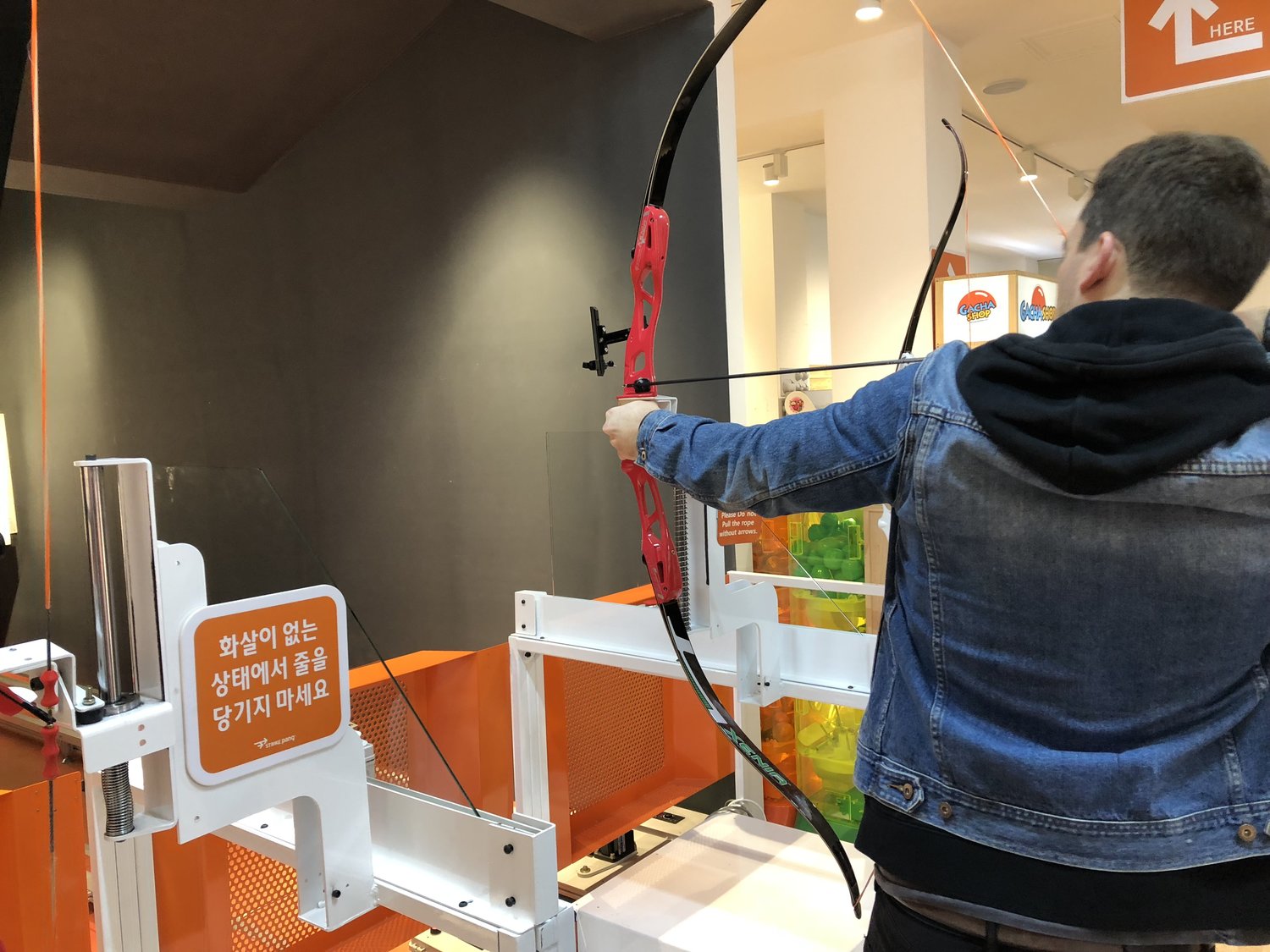 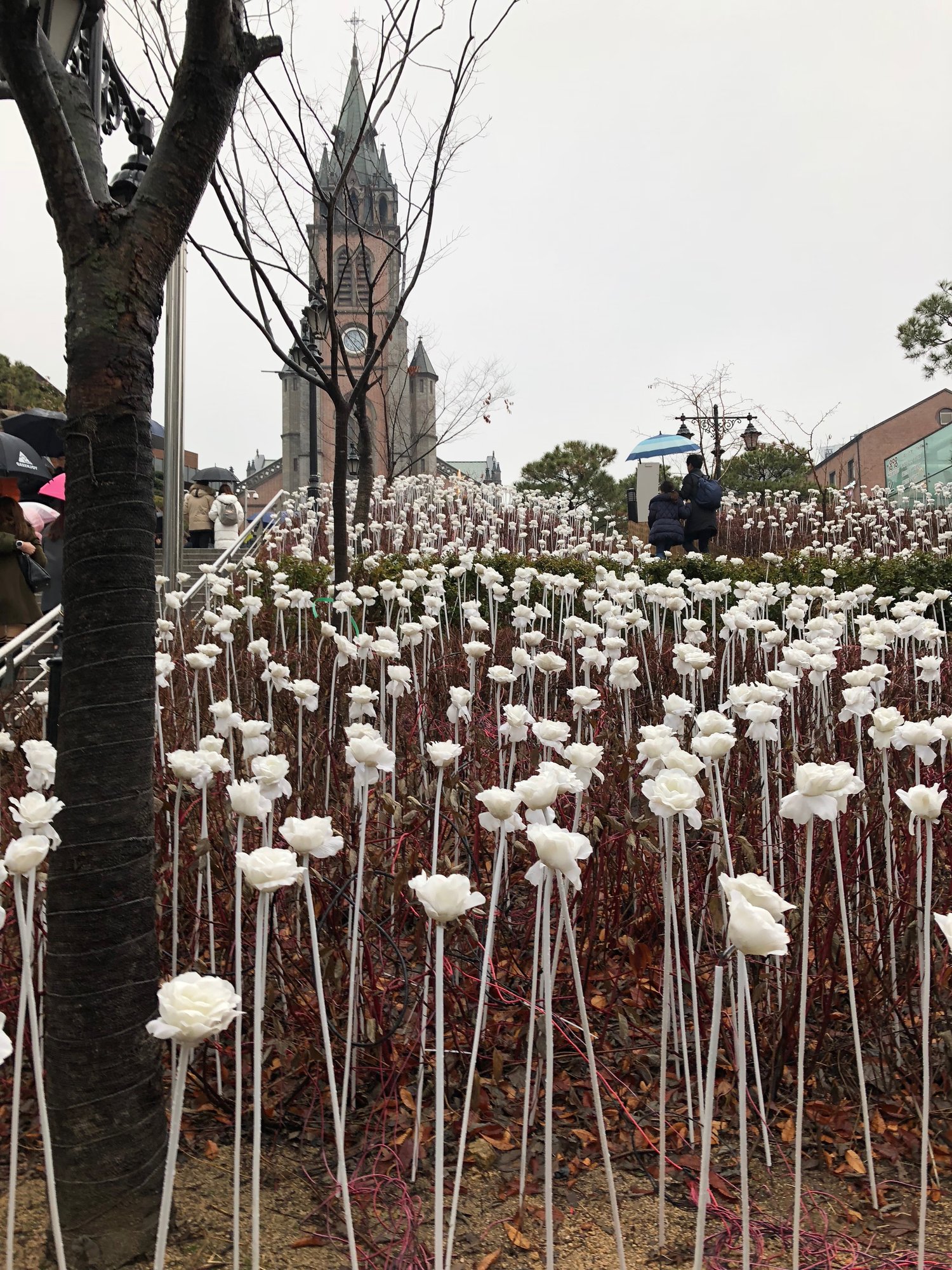 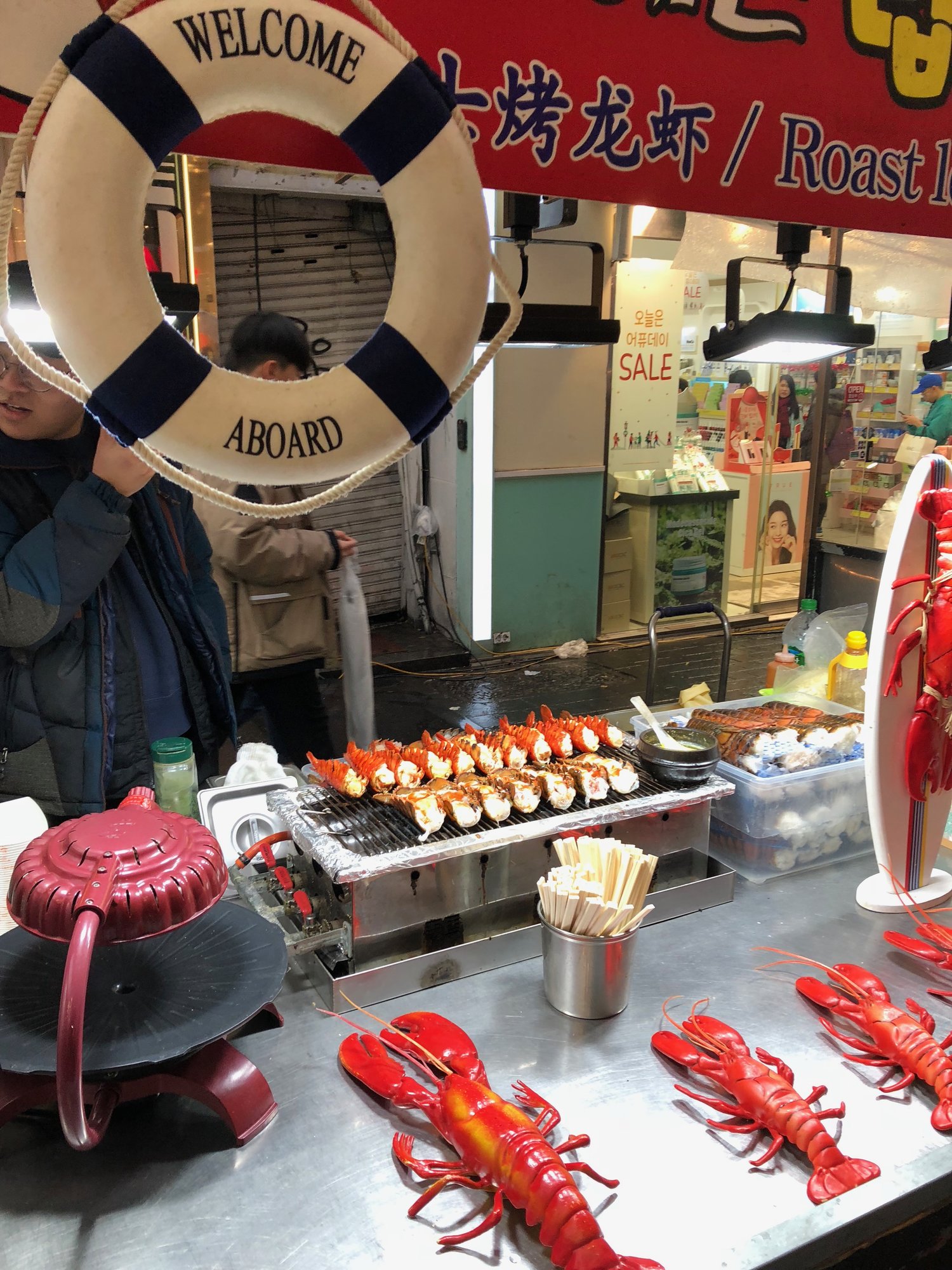 After a good chunk of time spend in the town, we headed back to the hotel, packed up, drove back to the airport and were clean and refreshed for our flight. The airline tried to right their wrongs by letting us cut every line and giving us $20 food vouchers (that didn't work on alcohol mind you), but we were just happy to have slept in a bed honestly.  We did end up emailing both Asiana Airlines AND United (they were partners) and ended up getting some money back, not all, but some, so it would definitely could have been worse!

We flew in and went straight to Mikes family house in Warriewood, a suburb in Northern Sydney.  We had the most beautiful warm Christmas (which of course, I'm not used to), enjoyed some family time and went to bed, jet-lagged, at 6:30pm.

The day after Christmas there is called Boxing Day.  It's a national holiday and one thing they have is an annual sailing race called the Sydney to Hobart Yacht Race.  So we drove to the starting point where there's a beautiful lookout to watch the boats take off!

The northern beaches are absolutely beautiful and one of my favorite ones just so happens to be where Mikes mom grew up, Manly Beach.  It was just a quick bus ride away so we got to go there the next day :)  Manly kind of reminds me of a California beach town with it's main walkway, called The Corso, is filled with shops and restaurants and street performers.  We of course ended up getting a much overdue meat pie from Hamlet Pies (good but not the best, according to Mike) but before that got a drink at The Styne, a bar right on the corner closets to the beach.  They re-did their rooftop bar and named it Glass House and it's perfect for a quick beer and some snackings. 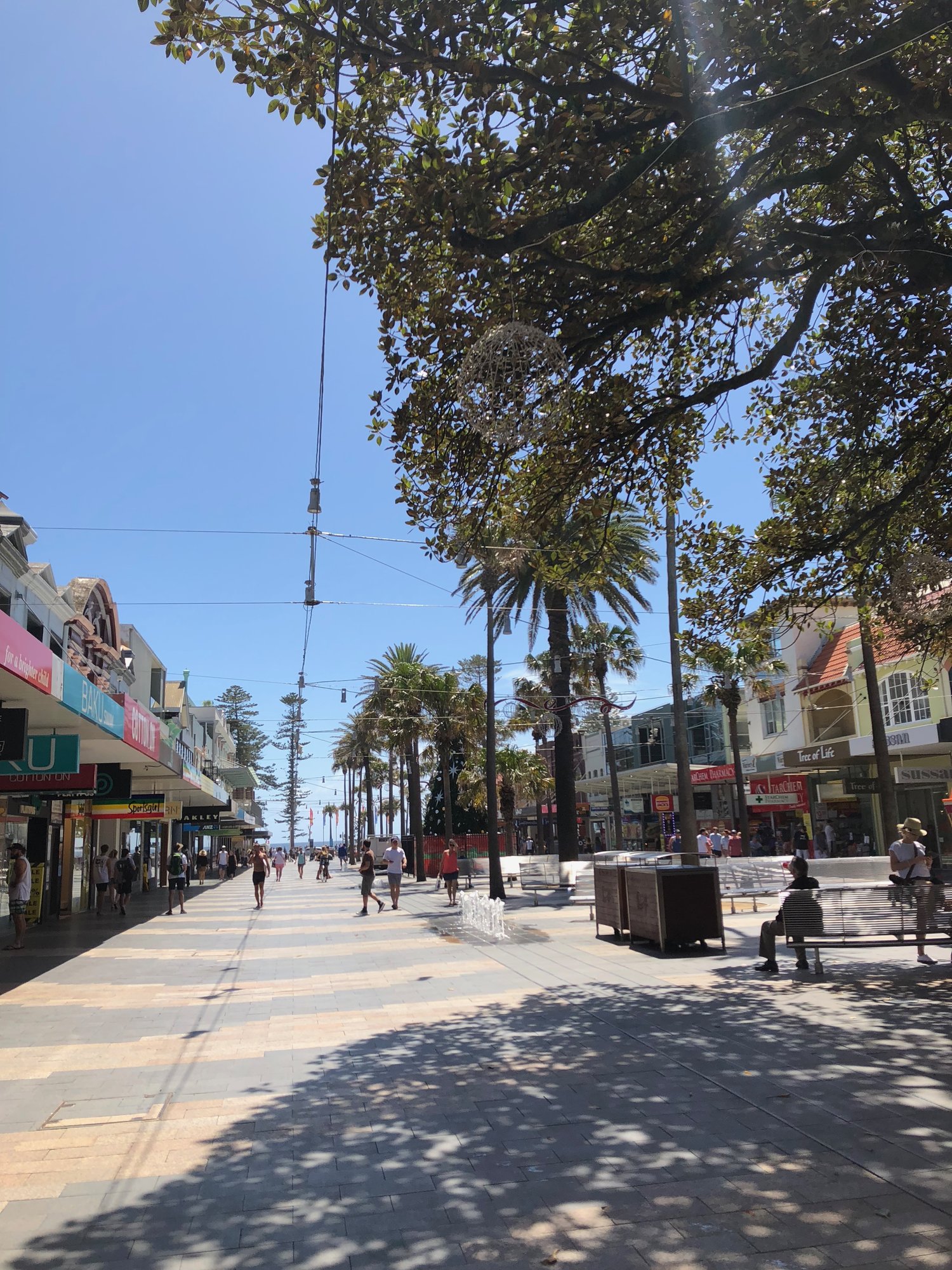 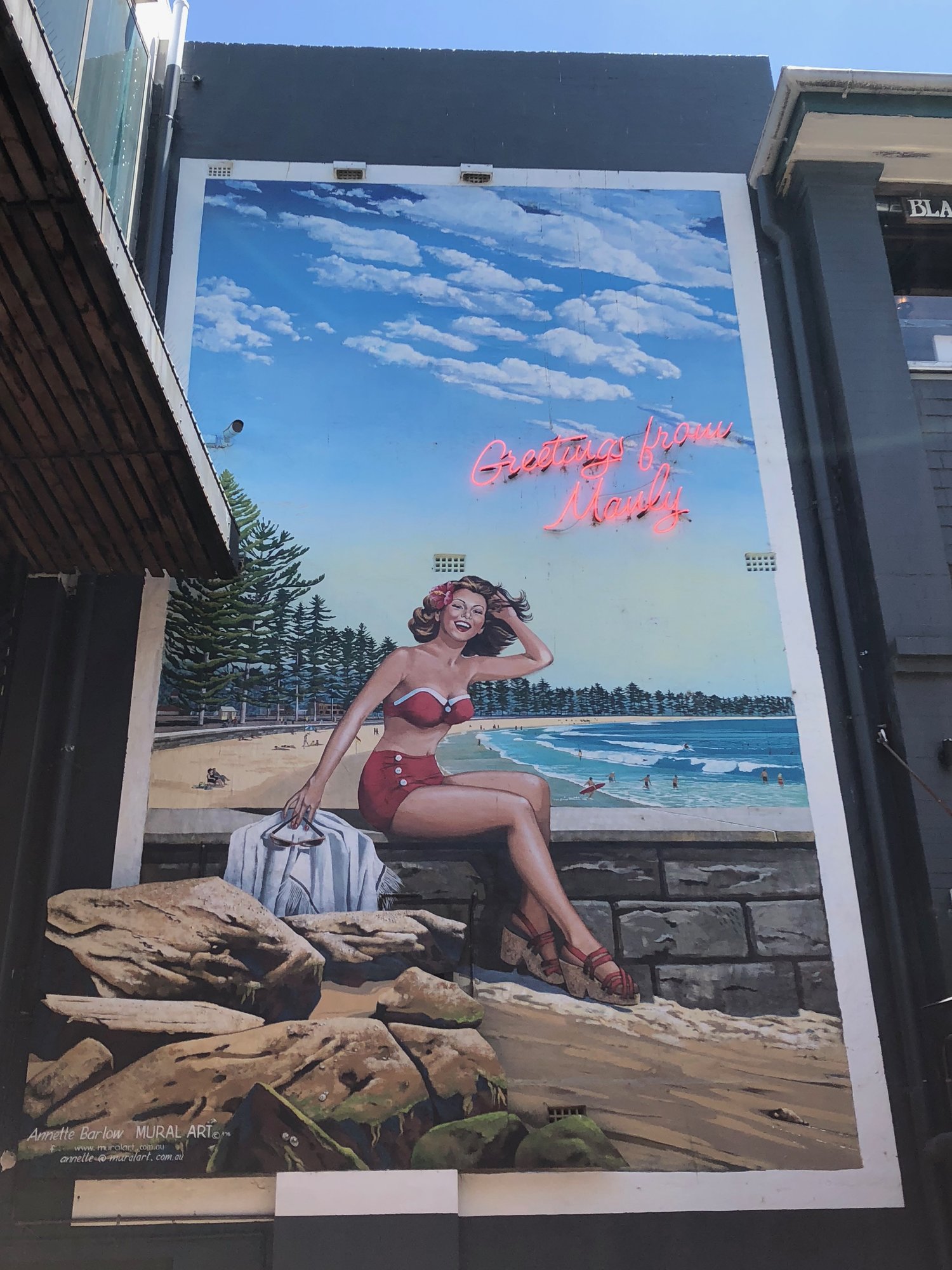 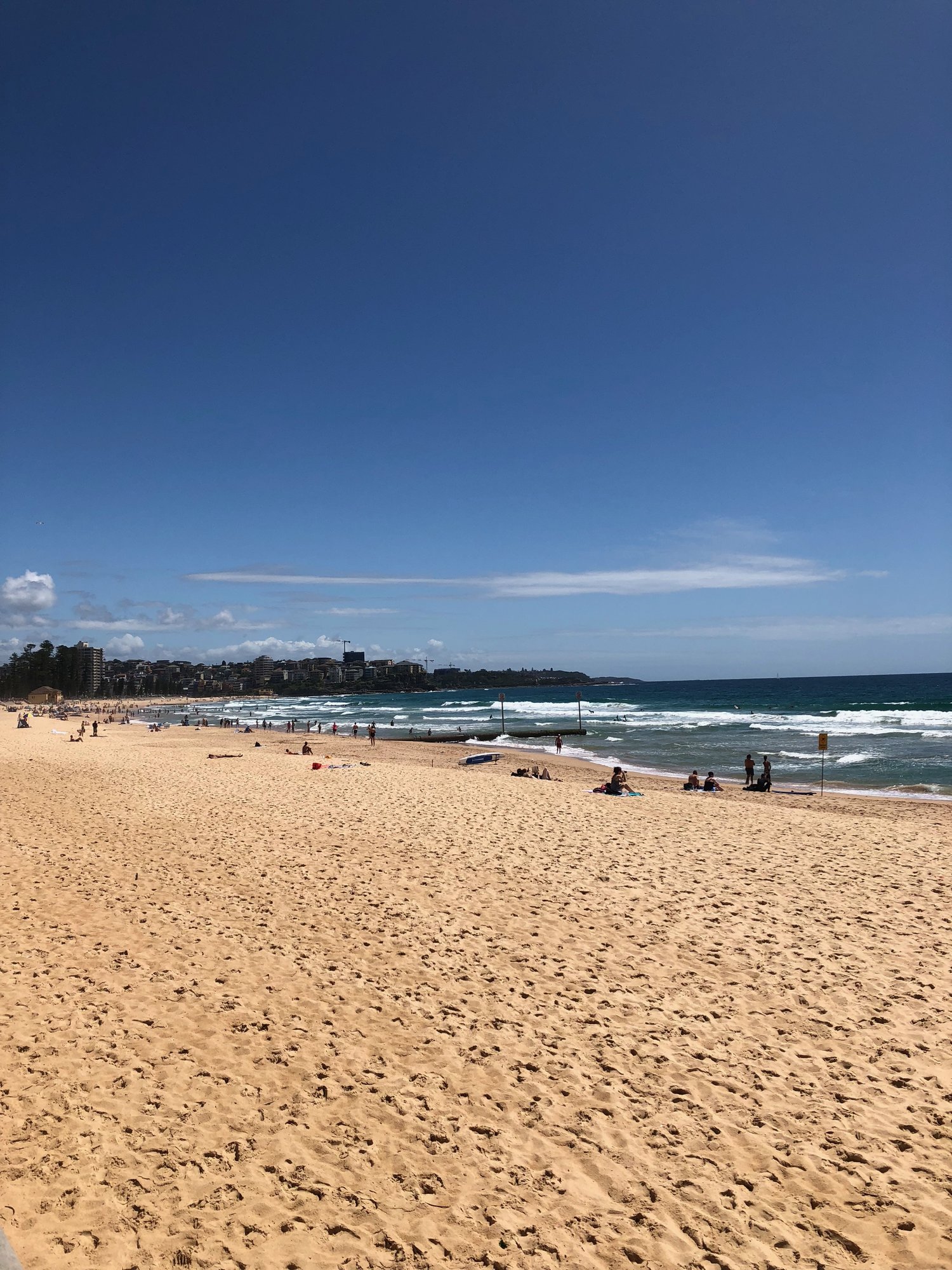 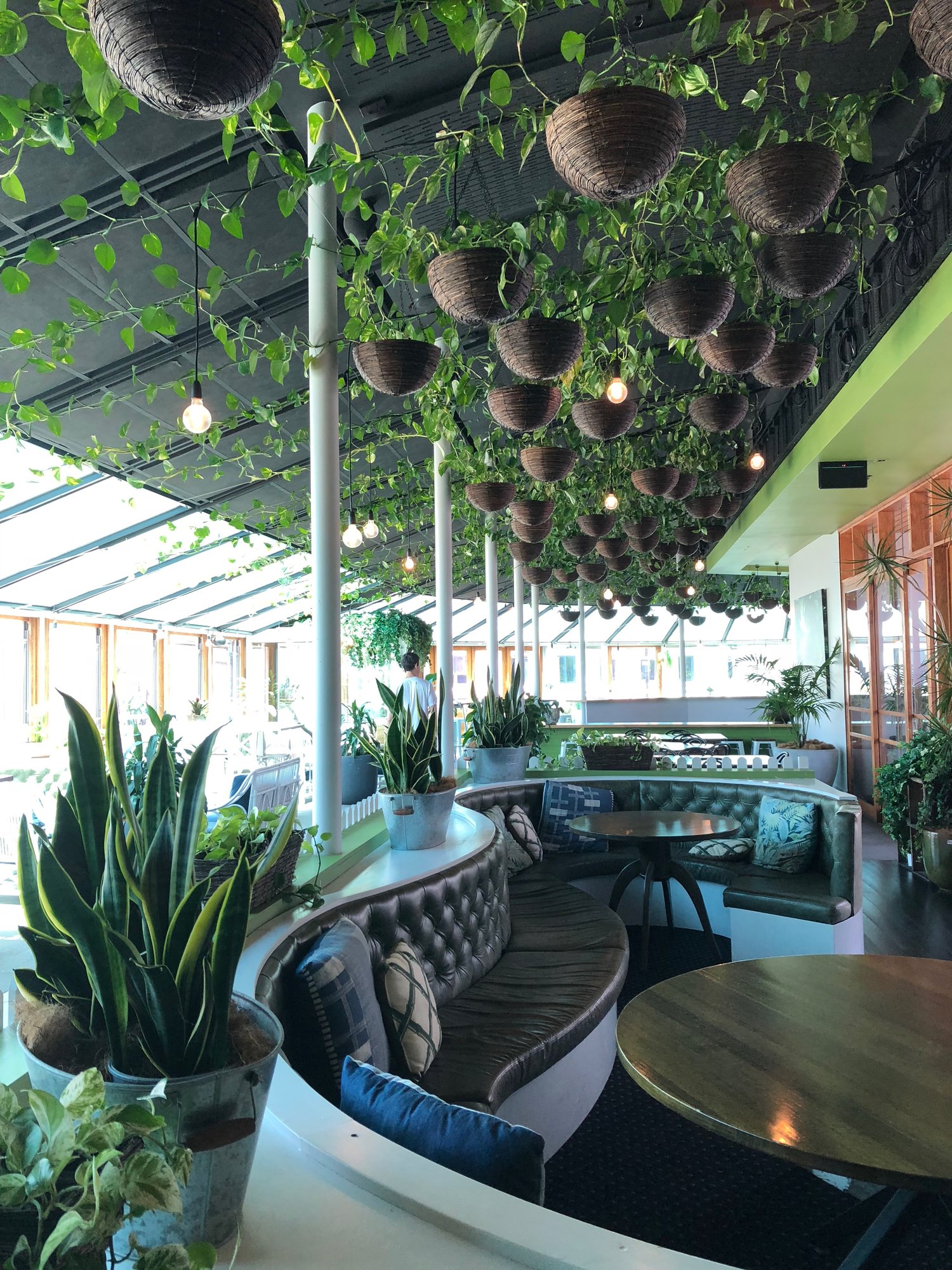 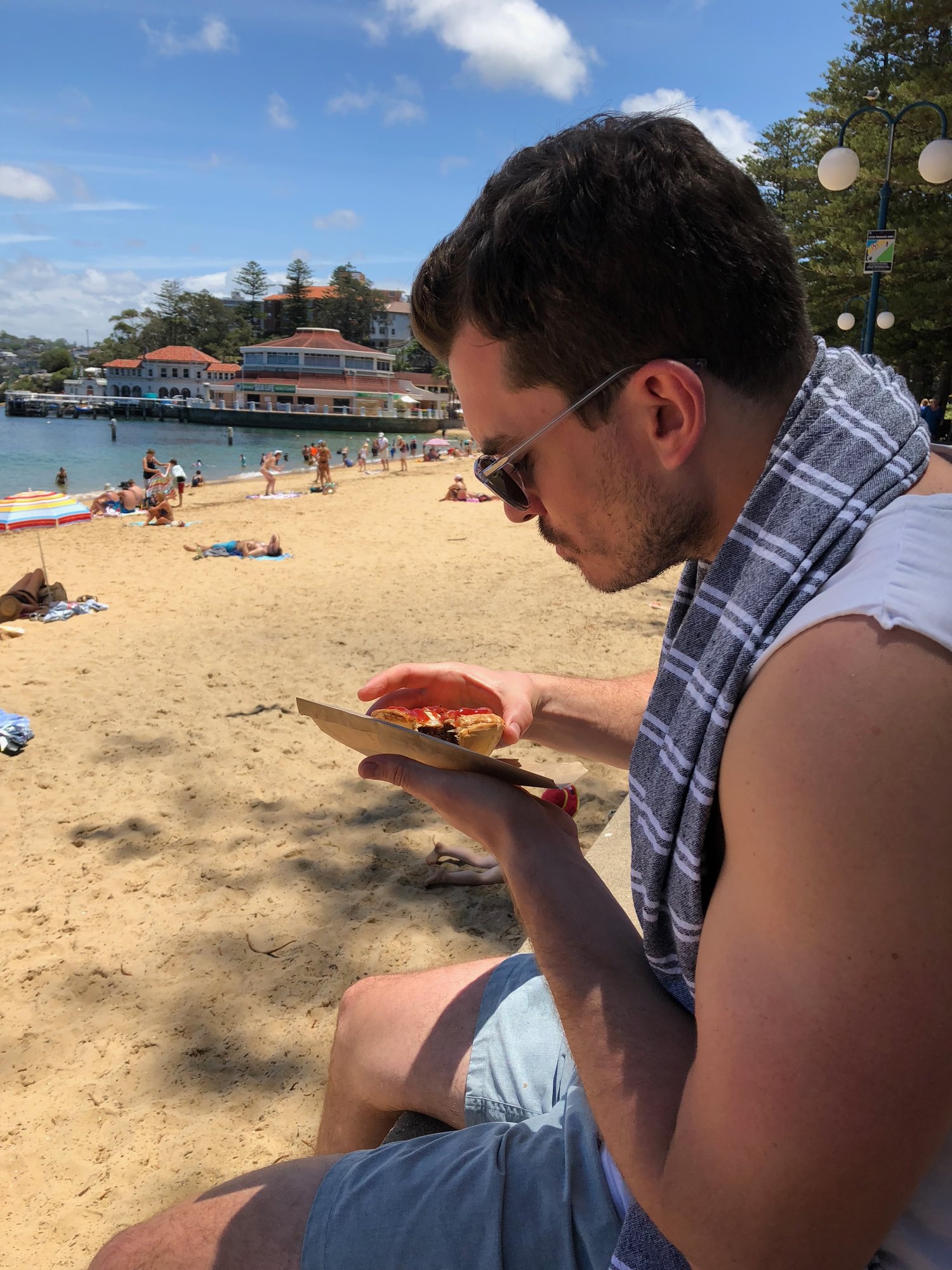 After some QFT (quality family time..just made that up), we were headed even further north to Hunter Valley which is best described as their version of Napa Valley, aka wine country. But before that, Mikes mother was kind enough to show me old tapes of him on in air talking about the FX market :)  Enjoy! (Sorry Mike <3 )

On the way to Hunter we decided to spend the day and night in Newcastle, an up and coming town on the way where Mikes brother as well as a few of our friends live.  Absolutely beautiful beaches and chill pubs and restaurants.

We arrived the next day at the Airbnb that we rented called Vinden Estate Wines, and it. was. gorgeous.  A huge mansion with every big room beautifully decorated, equipped with a huge kitchen, multiple patios, a pool and a tennis court.  AND..and, it's attached to a winery.  I honestly don't have any photos of the house as we were too busy drinking, eating and setting up a massive Slip N' Slide on the lawn, but do yourself a favor and google the estate...and then stay there when you visit. 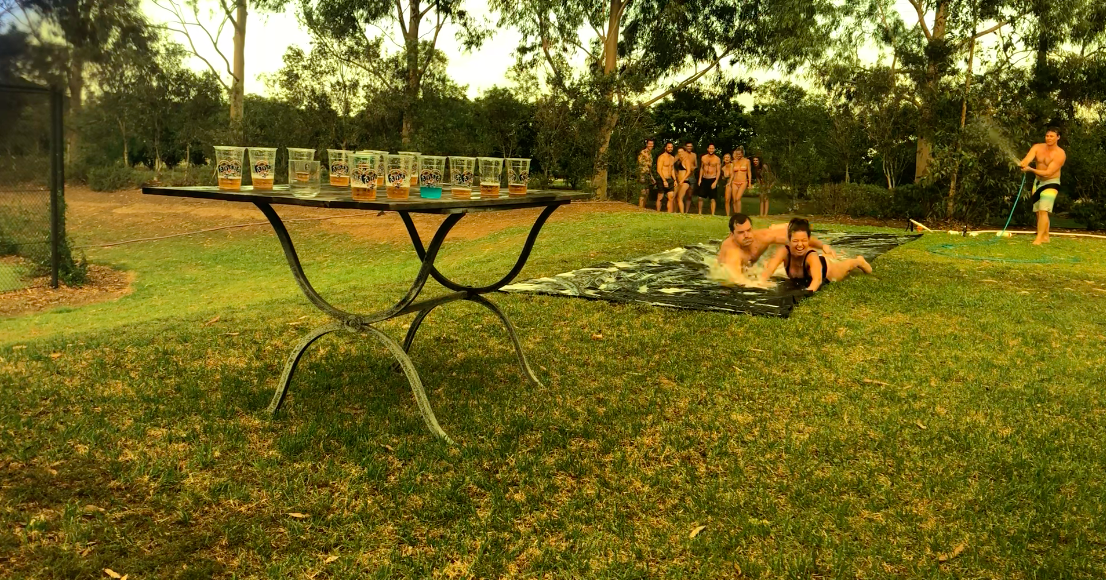 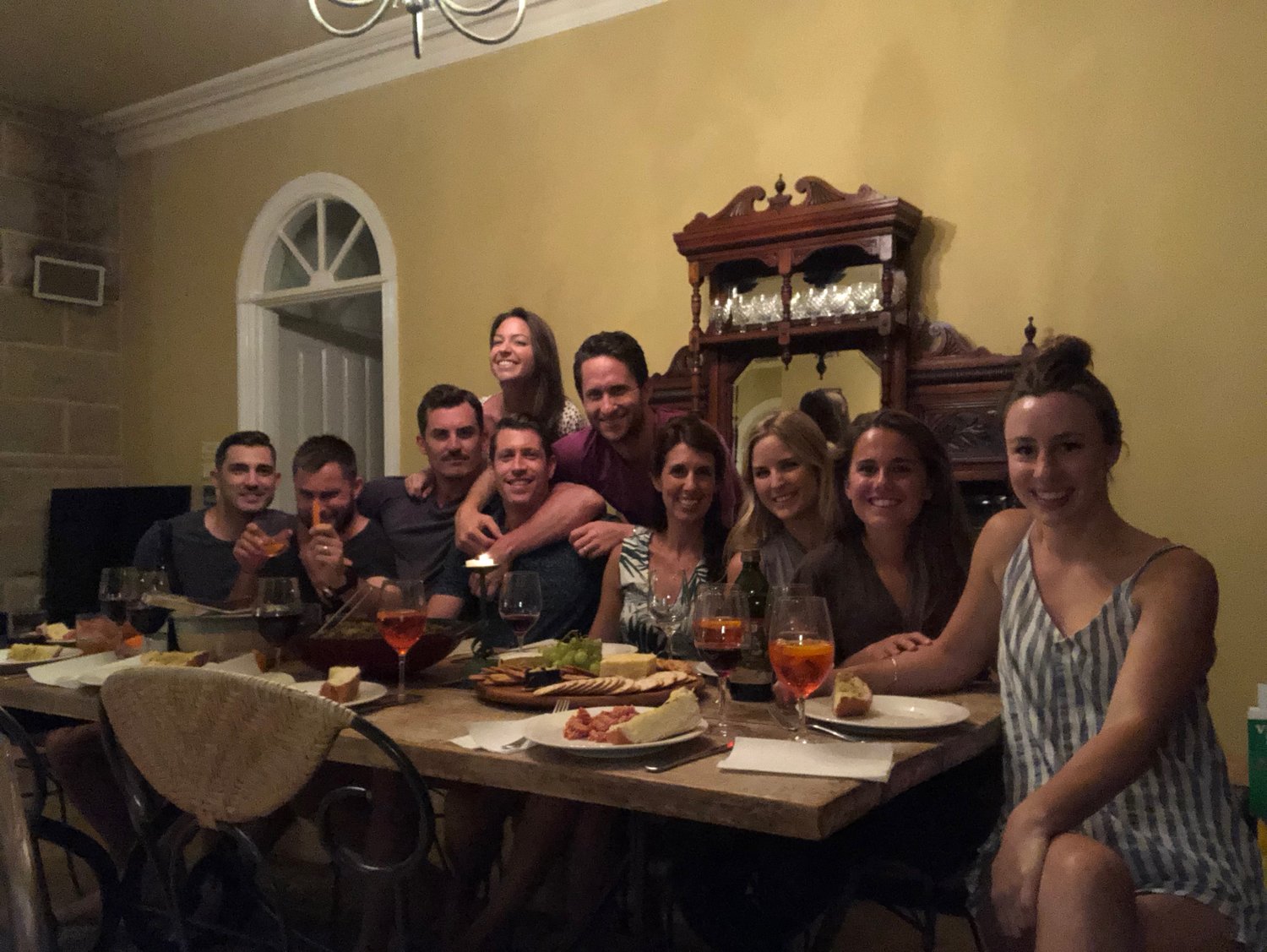 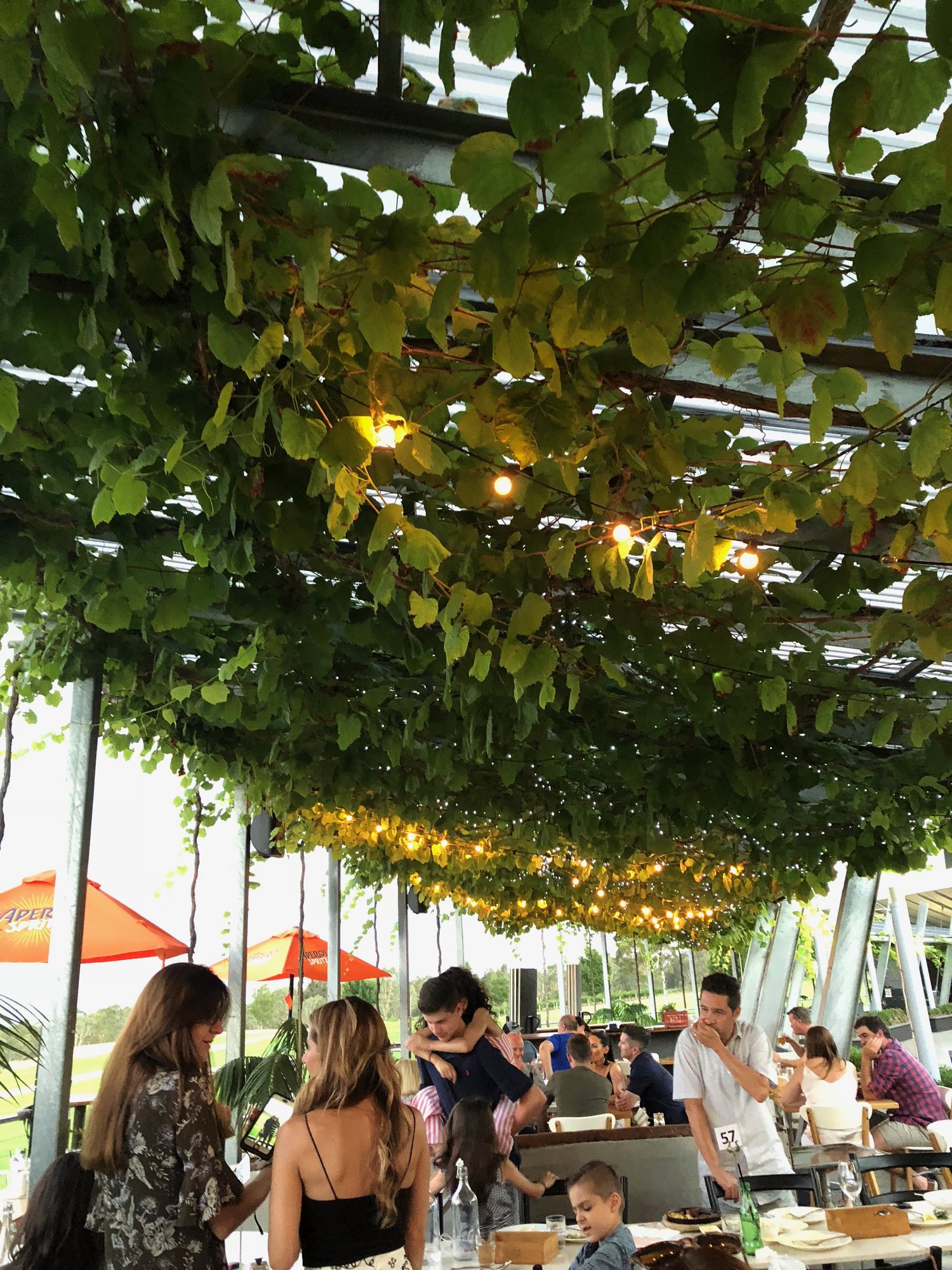 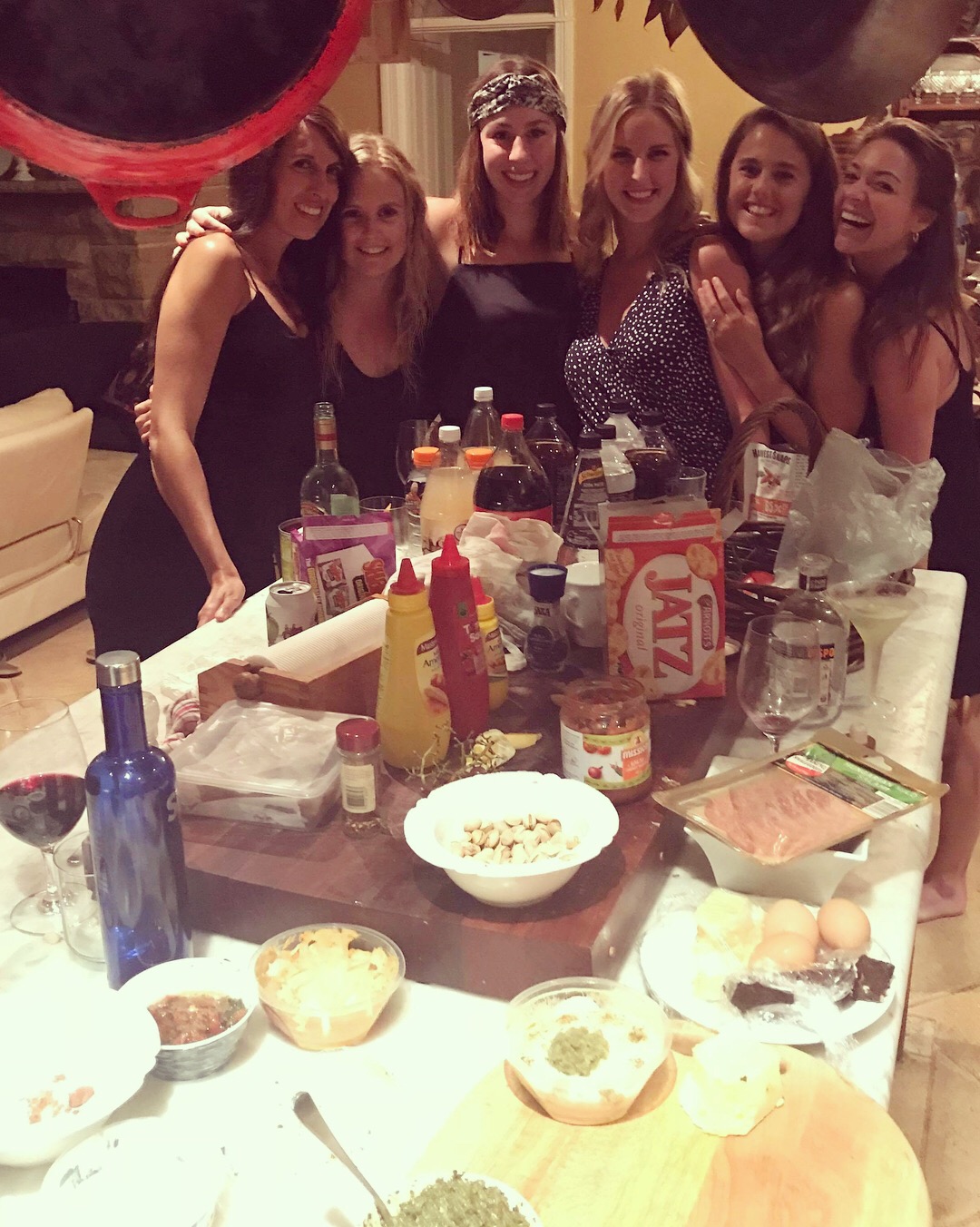 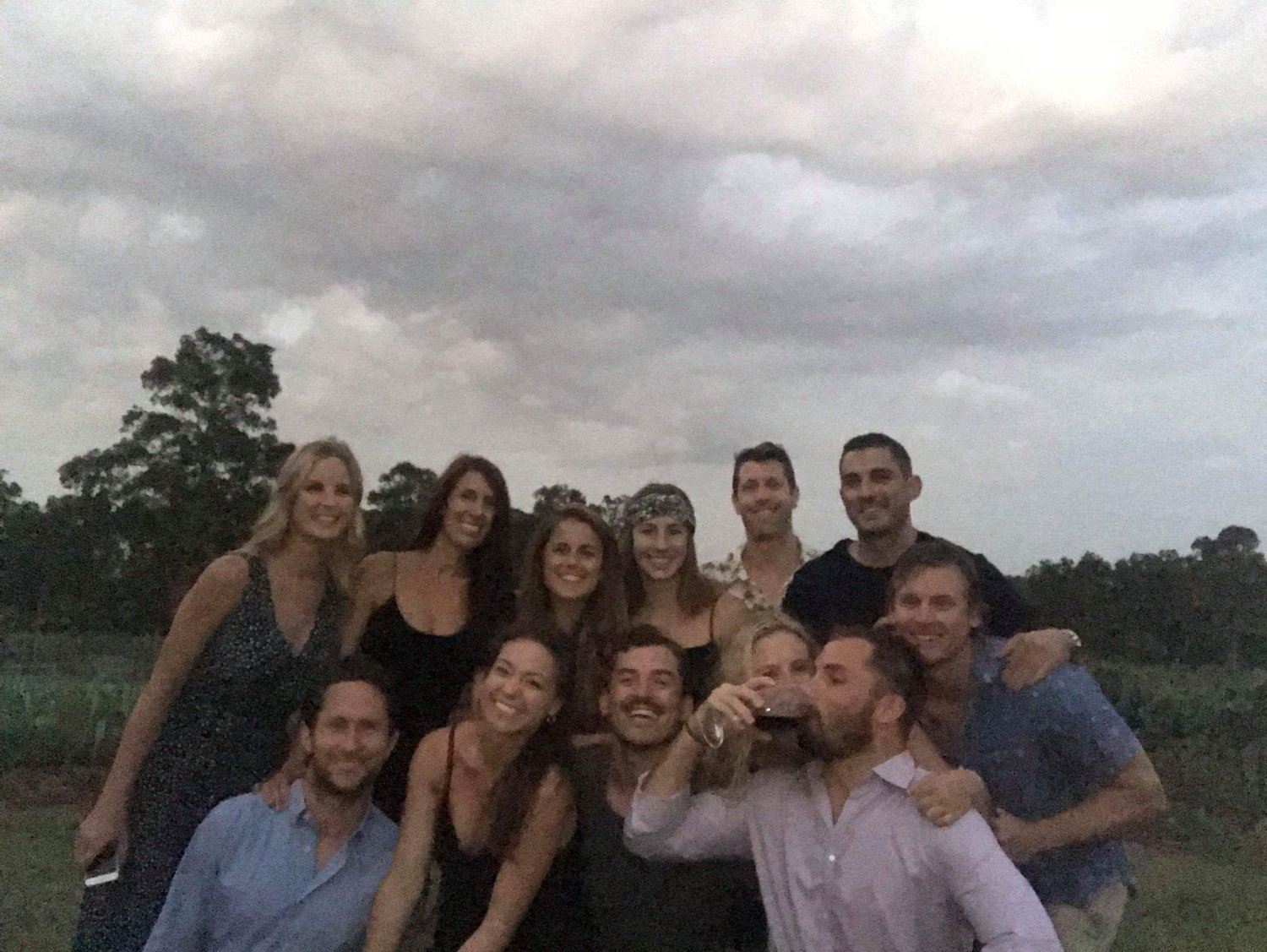 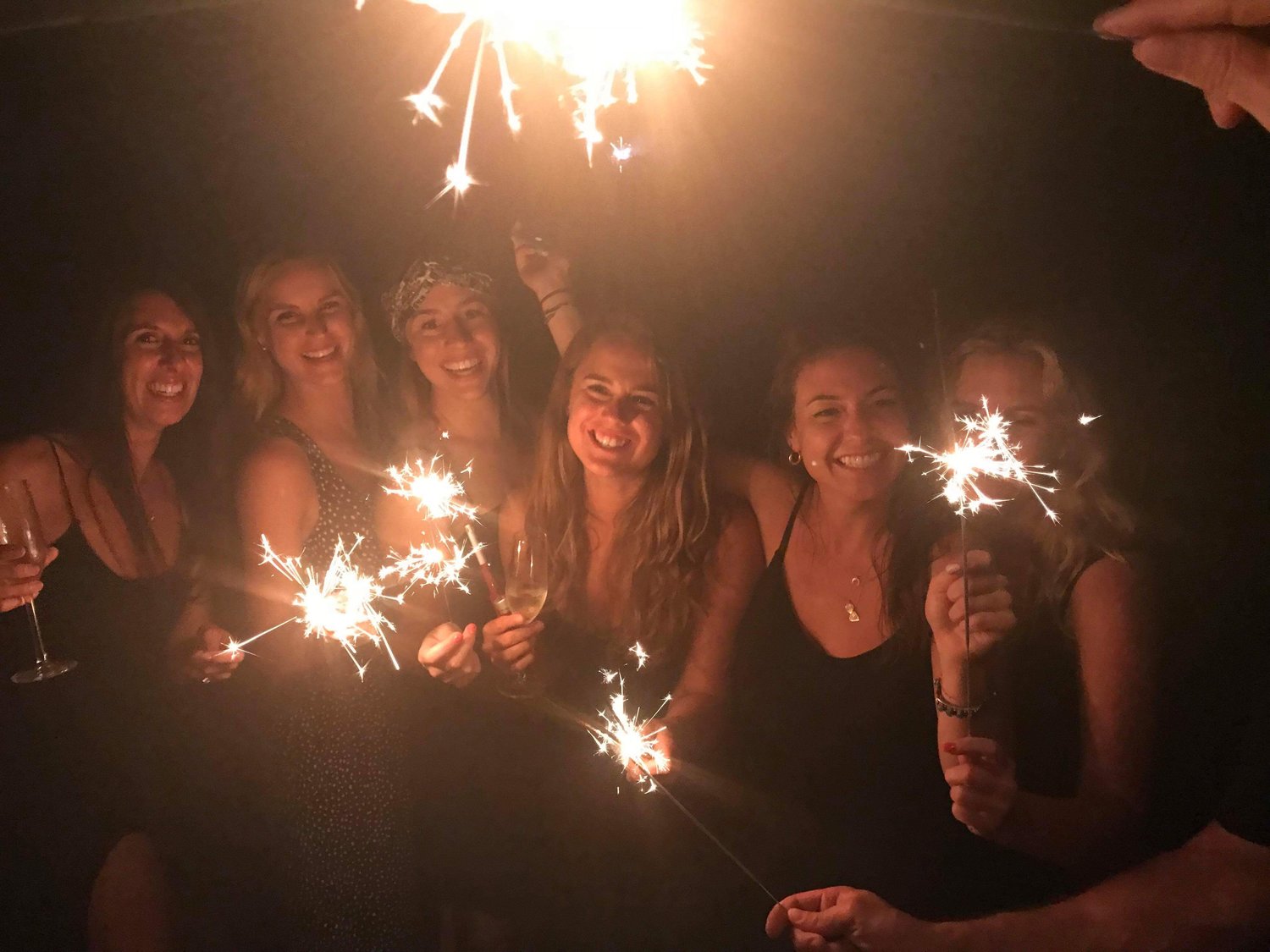 After an amazing long weekend we all parted ways knowing we'd see each other again at Mike and I's farewell before we leave to go back home so the goodbyes weren't so painful.  Mike and I were on our way back to his family house before flying out to Byron Bay!