After we got back from Hunter and had a bit of a detox, we jumped on a plane to Byron Bay.  Mike had planned a stint in Byron for us as a surprise which I thought was because it gave us some alone time and he said it was one of his favorite places in Australia.  Little did I know he had a surprise up his sleeve.

We landed in a TORRENTIAL downpour.  We also didn't have any working cellphones without wifi so when we picked up the car rental we had to also get a map to find our way to the Airbnb.  We always say we want to start using our phones less and less for directions but this definitely pushed our navigation skills to a new level with a map that cut off some parts and rain pouring so hard it was almost impossible to see out the window.  Yolo (...I hate myself for saying that)

On the drive up Mike told me one of the best parts of Byron is that it has the most epic sunrises since it's at Australia's most Easterly point. He asked if I wanted to wake up early and hike up the hill where the lighthouse is and check it out.  I, obliged without a thought in my head of that being anything out of the ordinary (I'm probably the easiest person in the word to surprise as I'll go along with pretty much any idea).

We got to our Airbnb which was in Wategos, the beach a little further over from Byron Beach and it was the cutest place I've ever seen.  The man who owned it owned the house above it, rented out the lower level to a large family, and we were tucked away in a studio around the back.  It wasn't big by any means, but the way he designed it made it so beautiful.  A mosquito net covered bed, with buddha statues and candles everywhere and the cutest patio with tons of plants and a BBQ area. 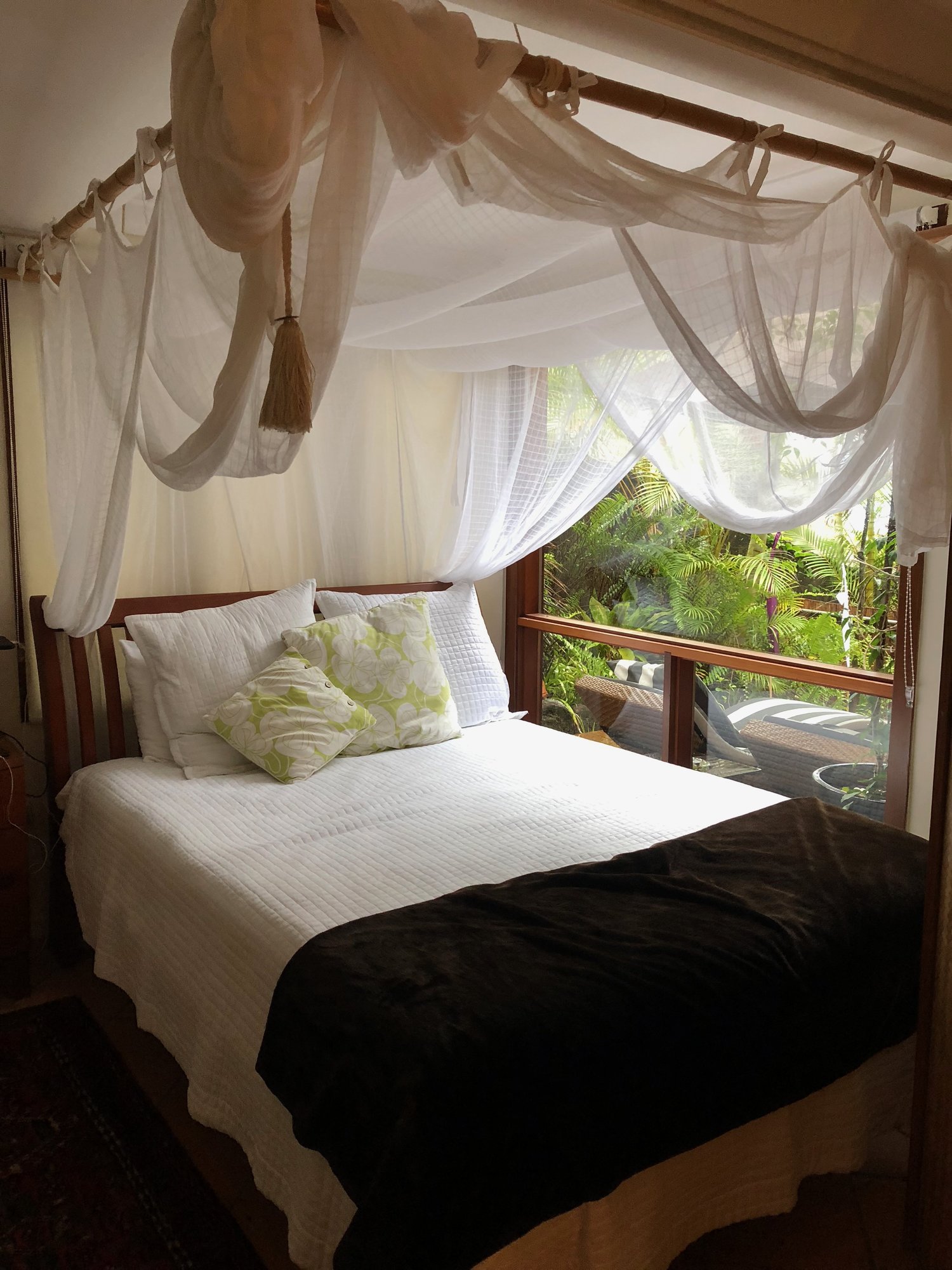 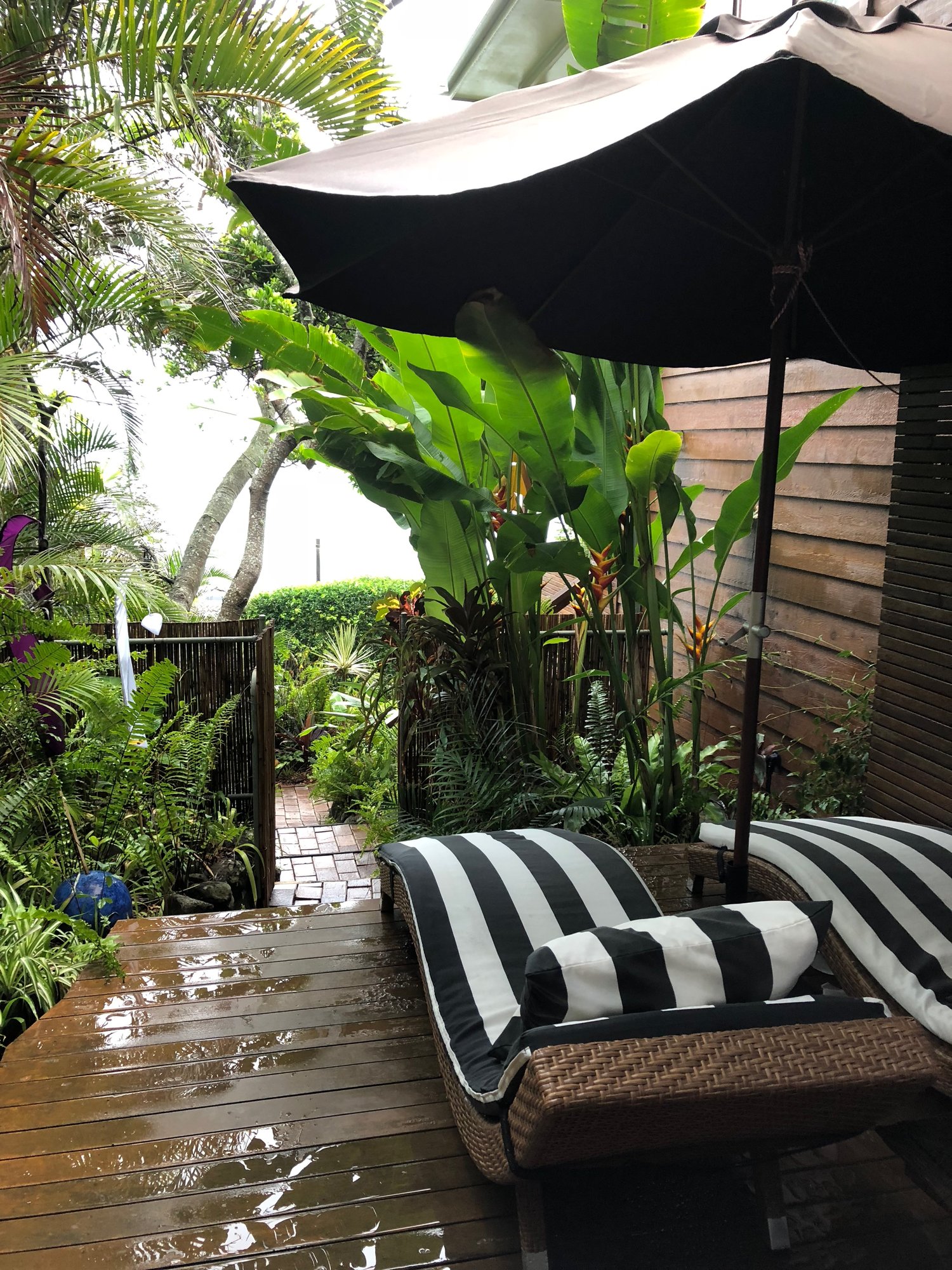 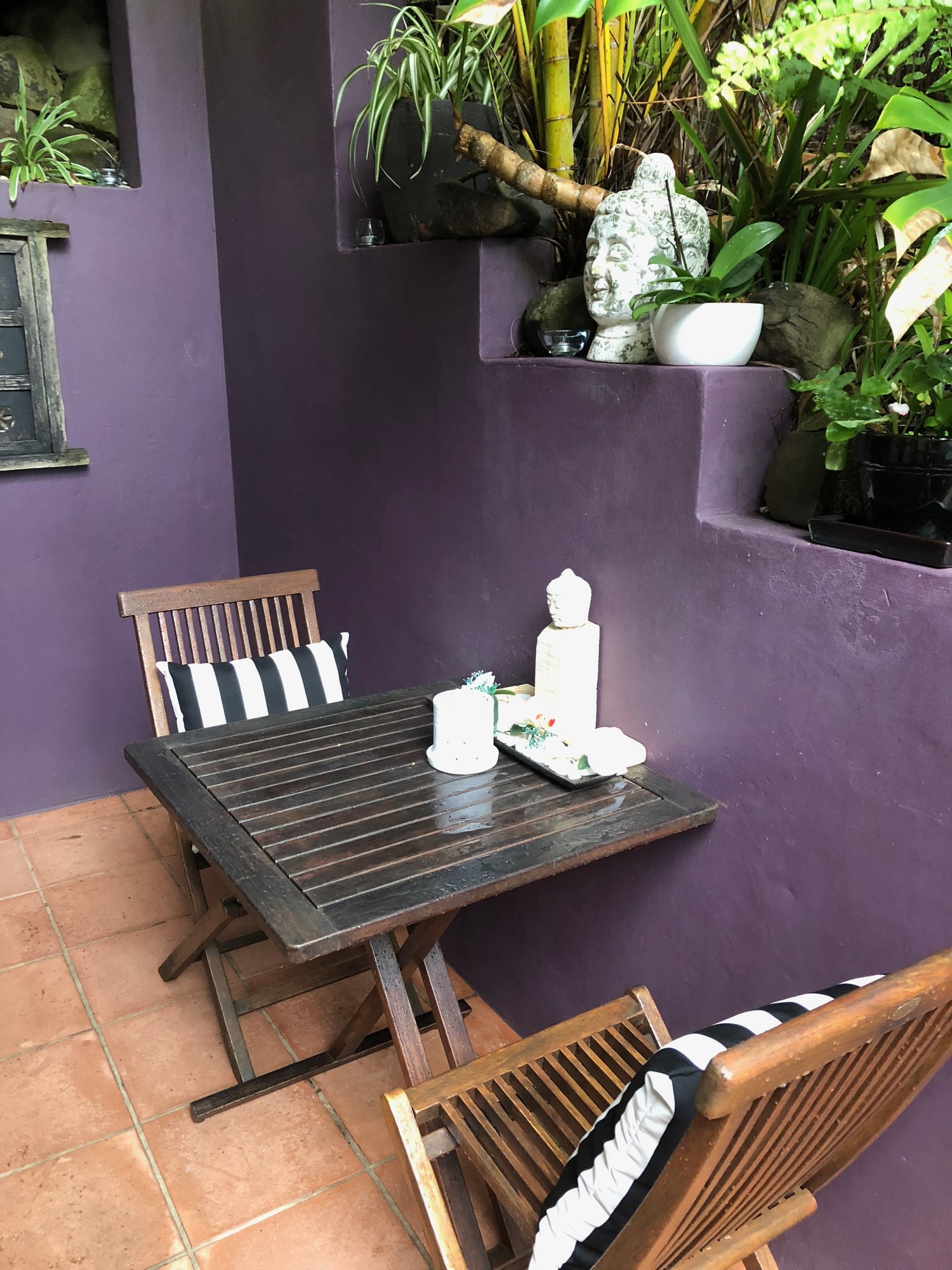 We quickly got changed and went to a Vietnamese restaurant called Light Years in town which was recommended to us by our good friends Garvey and Manth.  The restaurant was brightly colored with really cool decor and amazing food. Highly recommended!

We went to bed straight away knowing we'd have to get up early to watch the sunrise. We woke up at 5am and just as I'm brushing my teeth I hear Mike say he's going to bring a backpack to carry a towel to sit on since it'll probably still be wet outside from the night before and we should bring some fruit and water too since we'll just stay there and have breakfast. We walked out and it almost looked like the sun already rose cause it was full moon and it was so bright that it looked like it was daytime!

We hiked up towards the lighthouse were theres a patch of land laid out lined with cobblestones and benches and the sign that shows it's the furthest east you can go in Australia. The view was absolutely beautiful, but as soon as we sat down we knew we wouldn't be alone as sure enough joggers and families started to come and sit at the other benches.  Mike suggested we go somewhere a little more private and I agreed, so we set off and found an isolated bench, surrounded by bushes and with an even closer view of the water.

I won't go into all the good details but as you can predict, once the sun came up, Mike went down on one knee, and I was so surprised I lost my sh**.  I took these photos right before it all went down. 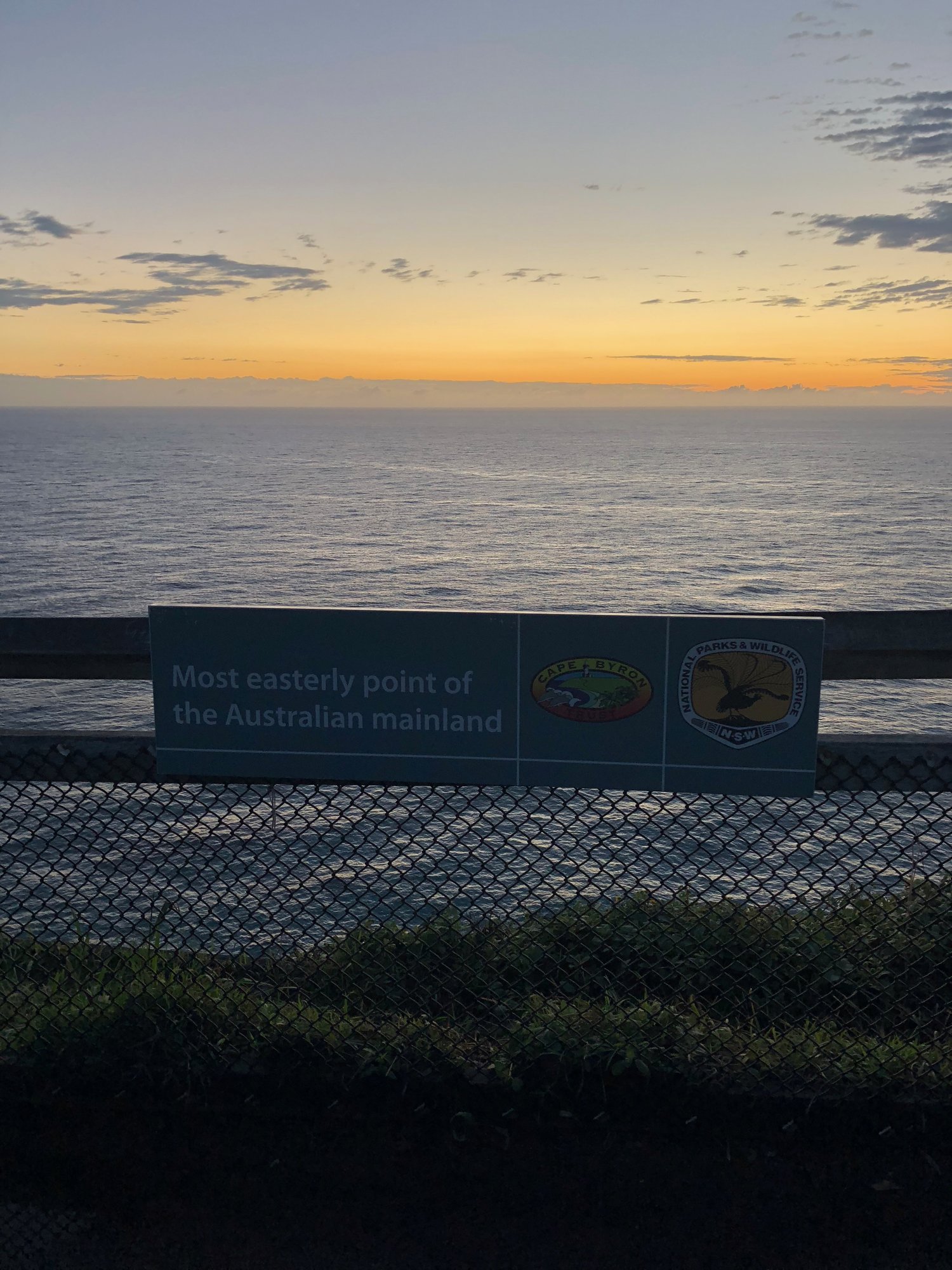 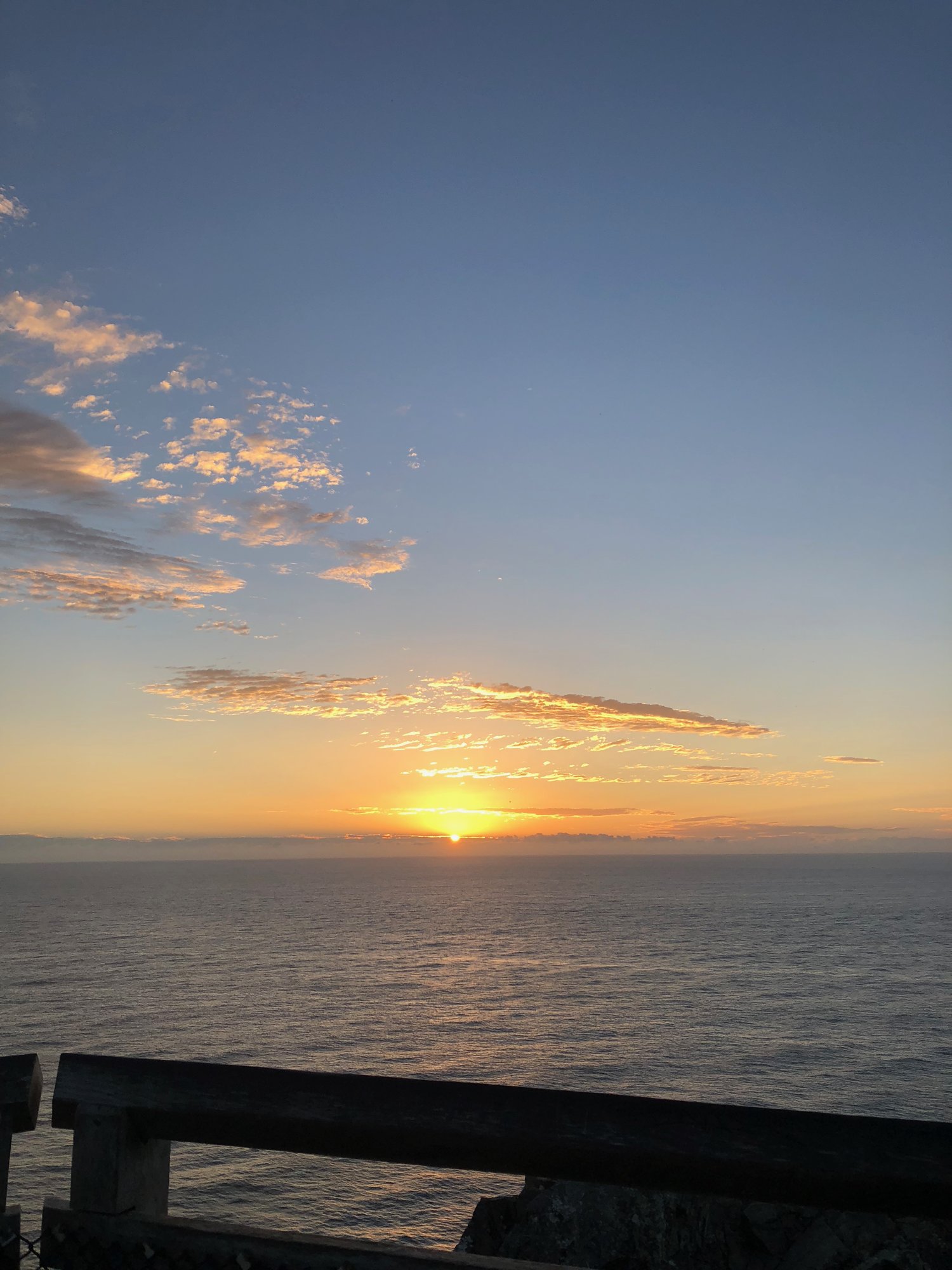 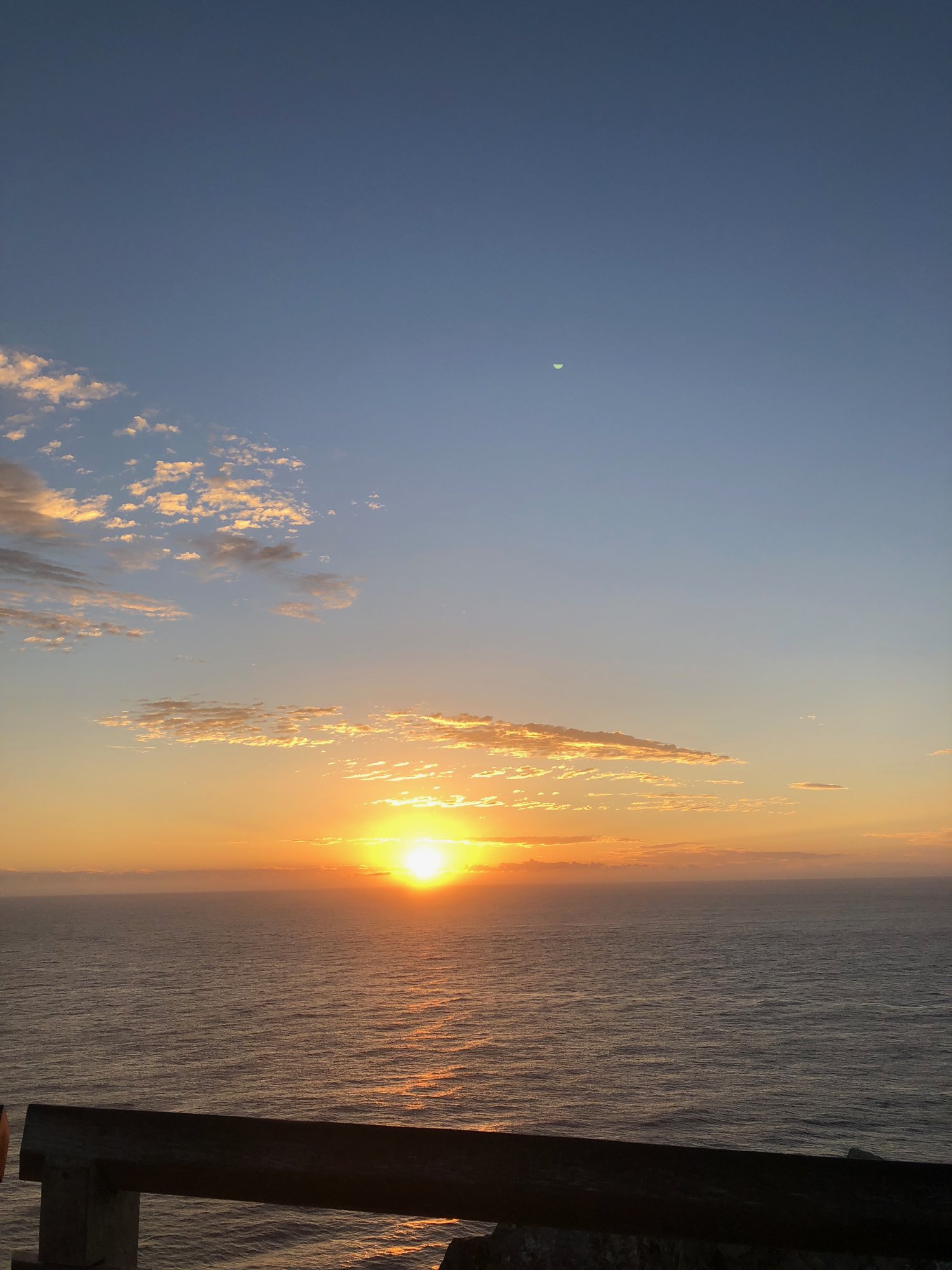 Little did I know, Mike packed a bottle of champagne, glasses and some fruit to enjoy after he surprised me (no wonder that book-bag was so full and he was carrying it like a weirdo).  We stayed there for about an hour longer and then realised we should probably see the lighthouse (after I stopped crying of course).  The views on the other side of the cliff were just as ridiculous. 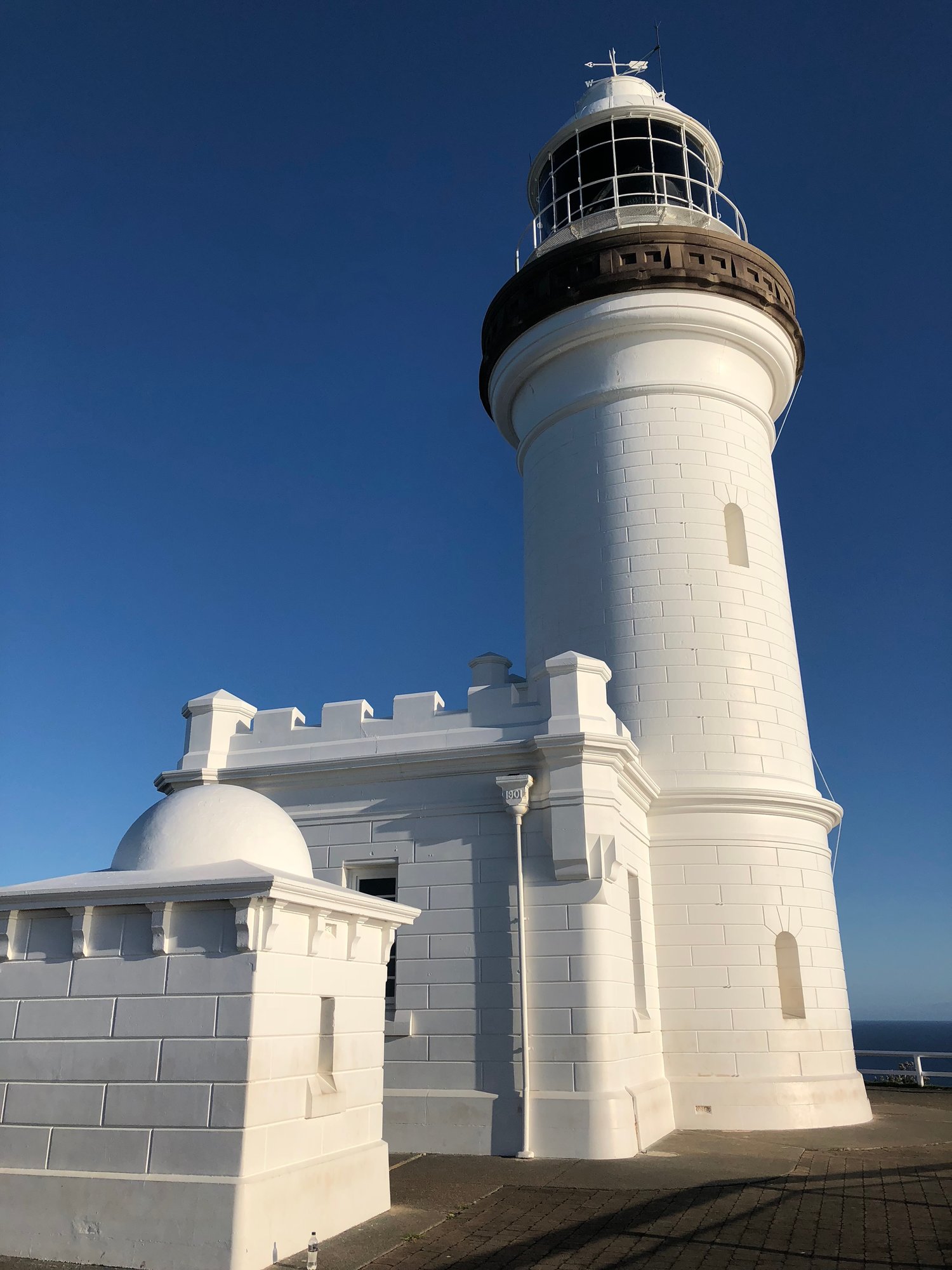 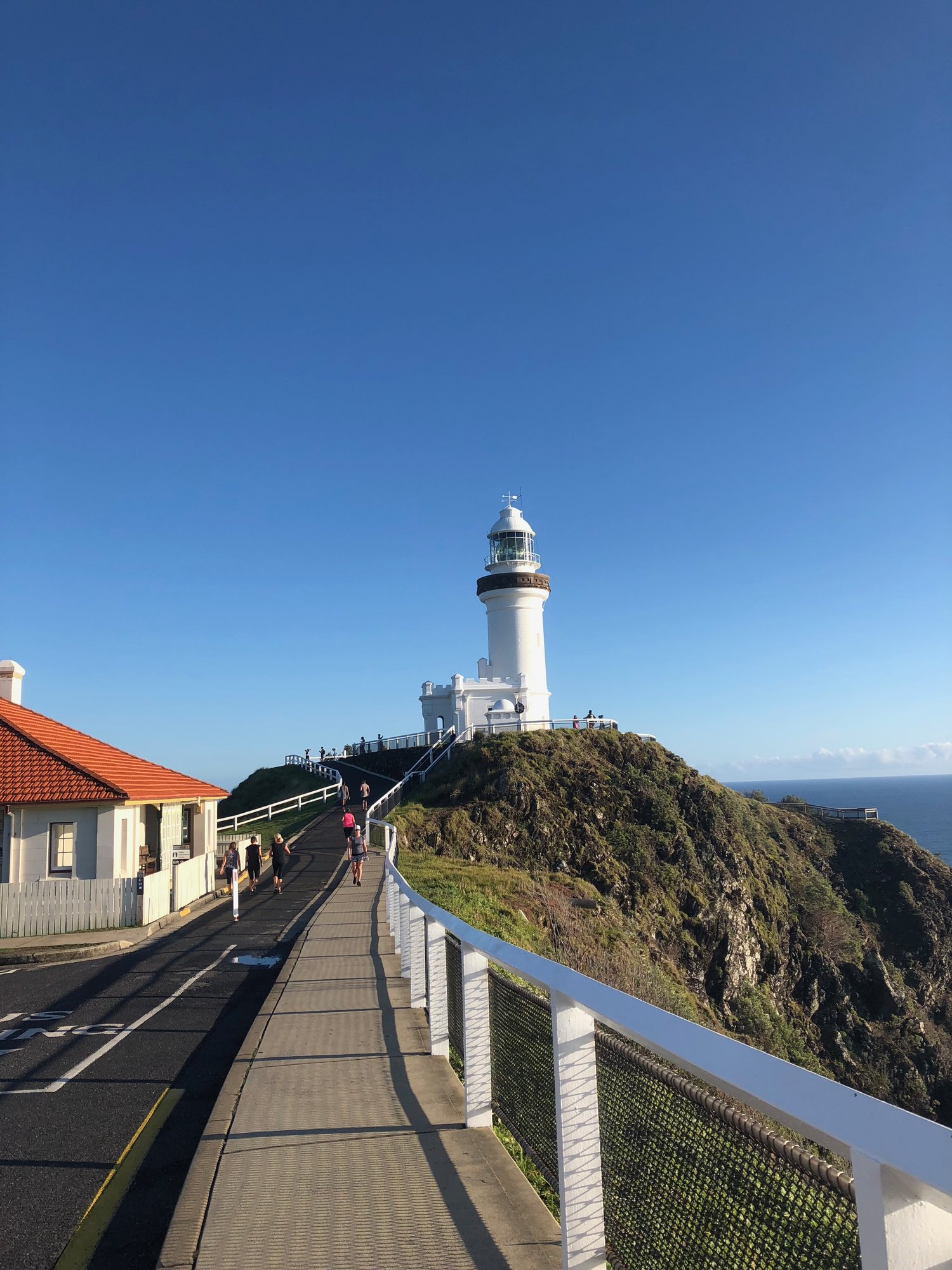 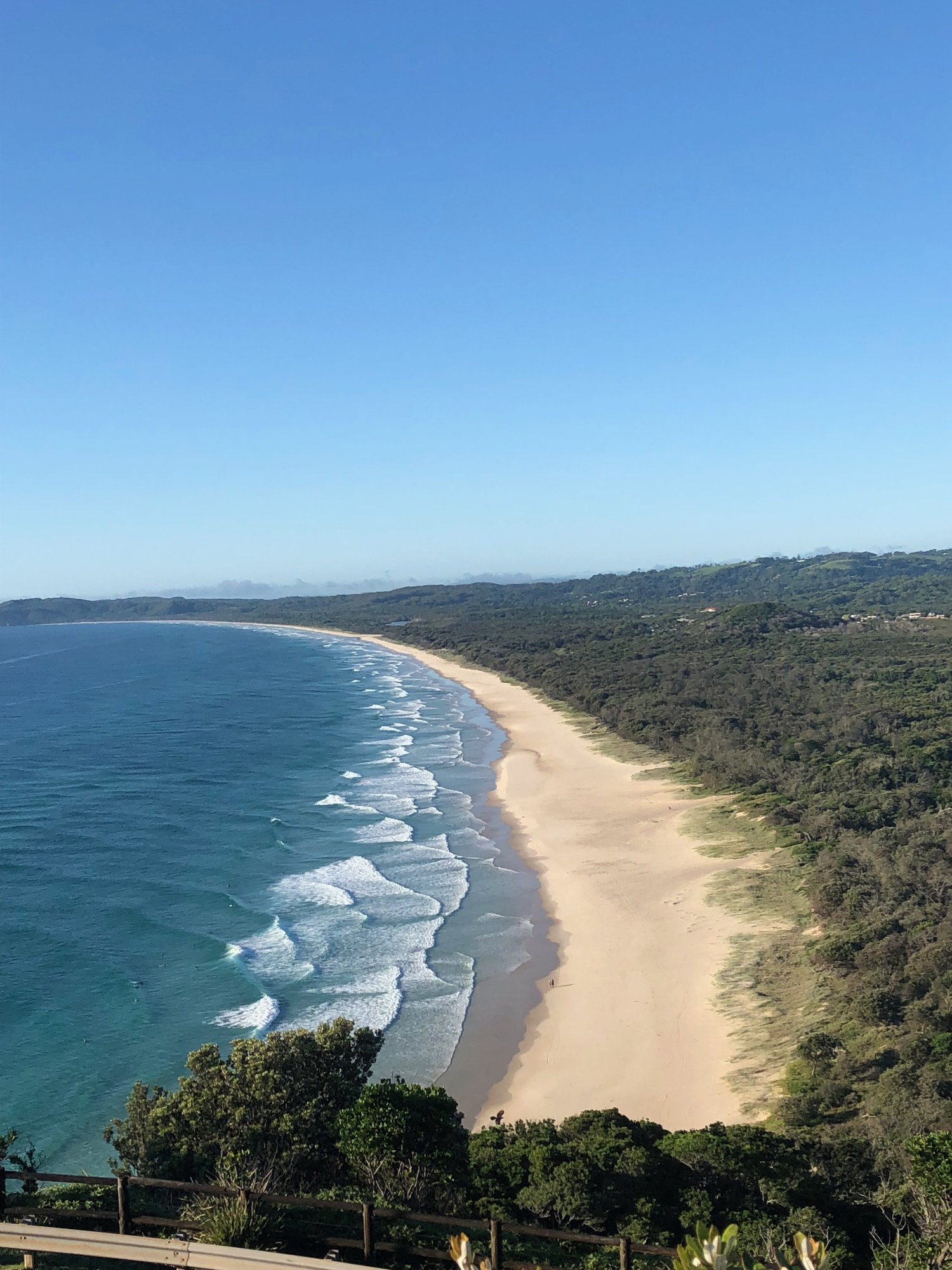 That day was perfect.  After going back and calling our closest family and friends we realized how amazing it was to not have cell phone service once we left our Airbnb so we can relax and enjoy the beach.  This is when I realized how amazing Byron Bay is.  It's has this hippie/beach culture unlike anything I've ever seen.  Everything single restaurant was unique and had THE coolest decor and amazing food.  There was tons of shopping everywhere and huge bars along the beach, all within a few blocks radius.  When walking around we'd see women in their flowy skirts and tops dancing to street performers, or little alley ways that decided to throw a concert in it.  I swear to god I could move there. Some of the places we ate were The Pass Cafe for breakfast (which was on the way from where we stayed to Byron Beach),  Combi (best Acai bowl I've ever had), Duk (chinese), The Mez Club (greek), and then other nights we just picked up some meat and veggies and BBQ'd back at ours <3 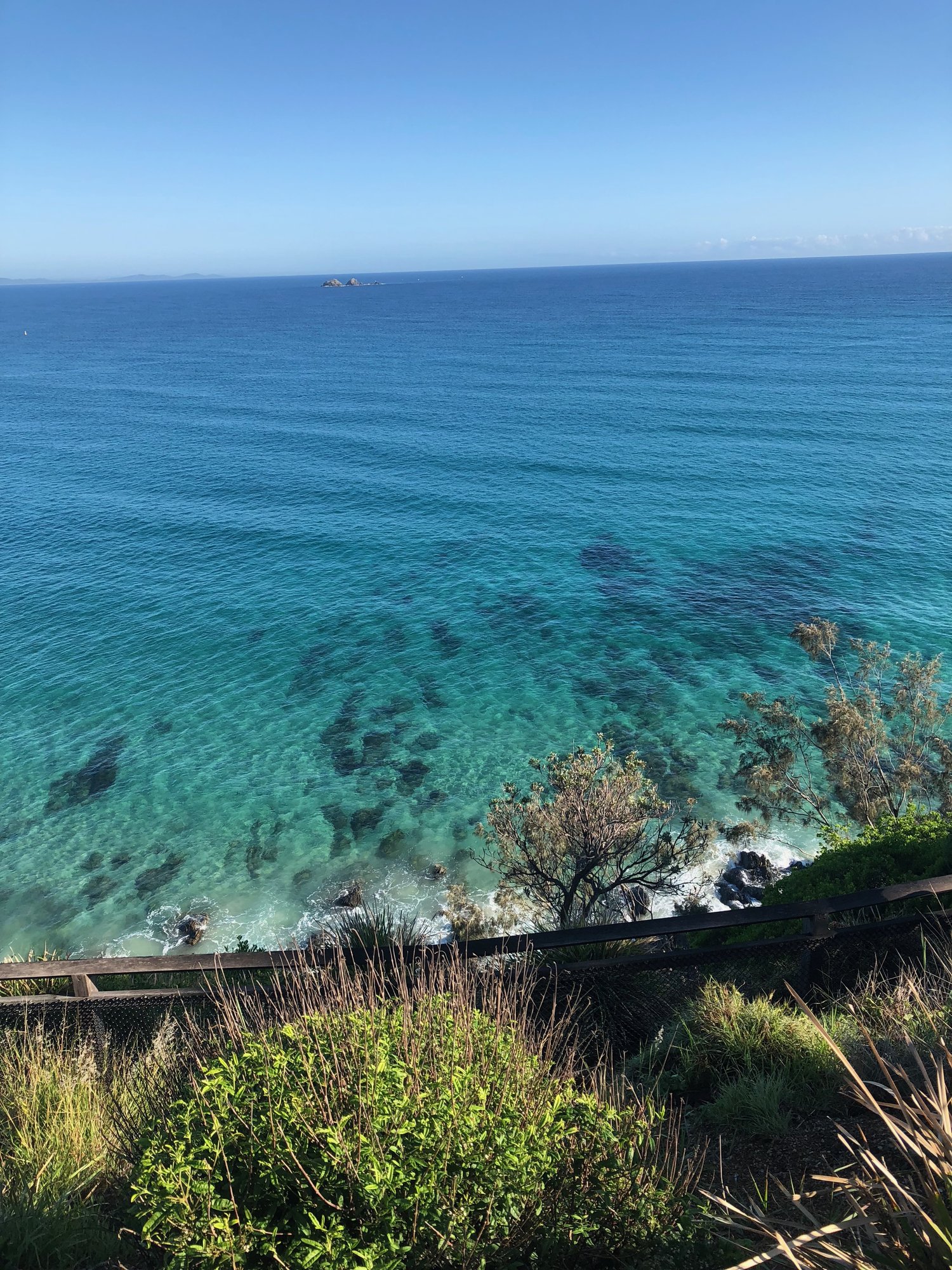 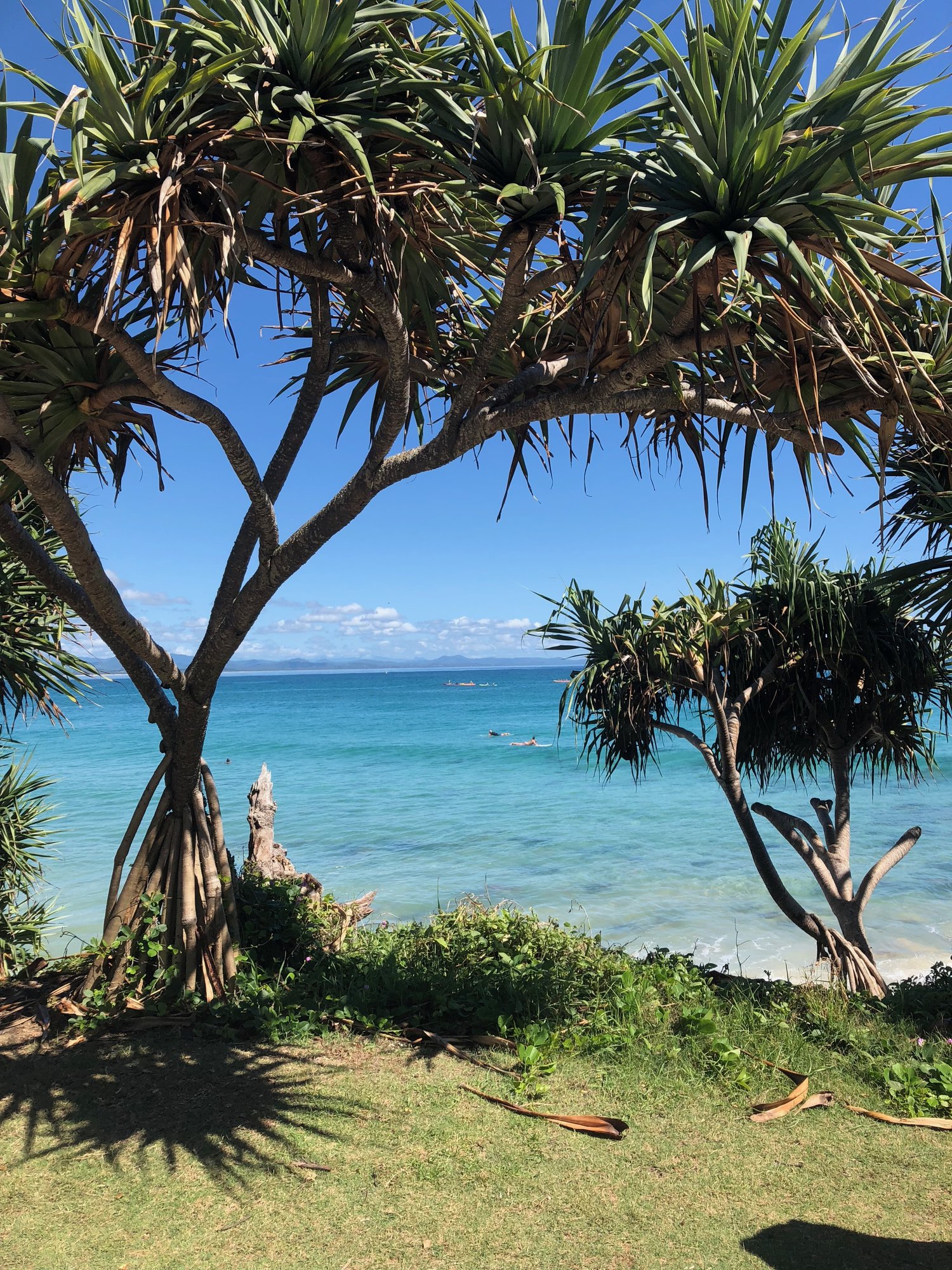 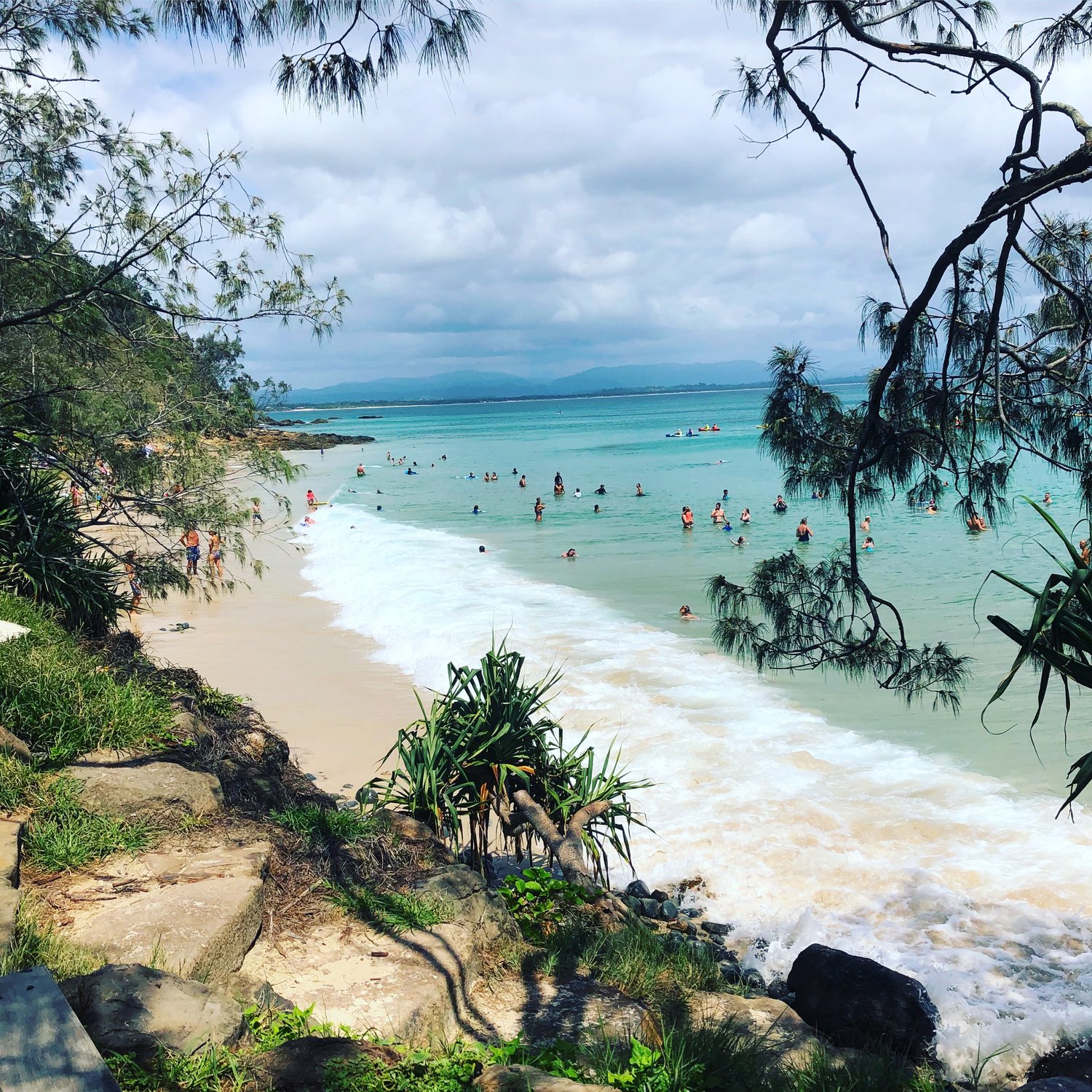 We even happened to catch a Paddle Out Ceremony, which a memorial service for a surfer that has past away.  About a 100+ surfers started to come down to the beach one by one and make a giant circle in the water to celebrate his life.  Pretty incredible to see in real life.

There were a couple towns outside Byron that we were told to check out.  We were definitely hesitant to drive 30 minutes away without cell phone service but we made a makeshift map quest (old school), googled the directions before-hand, wrote them down AND carried a map, and surprisingly enough, we survived.  SO so glad we did it because it let us check out these amazing places.  One being this "town" called Federal.  I put town in quotations because it was actually just one dirt road with about 4 businesses on it.  One coffeeshop that was a bohemian style dream, one clothing store in what looked like a barn, a post office, a drug store and ONE amaaaazing japanese restaurant.  It's called DOMA, and it's run out of a tiny shack. You basically find a spot wherever you can, on a half weathered picnic bench outside, against a high top, or even on the street and they bring your food to the number they give you.  The food was so incredibly good, I still rave about it. 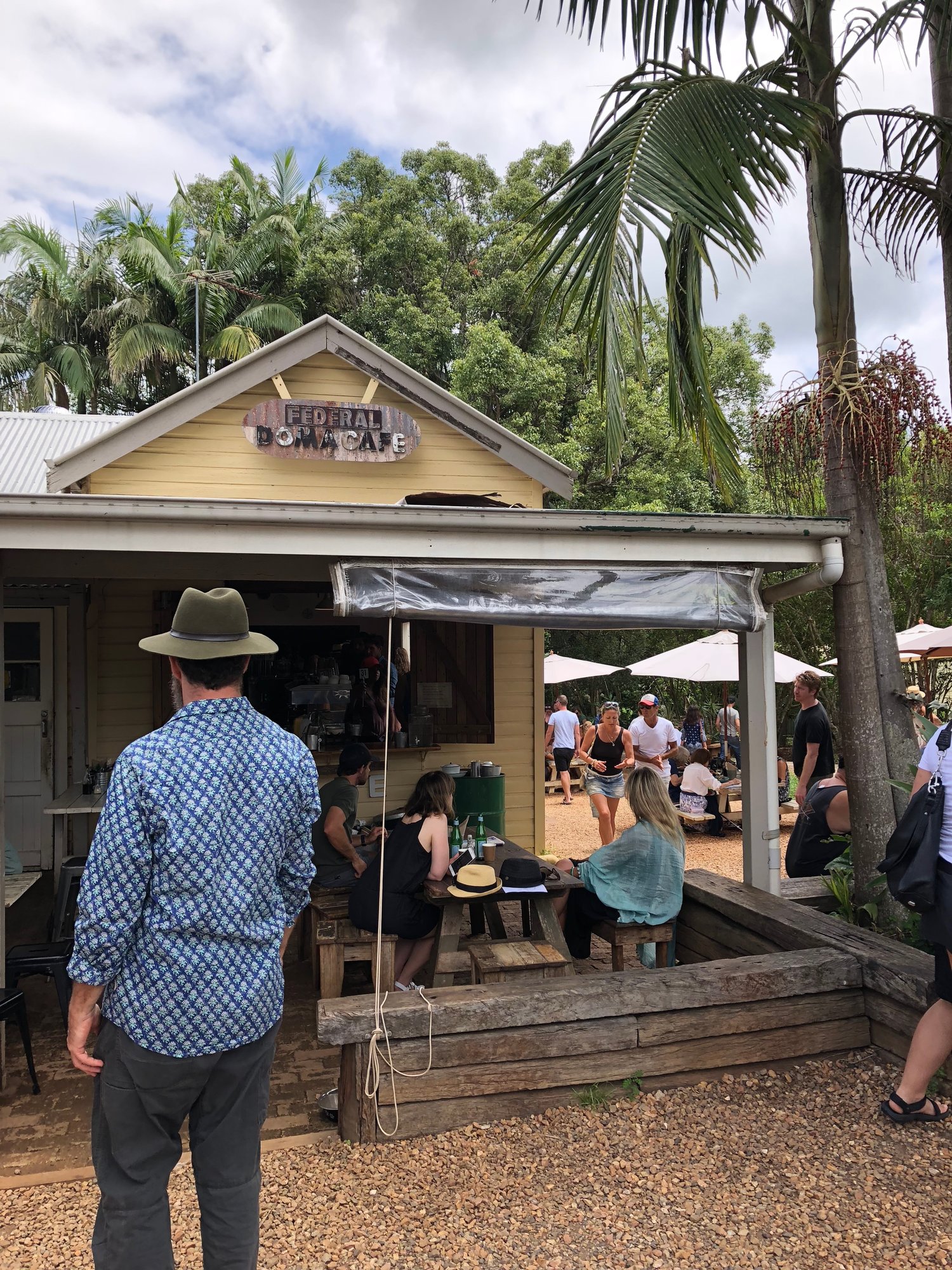 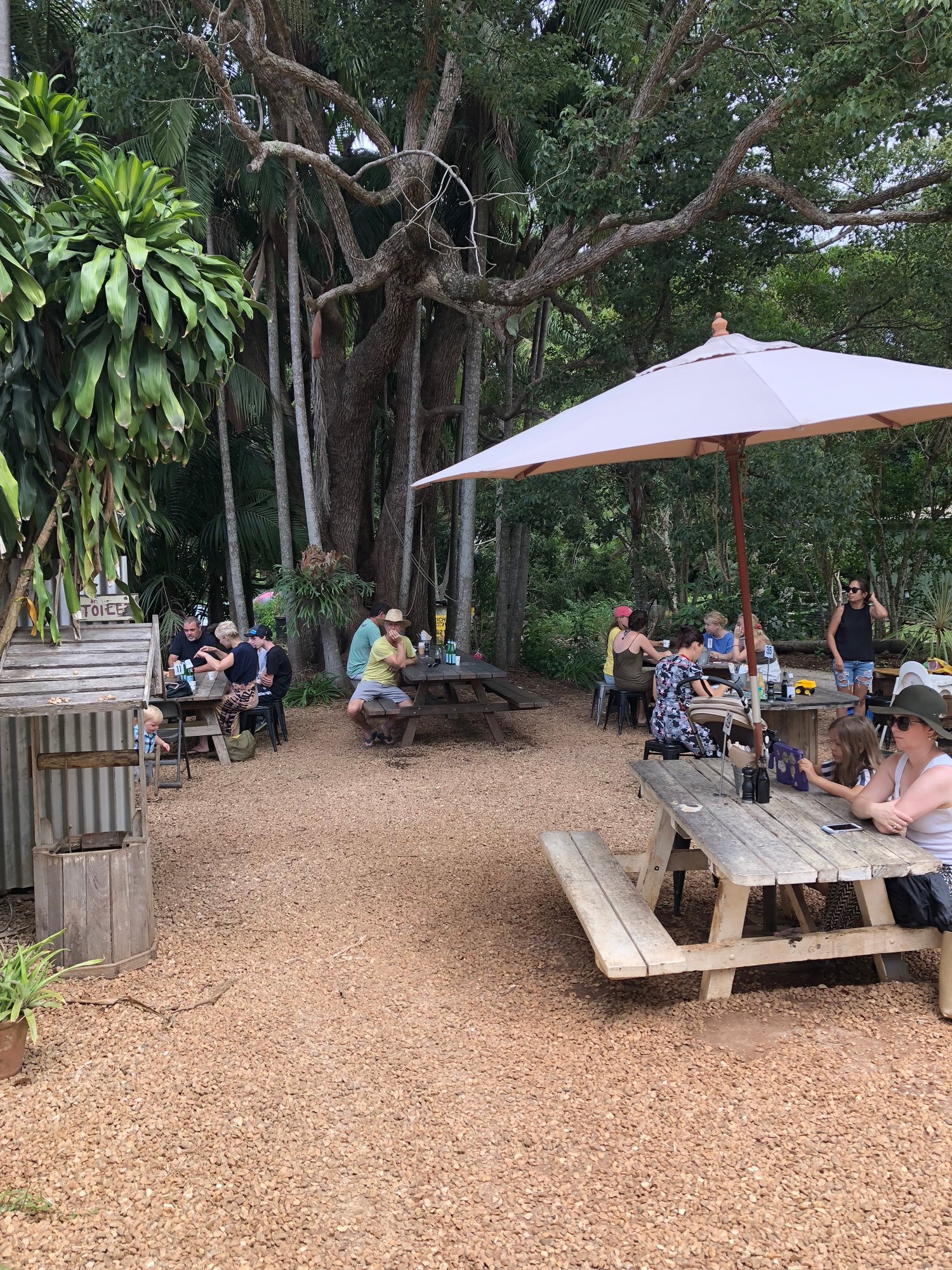 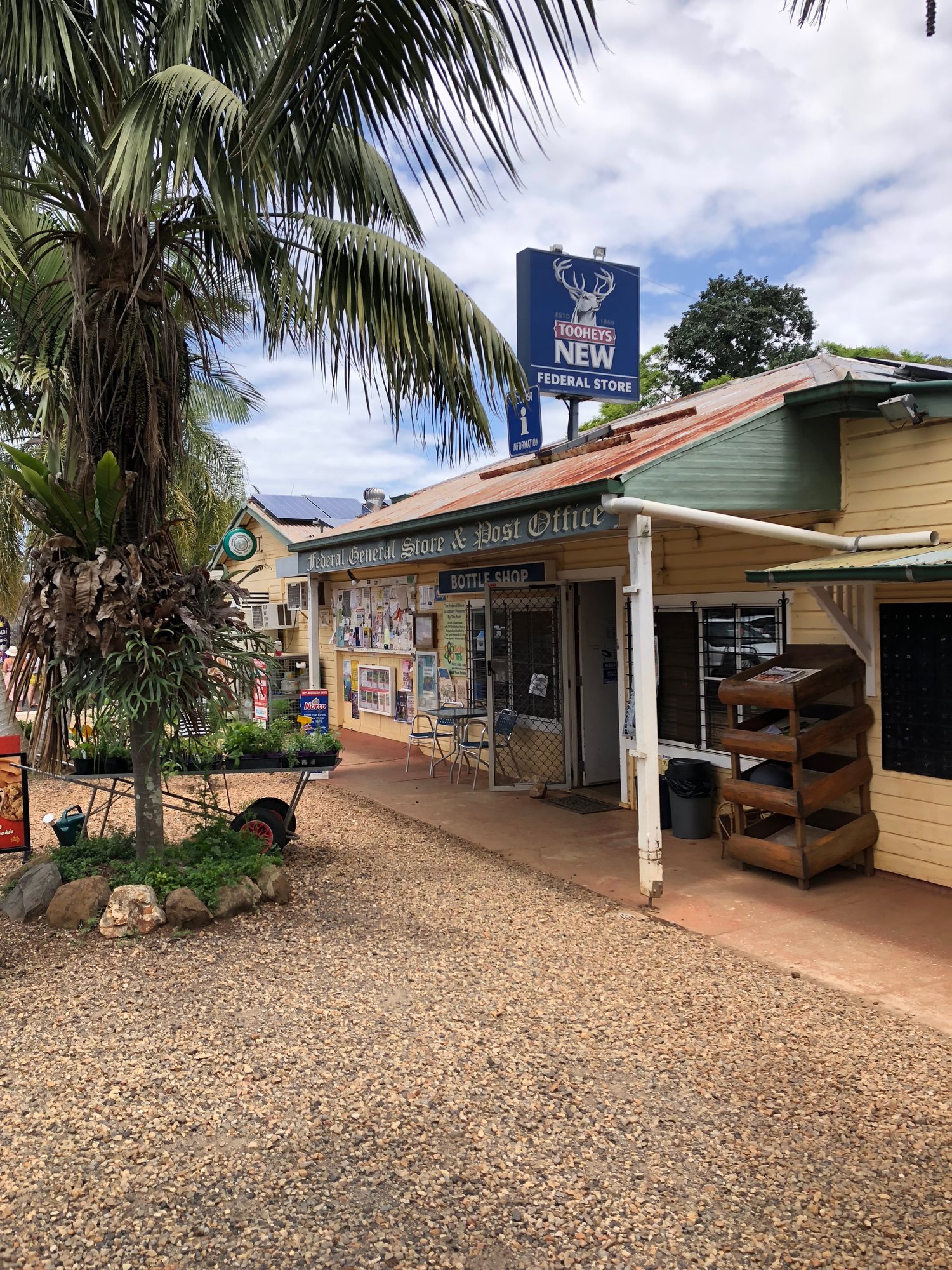 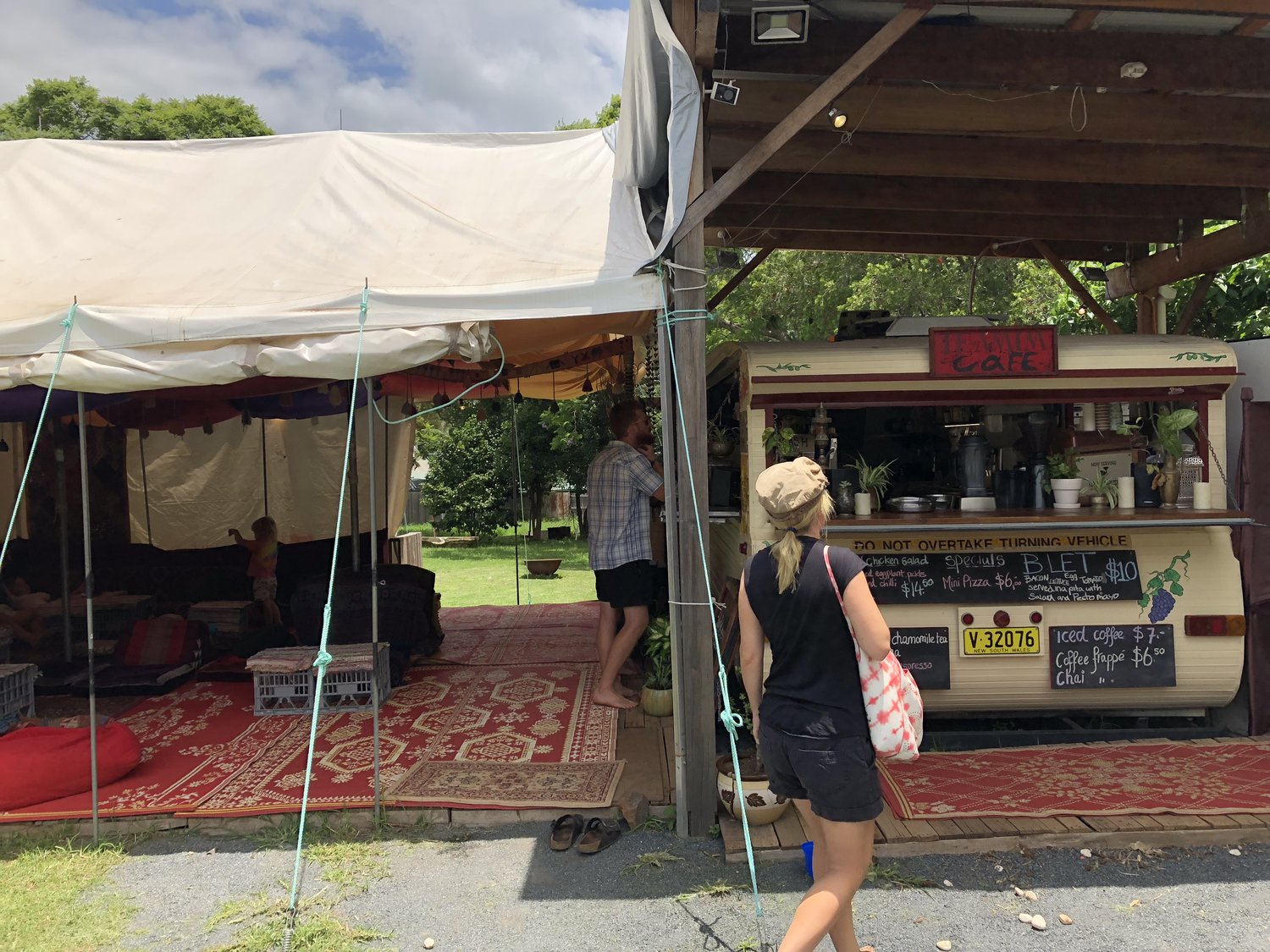 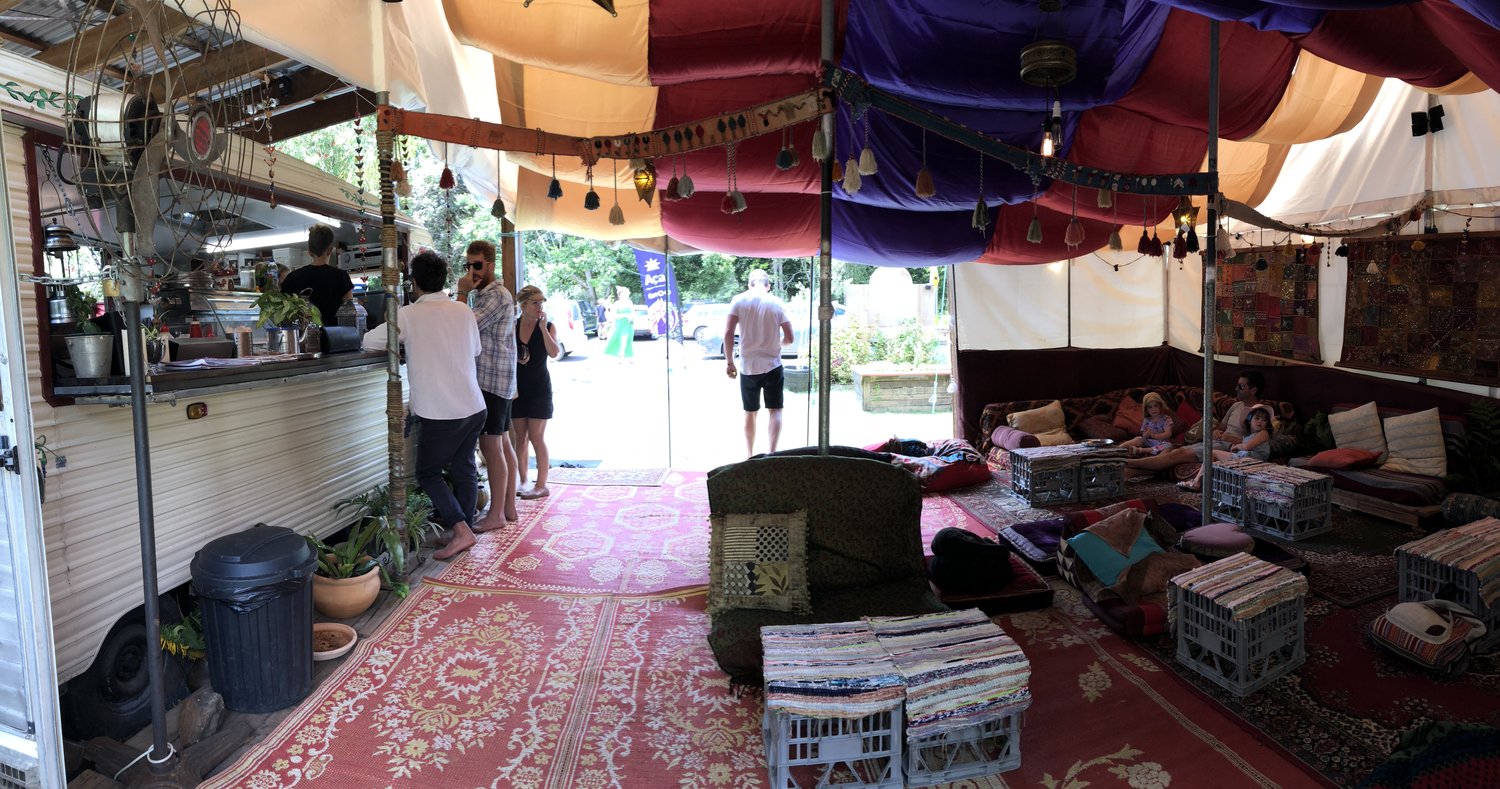 Another town we decided to check out was Nimbin.  I honestly don't even know how to begin describing this place so I googled it and it says "It is as if a smoky avenue of Amsterdam has been placed in the middle of the mountains behind frontier-style building facades. ... Nimbin is a strange place indeed." ...basically it's known as the "Drug Capital of Australia" and it's locals and atmosphere did not stray from this theme. Needless to say we had a pretty funny time there (no Mom, we did not do drugs....) 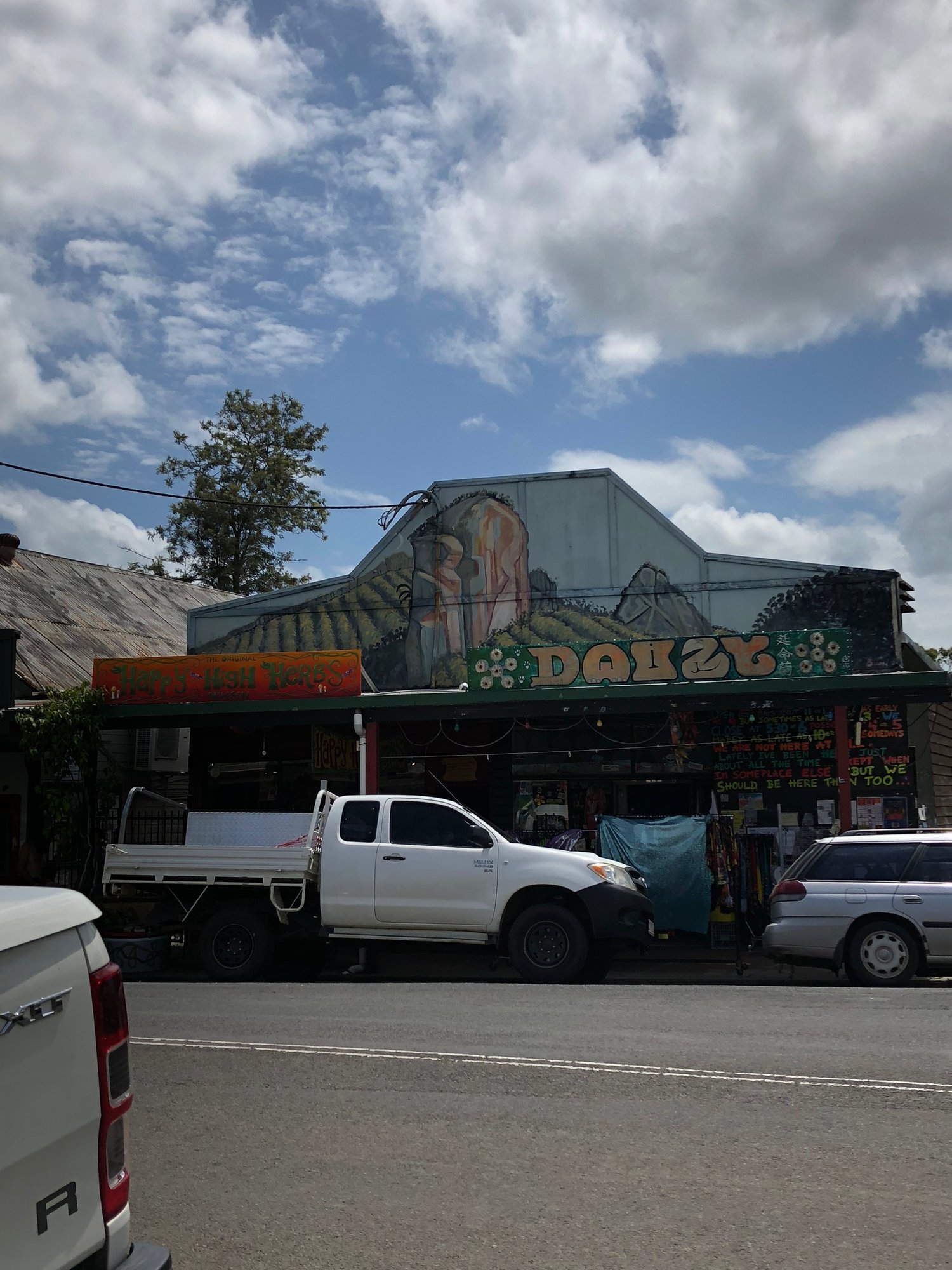 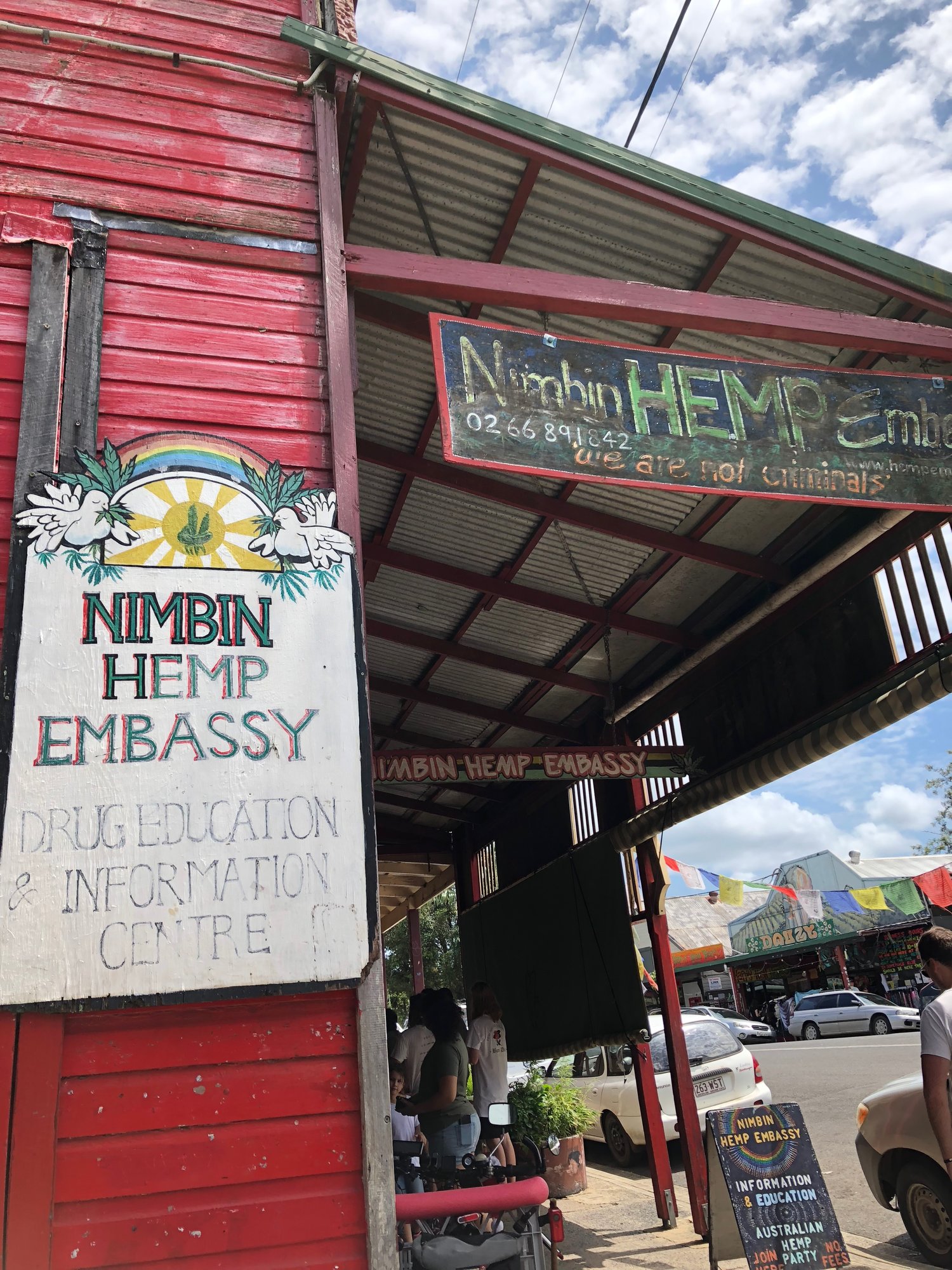 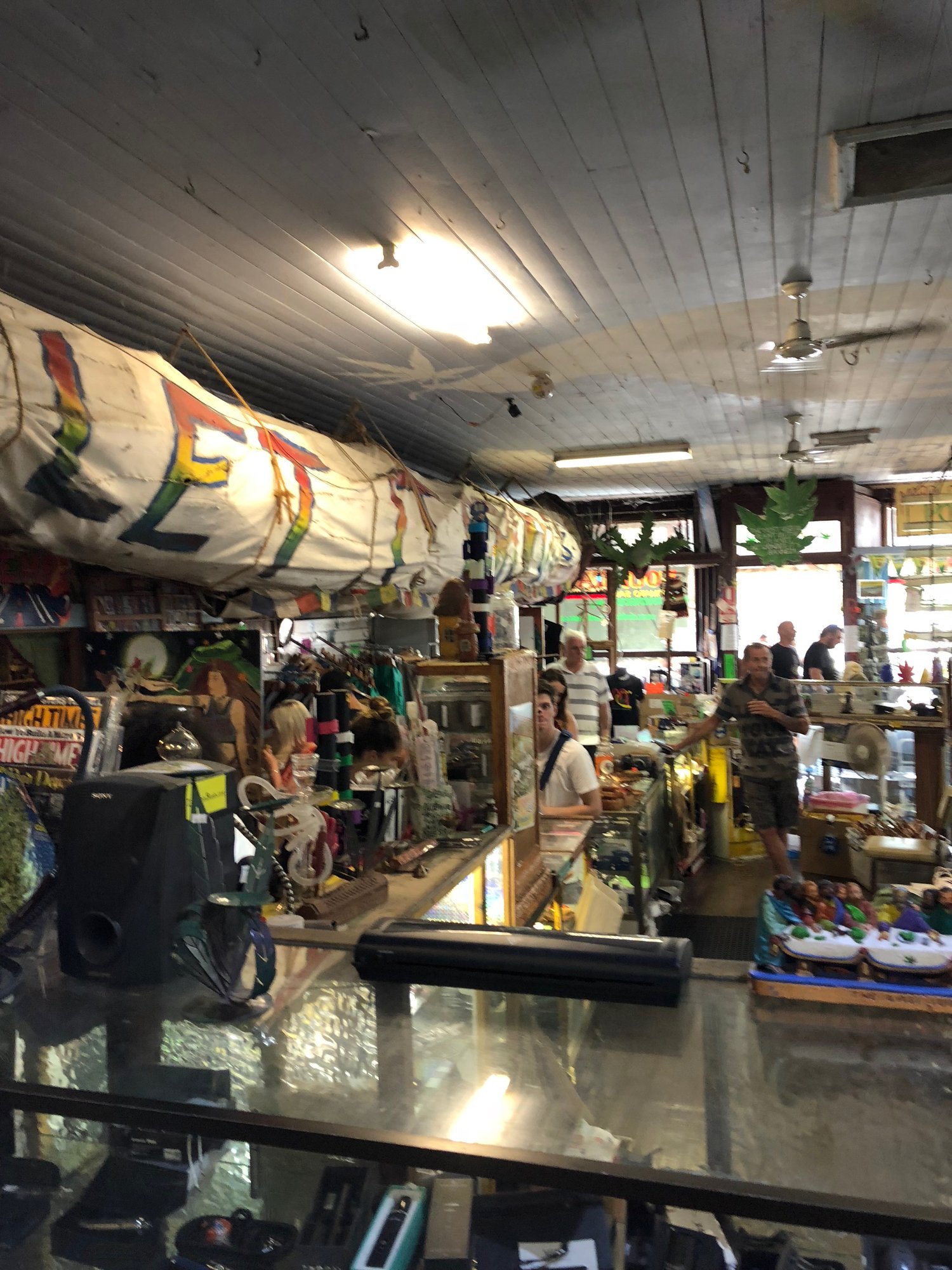 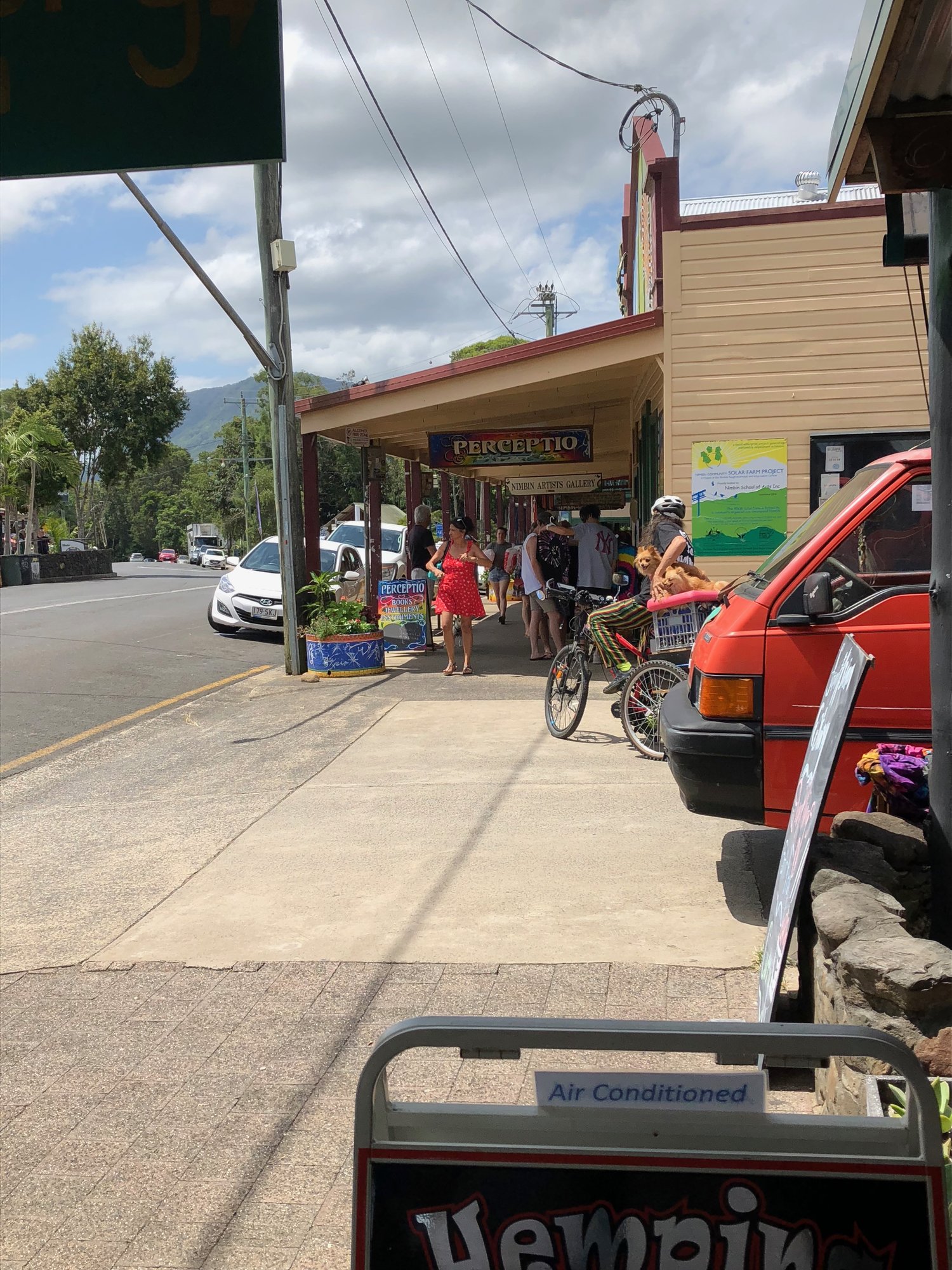 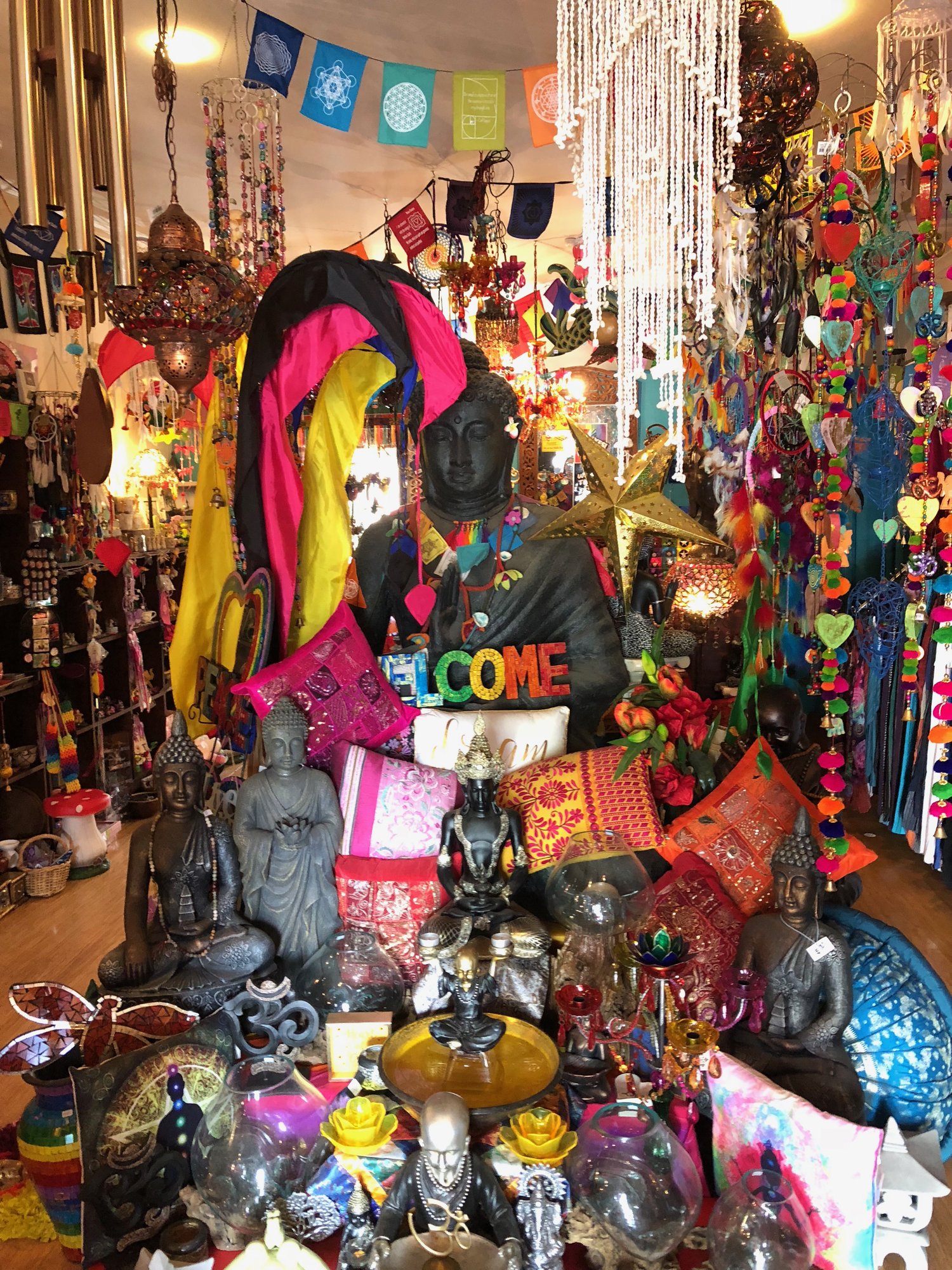 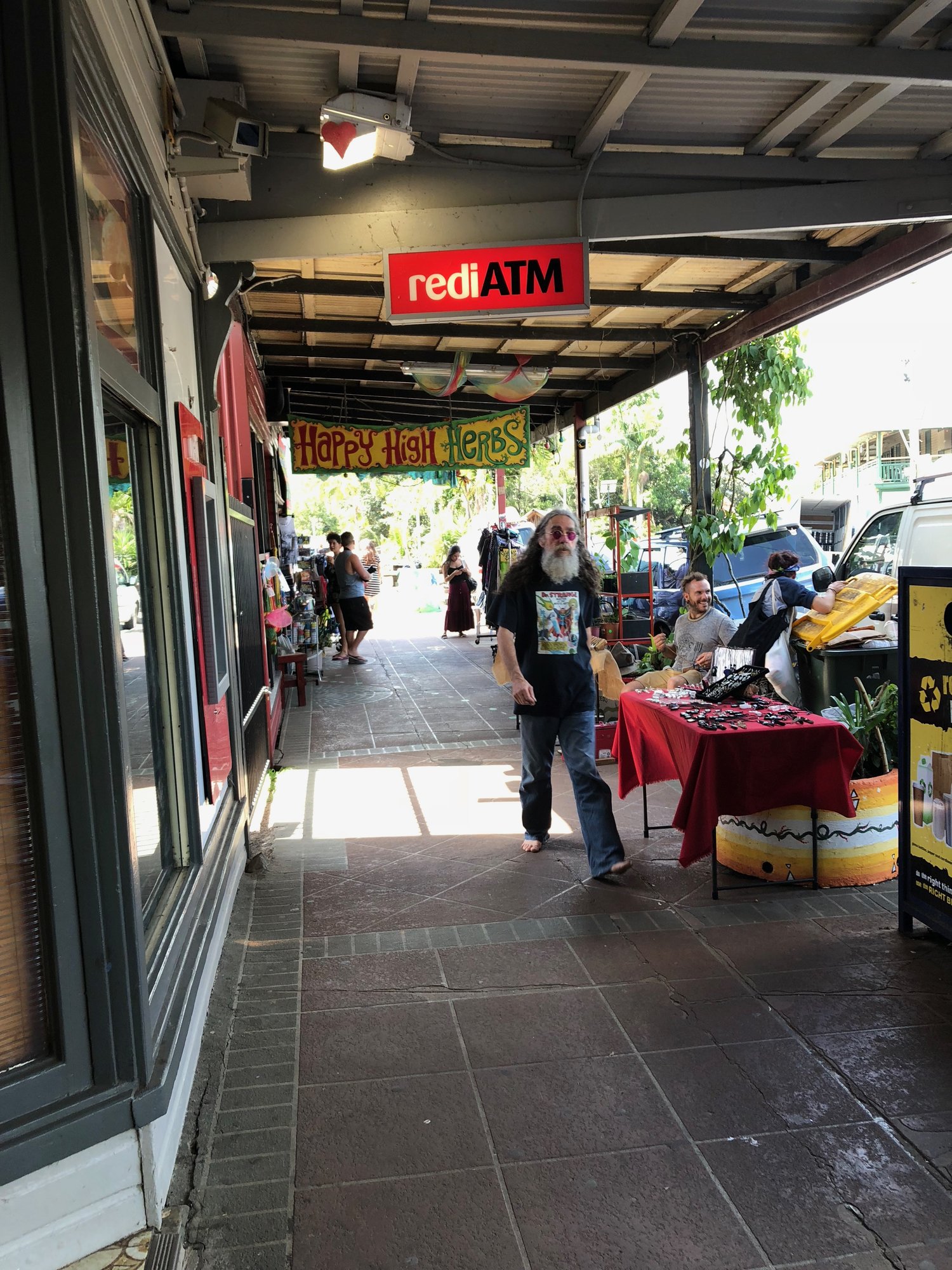 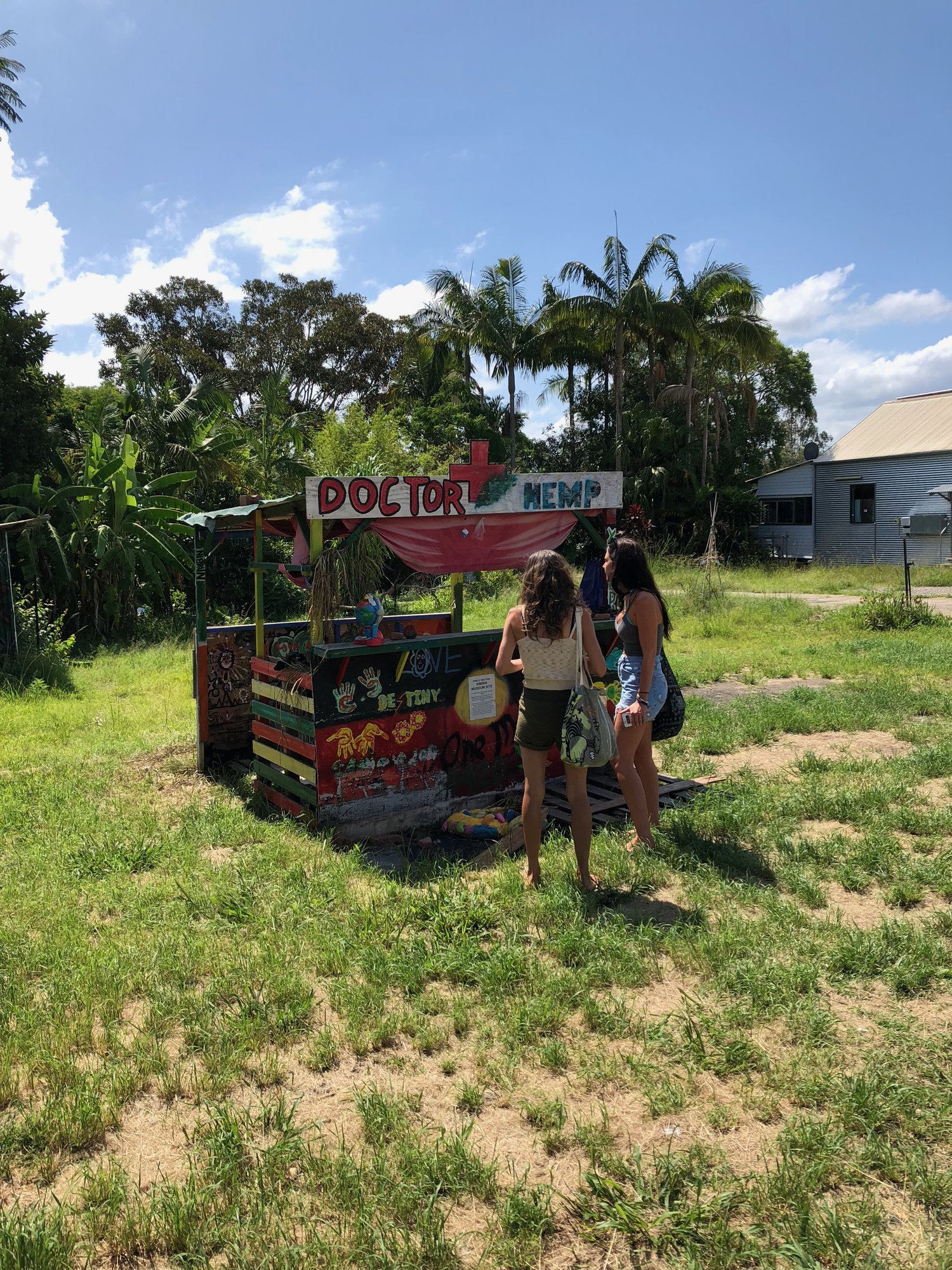 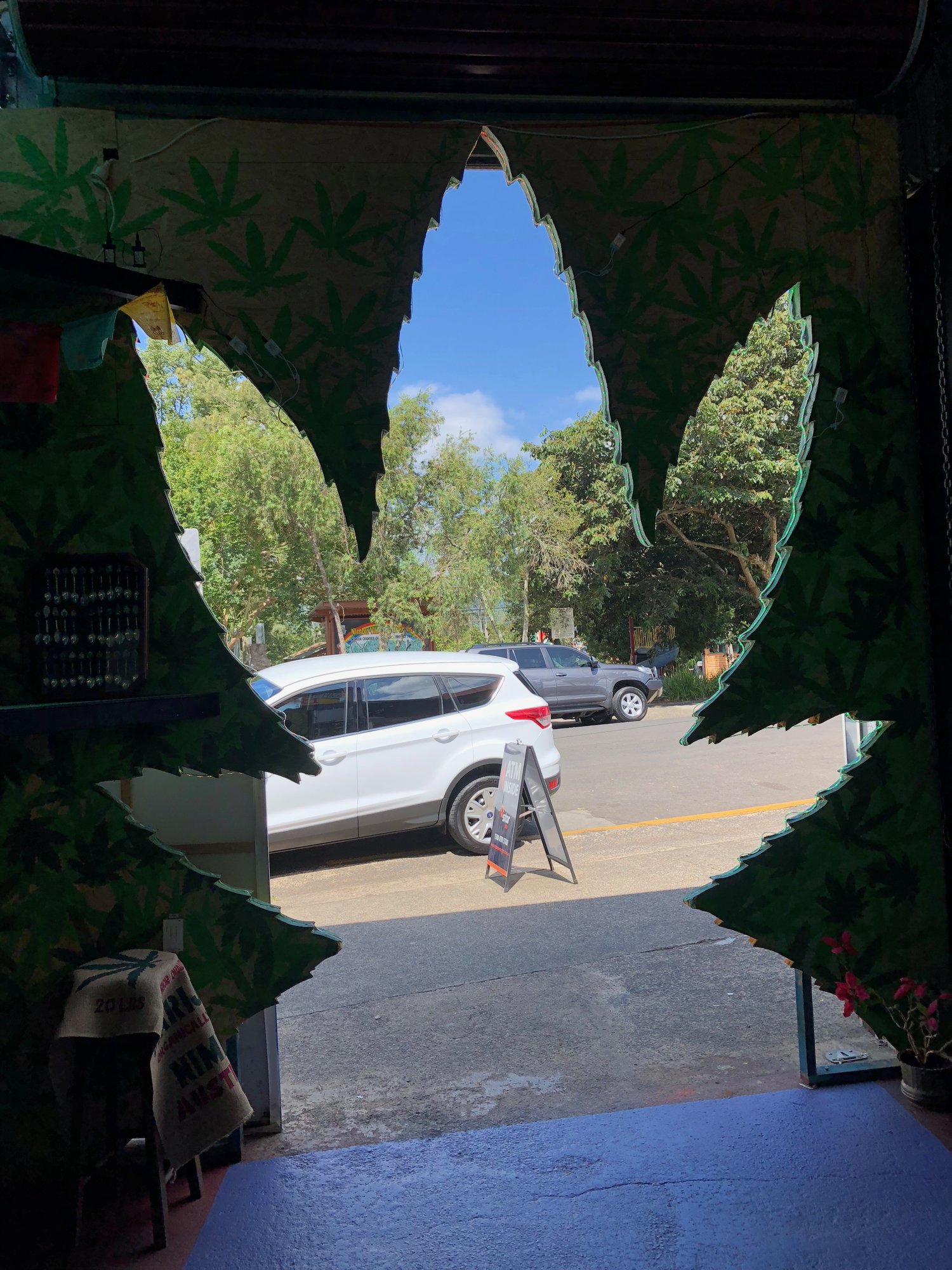 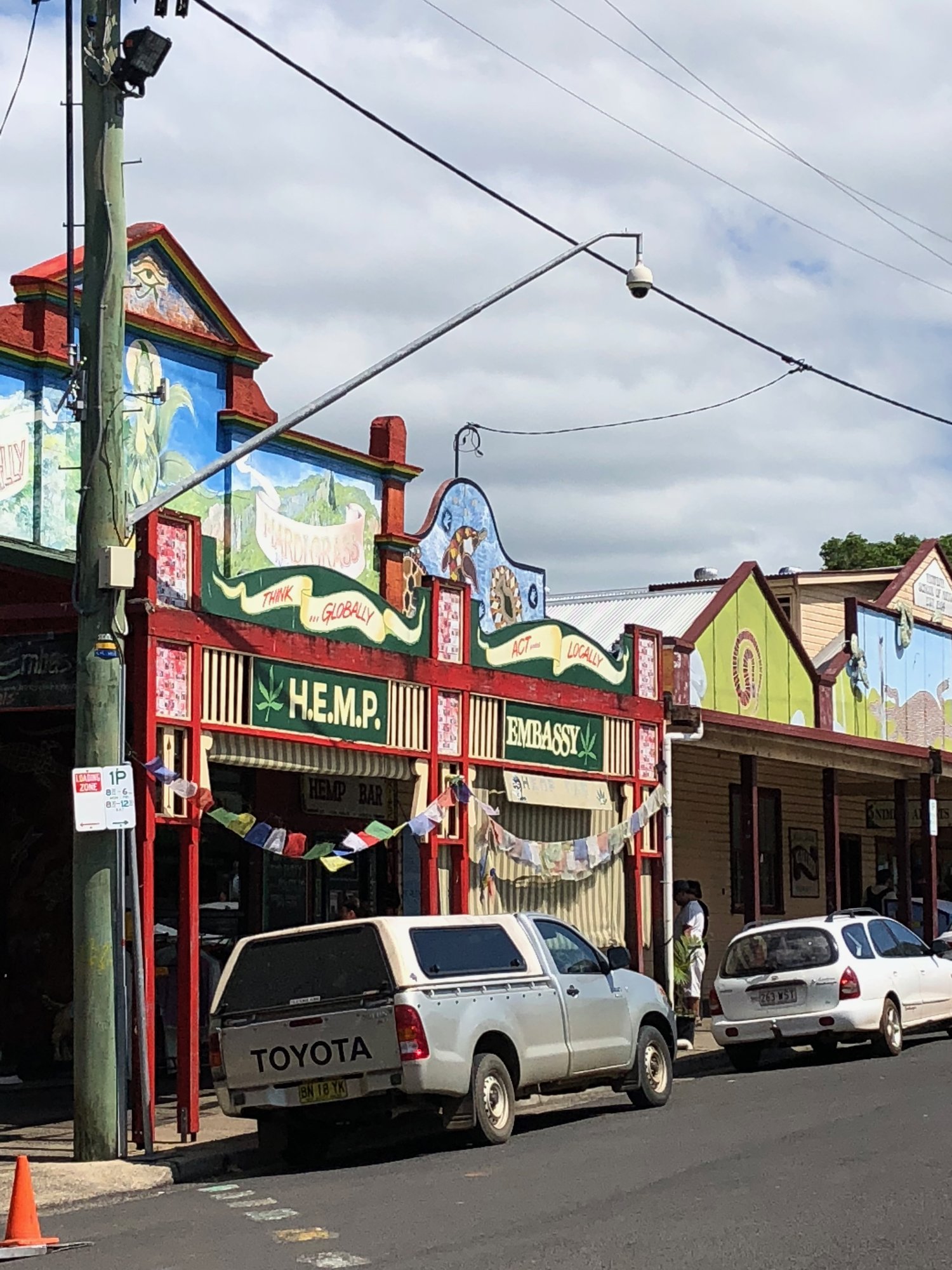 After the most amazing week (to say the least) in Byron it was time to go back to Sydney and celebrate with everyone! I definitely could have stayed forever but we were excited to celebrate with his family and all our friends waiting for us <3

More on what we did around Sydney and my personal favorite (and old home) BONDI coming up in the next post!