A while back I recieved a text from a good friend of mine suggesting I apply to be a TED speaker for the high school she worked at.  Apparently the students have been working on this project for 2 years and finally approached TED to make it a TEDx event. As soon as they got it approved they created an application process to find speakers for the theme "TrailBlazers".

To be honest when I was first told about this I previously had a trip planned to visit my friend in Chicago and didn't really know what a Ted Talk was so I ignored it.  After doing some research and talking to friends and family I realised this was actually a HUGE opportunity and well, kind of a big deal.

3 weeks later I was accepted, and was freaaaking out.  I loved the idea of it but when I got the acceptance email with all of the details, the information on how many people would see the video (tens of thousands!) , and the pages and pages of release forms and guidelines I nearly sh*t my pants.

For those of you who still don't know, here's a little background on what a Ted Talk is:

TED is a nonprofit devoted to spreading ideas, usually in the form of short, powerful talks (18 minutes or less). TED began in 1984 as a conference where Technology, Entertainment and Design converged, and today covers almost all topics — from science to business to global issues — in more than 100 languages. Meanwhile, independently run TEDx events help share ideas in communities around the world.

TED is a global community, welcoming people from every discipline and culture who seek a deeper understanding of the world. We believe passionately in the power of ideas to change attitudes, lives and, ultimately, the world. On TED.com, we're building a clearinghouse of free knowledge from the world's most inspired thinkers — and a community of curious souls to engage with ideas and each other, both online and at TED and TEDx events around the world, all year long. Everything we do is driven by this goal: How can we best spread great ideas?

TED is owned by a nonprofit, nonpartisan foundation. Our agenda is to make great ideas accessible and spark conversation.

So there I was, stuck with an extremely vague topic and told I have 8-15 minutes to speak with no notecards.  I knew my goal was to motivate people to pursue their dream and give an inside look at the life and path of an entrepreneur.  My biggest challenge would be, how do I speak to these people and motivate them without it being boring (just speaking about me the whole time) and/or cheesy ("you can do it! Reach for the stars!").  So what I did was create an outline and a goal.  My goal was to motivate using the past experiences I went through that were bad that eventually lead me to better things and my own business. The outline actually was a requirement from the team, I had due dates for rough drafts and slide previews months leading up to the event.

What I didn't know was that the Tedx requires 100 people maximum to attend the event.  These people are actually specifically chosen through an application THEY fill out to be selected.  Each of them with the desire to learn, discuss and engage throughout the whole night.  I was one of 5 speakers for that night, all of whom were "trailblazers" in their own way.

I didn't finish writing my speech until about 2 weeks prior (even though I knew about the event for about 4 months).  I always seem to do my best work in a crunch.  My father had given me the advice to "practice the sh*t out of it", so, I did.  I printed it out and kept it in my purse EVERYwhere I went. On the subway I would practice it in my head, in my apartment facing the window to building across the street, at the gym on the treadmill, lying in bed at night...everywhere.  Maybe it was playing piano my entire adolescence that helped me with this, but after a week of non stop praciticing after a while it just became (brain)muscle memory. I wish I took a picture of my speech as it was so worn in from folding it up a million times.  A week before the show I felt ready, still extremely nervous (and losing sleep) but I couldn't have been prepared more.

The day of I took the 2 hour drive to Randolph, NJ where the event was held at the high school.  I show up and the place was filled with balloons, a step and repeat and tables set up for food during intermission. As soon as I got there the girl in charge tells me I'm not only the closing speaker, but that there's a Q & A afterwards.  I think they were trying to kill me.

My sister, younger brother and boyfriend took a separate car (so they didn't have to come super early) and met me there and I couldn't be happier to have them there to support me.  Everyone received a name badge and a gift bag with goodies.  Printed Tedx bracelets, a pamphlet, and a pad and pen to write down notes and "discuss" with others around them in-between speakers.  Prior to that I had a quick run-through on the stage where they gave me a remote to click through my slides and a microphone to test out...which made me feel like Britney Spears.

The first half of the show I was able to sit in the audience with them, which actually helped calm my nerves.  It started off with a guitar player warming everyone up and welcoming them, and then a short film about the construction and deconstruction of a psychiatric hospital. Following that, there was a Charity Organizer, a High School Principle, a visually impaired Paralympian, a Director of Communications for LEAD public schools, and me.

I cannot tell you the extreme high I felt after speaking. I semi-blacked out on stage but I didn't studder or forget a single word. Best. feeling. ever.  As soon as I got off stage and the audience was let out I was flooded with a crowd of people complimenting my story and gushing over my ambition and jewelry line.  Nothing like a bunch of strangers surrounding you with positivity to boost your confidence. I believe perhaps this was because my story is so relatable.  I didn't have a chance of luck or a rich background to launch my career. I had a dream and determination and started from scratch which I think was able to help motivate others to do the same. I personally would have loved advice like this when I was younger, which is what I kind of tried to keep in mind while writing my speech.

At the end of the day, I'll always have this video to look back on and be proud of.  As my dad says, it's a major "feather in my cap" and I couldn't be happier for how it went.  I am so incredibly grateful to have had the opportunity to speak at an event with such an inspiring organization and meet the intelligent individuals who put it together. Also, I'm able to sleep at night again :)

If you haven't seen it yet, check it out below! I'd love to hear your comments or feedback or any other questions which you can leave at the bottom of this post. 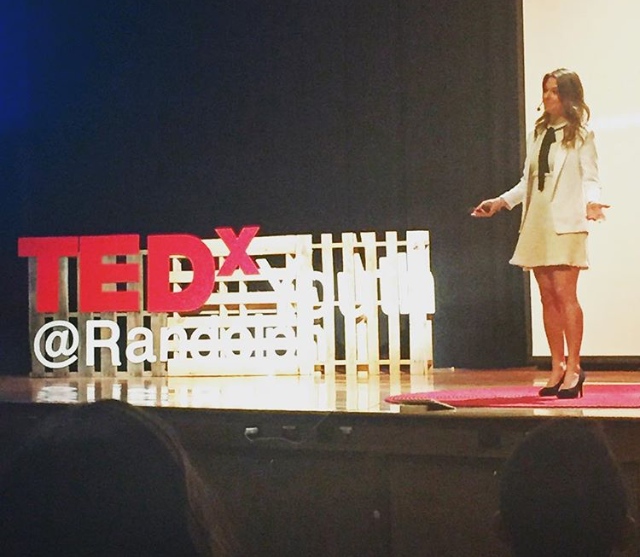 Again, thanks for taking the time to read all about my Ted Talk experience (and watching my video!).  You guys are the best.